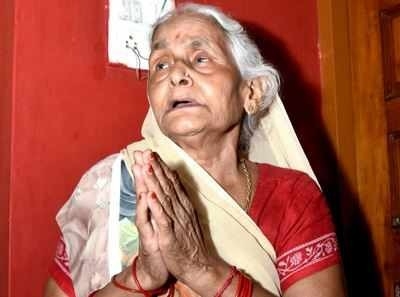 Kanpur:  Sarla Devi, the mother of slain gangster Vikas Dubey, has apologised for the deeds of her son during a visit to her ancestral village Bikru, earlier this week.

Vikas Dubey, accused of killing eight policemen in an ambush on July 3 last year, was killed in an encounter with the police, a week later.

“I really regret giving birth to a crook and I apologise to each and every one who have lost their near and dear ones because of Vikas. However, I have nothing to do with Vikas and his deeds,” she said with folded hands, when a group of women complained to her that her son had ruined several families in the village.

According to sources, Sarla Devi visited the village for the first time after the Bikru massacre and went straight to one Uma Shankar’s house.

Uma Shankar is one among the alleged aides of Vikas and had surrendered later before the police.

From there, she then went to see her ancestral house that was allegedly razed by authorities soon after the Bikru ambush.

After spending a few minutes, she then returned to Uma Shankar’s house, where she had been staying since Tuesday.

A police team was sent to Bikru village after the news of Sarla Devi’s visit spread in the area.

Sleuths of Local Intelligence Units had also visited the village and inquired about the purpose of Sarla’s visit.

It may be recalled that after the Bikru massacre, Sarla had told reporters in Lucknow that she would have no regrets if her son was gunned down for being responsible for an act which claimed the lives of eight policemen.

Later, after Vikas was arrested from Mahakal temple in Ujjain in a dramatic turn of events, Sarla had said that Lord Mahakaal saved her son’s life but also said that the government can do whatever they want to do with him.

She had then told the media persons that Vikas was involved in criminal activities from a young age and did not change his path despite repeated requests by her.