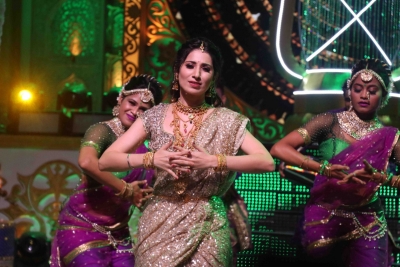 Mumbai: Actress Vrushika Mehta will perform a Lavani act on some current trending songs in �Ganesh Utsav with Zee TV.

She will perform on tracks like �Paani Paani’, �Zaalima’, �Coca Cola’, �Deedar De’ and �Nadiyon Paar’. However, not only her enthralling act, but her attire will also set the festive mood. She will be dressed in a golden Nauvari saree along with accompanying jewellery.

Talking about her act, Vrushika revealed: “My performance for �Ganesh Utsav with Zee TV’ is more like a �Rapchik Lavani’ act because although the songs are new, we have added fast Lavani dance beats to them. It was already challenging to perform different types of songs, which were fast by themselves. Adding Lavani and �ghungru'(anklet bells) beats to them and performing them one after the other was even more challenging for me.”

“I rehearsed for four straight days for this performance. And to be honest, this is the greatest number of days that I have taken out for rehearsals for any of my performances till date. Yet I feel it wasn’t enough! It was a little difficult to match the energy of the songs, especially in such a heavy golden saree with jewellery, but I was extremely happy with the performance and I hope the audience loves it too,” she added.

Along with this, the leads of �Kumkum Bhagya’, �Kundali Bhagya’ and �Bhagya Lakshmi’ will set some major couple goals with their passionate performances.

While Abhi (Shabir Ahluwalia) and Pragya (Sriti Jha) took everyone’s breath away as they danced to ‘Kiston’ and ‘Raataan Lambiyan’ in beautifully crafted white and pink outfits, �Kundali Bhagya’s’ Karan (Dheeraj Dhoopar) and Preeta (Shraddha Arya) sizzled as they performed to �Sakhiyan 2.0′ and �Pal’ in wonderful black and white dresses.