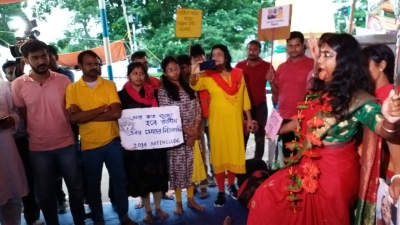 Kolkata: Candidates protesting against West Bengal teachers recruitment scam in at Esplanade in the heart of central Kolkata resorted to a unique protest on the auspicious occasion of Kali Puja on Monday.

One of the woman agitators, dressed like Goddess Kali, considered in Hindu mythology as eliminators of evil forces, came to the protest dais and the other protesters worshipped her praying for punishment of the scamsters.

The protester posing as Goddess Kali, kept her tongue out while carrying a dummy katar (sword) in her hand. On the other hand, instead of replicas of human skull replicas, she was carrying the pictures of former Education Minister Partha Chatterjee and the West Bengal Board of Primary Education’s (WBBPE) former President, Manik Bhattacharya.

While Chatterjee is currently in judicial custody, Bhattacharya is in the custody of Enforcement Directorate (ED) over their alleged involvement in the multi-crore teachers’ recruitment scam.

On Monday, while the protesters were staging such a unique protest, the CPI-M Politburo member and the party’s West Bengal state Secretary, Mohammad Salim, along with some of his associates, reached the protest venue and expressed solidarity with them.

“All the eligible candidates who were deprived of their appointment letters to provide space for ineligible candidates against monetary conditions should be appointed immediately. Those ineligible one who got jobs paying money even after submitting blank optical mark recognition sheets should be terminated from their services immediately. Those within the system who resorted to such corruption should be punished for their misdeeds,” Salim said.

In a sudden police action late on Thursday night, the protesters, who were agitating in front of the WBBPE office at Salt Lake against recruitment scam, were forcefully removed from the area. The development evoked strong criticism not just from the opposition political parties but also from intellectuals, celebrities, and the civil society.