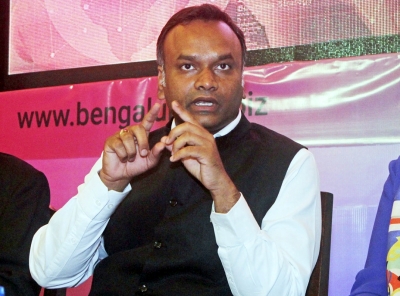 We are ready to shoot you, K’taka BJP leader tells Cong MLA

Kalaburagi: A BJP leader has been booked for issuing a statement to shoot down Congress MLA Priyank Kharge in Karnataka’s Kalaburagi district, police said on Monday.

An FIR has been registered against BJP leader Manikantha Rathod who had issued the statement in response to Kharge, the in-charge of social media in KPCC and son of Congress President Mallikarjun Kharge.

Kharge had stated that he can ensure that no BJP leader is able to move anywhere in the constituency.

In response, Rathod said: “We are ready to die if you (Priyank Kharge) shoot us with an AK-47 gun and also ready to shoot you down as well.

“We are standing behind all communities like an army. We are ready to die. You can shoot us at your will by an AK-47 gun or country made gun.”

Congress workers have staged a protest against BJP and laid siege to the office of the Superintendent of Police of Kalaburagi demanding action against the BJP leader.

Bramhapura police filed the FIR in this regard and booked a case against Rathod under IPC Section 506 for issuing life threat.

The Kharge family holds great influence over the masses in the Kalaburagi district. However, the BJP managed to give a jolt to them by defeating Mallikarjuna Kharge in the last parliamentary elections. Later, Kharge was elected to the Rajya Sabha.

Ruling BJP is also equally influential in the district as the party enjoys the support of powerful Lingayats.

The district is all set to witness political high drama in the upcoming Assembly elections.