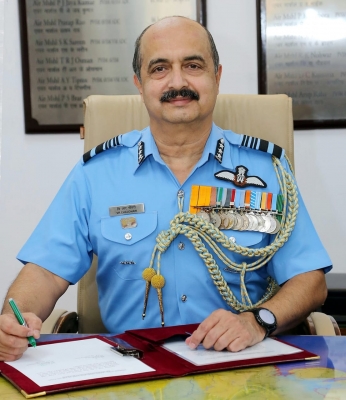 Chandigarh: The Centre on Saturday approved the creation of a weapon systems branch for the Indian Air Force (IAF) officers for the first time since Independence.

Addressing a gathering during the 90th Air Force Day celebrations here, Air Chief Marshal Vivek Ram Chaudhari said, “It is my privilege to announce that the government has approved the creation of a weapon systems branch for the officers of the Indian Air Force.”

“This is the first time since Independence that a new operational branch is being created. The creation of this branch would result in savings of over Rs 3,400 crore due to the reduced expenditure on flying training,” he said.

This was the first time that the annual day celebrations were held outside the National Capital Region (NCR).

The Defence Ministry said in a statement, “In a historic step for the Indian Air Force (IAF), the government has approved the creation of a new branch called the weapon systems branch.”

The creation of this branch would entail unification of all weapon system operators under one entity dedicated to the operational employment of all ground-based and specialist airborne weapon systems.

“We are increasingly seeing the convergence of all these domains in one continuum in the form of hybrid warfare. The conventional systems and weapons will need to be augmented by modern, flexible and adaptive technology,” Chaudhari said while emphasising on ‘Make in India’ and ‘Aatmanirbhar Bharat’.

“We’ve inherited the proud legacy curated by sheer hard work, perseverance and vision of our predecessors. We must acknowledge the contributions of our veterans who chartered this course. Now the onus is on us to usher IAF into the centenary decade.”

Speaking about the synergy of all three services – the Army, Navy and Air Force – he said, “One single service can’t win a war on its own. Work is in progress to enhance the jointness of three services.”

The Air Chief Marshal also spoke about the recently-launched Agnipath scheme, saying, “Induction of air warriors into IAF through the Agnipath scheme is a challenge for all of us. But more importantly, it’s an opportunity for us to harness the potential of India’s youth and channelise it towards the service of the nation.

“We’ve changed our operational training methodology to ensure that each Agniveer is equipped with the right skills and knowledge to start a career in IAF. In December this year, we’d be inducting 3,000 ‘Agniveer Vayu’ for initial training. This number will go up in the years to come.”

The Air Force chief also said that next year, the force will induct women Agniveers.

“We are also planning to induct women Agniveers starting next year. Creation of infrastructure is in progress and streamlining of trade structures is being finalised,” he said.

A ceremonial parade was organised at the Air Force Station to mark the occasion with Chaudhari taking the salute.

Earlier, the IAF chief reviewed the ceremonial parade commanded by Group Captain Anoop Singh, with a three aircraft formation of Mi-17 helicopters trooping the IAF ensign followed by a formation of three Rudra helicopters flying past the saluting dais in an aerial salute.

The IAF’s new combat uniform was also unveiled on the occasion.