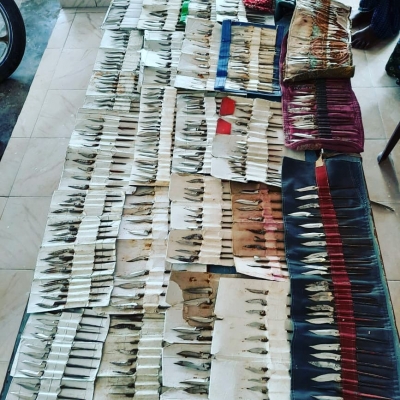 ArrayEluru: Andhra Pradesh’s West Godavari district police have seized 482 knives, used for tying them to the feet of cocks during cockfights, as part of their crackdown on illegal activities in Sankranti on Saturday.

Police seized the knives from three people at Mupparthipadu centre in Ganapavaram mandal, the epicentre of cockfights.

“On investigation, the trio said they were making arrangements for Sankranti cockfights and to tie the knives to cocks during the festival,” said an official.

Not everyone is allowed to fasten the knives as only experts are allowed, considering a princely sum is at stake on the cocks during the Sankrati cockfight gambling.

Similarly, police intensified their vigil on other forms of betting such as gundata (dice rolled board game), poker and others.

This gambling equipment was recovered from a shed near paddy fields.

He called for coordination between the police, revenue and animal welfare departments in this effort.

Kumar directed that teams comprising a tehsildar, sub inspector and an animal welfare official must fan out into the villages with public address systems to make announcements about the forbidden activities.

Likewise, Prakasam district police are also making similar arrangements. “It is a legal offence to conduct cockfights and bettings during the Sankranti festival, as per the orders of the High Court,a said a Prakasam district official.

In addition to public announcements, panchayat secretaries and village revenue officers are expected to paste notices that cockfights are not allowed in farmlands, gardens, villages and public places.

“The joint inspection team constituted as per the directives of the High Court, has the power to carry out raids on cockfights, seize the cash (betting amount) and roosters, and take legal action against organisers,” he said.