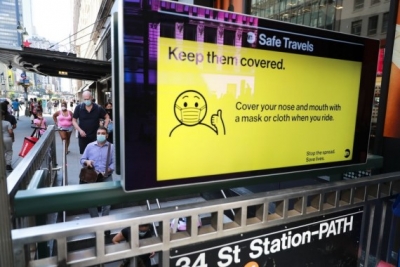 Washington: The White House Coronavirus Task Force has warned of a possibility that there would be a more transmissible Covid-19 variant that evolved in the US.

The new strain, in addition to the variant found in Britain, is already spreading in communities and may be 50 per cent more transmissible, according to a report obtained by US media that the task force issued to states on January 3.

The task force said the recent spike in cases has been at nearly twice the rate seen in the spring and summer seasons, Xinhua news agency quoted the report as saying.

“This acceleration suggests there may be a ‘USA variant’ that has evolved here, in addition to the UK variant that is already spreading in our communities and may be 50 per cent more transmissible,” said the report, calling for aggressive mitigation to match a much more aggressive virus.

“Without uniform implementation of effective face masking (two or three ply and well-fitting) and strict social distancing, epidemics could quickly worsen as these variants spread and become predominant,” it added.

Scott Gottlieb, the former Commissioner of the Food and Drug Administration, told CNBC News on Friday that the new strain the Task Force has found appears to be behaving like the one circulating in the UK.

The latest development came as the country has identified a total of 52 cases the British coronavirus variant, according to data updated on Thursday by the Centers for Disease Control and Prevention (CDC).

Twenty-six cases were reported in in California, 22 in Florida, two in Colorado, and one each in Georgia and New York.

The variant first identified in Britain seems to spread more easily and quickly than other variants.

Currently, there is no evidence that it causes more severe illness or increased risk of death, according to the CDC.

As the country is struggling to speed up its Covid-19 vaccine rollout, the Task Force report said that vaccines must “be put in arms now”.

“Do not delay the rapid immunisation of those over 65 and vulnerable to severe disease; recommend creation of high throughput vaccination sites with use of EMT personnel to monitor for potential anaphylaxis and fully utilise nursing students.

“No vaccines should be in freezers but should instead be put in arms now; active and aggressive immunization in the face of this surge would save lives,” the report added.

The US, currently the hardest-hit country in the world, has so far recorded 21,857,293 coronavirus cases and 368,736 deaths, according to the latest figures by the Johns Hopkins University.