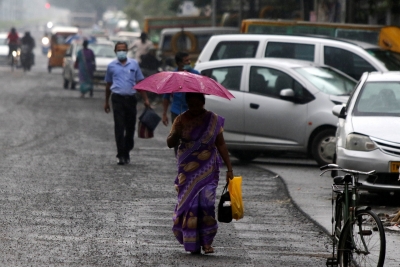 Bengaluru: Widespread rains, cold winds and foggy conditions in the wee hours have been predicted to occur over the next three days in many Karnataka districts due to cyclonic circulation and surface winds, a weather official said on Thursday.

“Many districts across the southern state will receive moderate to heavy rains over the next three days due to cyclonic circulation and a low-level trough over the Arabian Sea on the west and Bay of Bengal on the east,” Indian Meteorological Department (IMD) director C.S. Patil said in a statement here.

Widespread rains are predicted in Malnad and coastal districts, while south and interior parts of the state will receive light to moderate rains till Sunday.

“Yellow alert has been issued for Dakshina Kannada, Uttar Kannada and Udupi districts on the state’s west coast and Chikkamagaluru, Hassan, Kodagu and Shivamogga in the state’s central or Malnad region,” said Patil.

Light to moderate rains were recorded in Bengaluru since Wednesday due to easterly trough.

“Rains will continue to occur in the state’s southern region across the old Mysuru region from Kolar to Chamarajangar over the next 2-3 days due to unseasonal weather patterns in winter,” Patil added.

Easterly winds are strong this season and are moving from the Bay of Bengal towards Sri Lanka.

The state had floods in August and October due to heavy rains during the southwest monsoon from June to September and its extension till early November.