Home Agency News Will ensure trust of people not only through words, but through my... 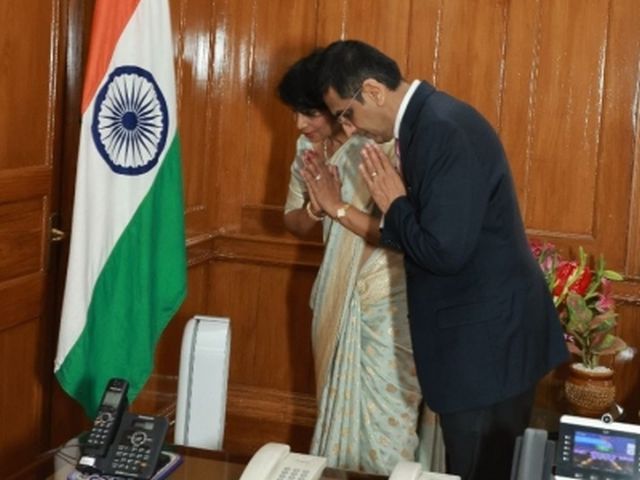 Will ensure trust of people not only through words, but through my work: CJI Chandrachud

New Delhi:  After being sworn-in as the 50th Chief Justice of India (CJI), Justice D.Y. Chandrachud on Wednesday said that serving people of the country was his priority and he will take care of citizens in every aspect.

After the swearing-in ceremony at the Rashtrapati Bhawan, Chief Justice Chandrachud reached the Supreme Court premises and paid floral tributes to Mahatma Gandhi. He said heading the Indian judiciary was a great opportunity and responsibility.

He said that serving common people was his priority and he will work for all the citizens of the country. “Be it in technology or be it in registry or be it in judicial reforms, I will take care of citizens in every aspect,” he said.

Responding to a query on ensuring trust of people in judiciary, the CJI said: “I will ensure trust of citizens not only through words but through my work”.

President Droupadi Murmu on Wednesday administered the oath of office to Justice Chandrachud as the 50th Chief Justice of India.

On October 11, then Chief Justice of India U.U. Lalit named Justice Chandrachud, the senior most judge in the Supreme Court, as his successor. Justice Lalit retired on November 8.

Justice Chandrachud is the son of former Supreme Court judge Y.V. Chandrachud, who was the longest-serving CJI for being in office for about seven years and four months between 1978 to 1985. During his tenure, he overturned two judgments of his father — which were related to adultery and the right to privacy.

Justice Chandrachud practised in the Bombay High Court and the Supreme Court. He passed BA with honours in economics from St Stephen’s College, New Delhi and completed LLB from Campus Law Centre, Delhi University. He also served as the Additional Solicitor General of India from 1998 till 2000. He was first appointed as a judge of the Bombay High Court on March 29, 2000. On May 13, 2016, he was appointed as a judge of the Supreme Court.

Justice Chandrachud has also served as the Chief Justice of the Allahabad High Court since October 31, 2013 until his elevation as an apex court judge. Justice Chandrachud has been a visiting Professor of Comparative Constitutional Law at the University of Mumbai and at Oklahoma University School of Law, US. In June, 1998, he was designated as the senior advocate by the Bombay High Court.