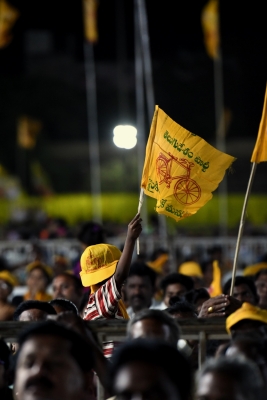 Amaravati: The Telugu Desam Party on Friday resolved to raise the ruling YSRCP’s “ongoing financial terrorism” and “economic crisis” in Andhra Pradesh in the forthcoming Monsoon session of Parliament.

“The TDP MPs would bring to the attention of the Centre and the whole nation how the reckless the Jagan Mohan Reddy regime has been pushing Andhra Pradesh into such severe financial crisis that even salaries were not being paid properly to government employees,” said a TDP leader.

The Parliament would be informed how Rs 41,000 crore of public funds were diverted by the Jagan regime without proper accounts, vouchers and receipts, they claimed.

The TDP MPs asserted that they would also apprise the Centre how Rs 1.78 lakh crore debt was allegedly run up with no development activities in the past two years.

The AP Government was “misguiding the Centre by furnishing wrong figures and numbers by following unparliamentary practices. The CAG has objected that the Jagan regime was straightaway diverting the Central funds that were released for specific people-centric programmes”, they claimed.

According to the TDP MPs, Reddy and his Telangana counterpart K. Chandrasekhar Rao are allegedly enjoying friendly dinners on one hand, while creating “artificial water disputes” on the other.

The AP CM was not able to do anything even though Telangana was using its police in order to wrongfully release water from Srisailam in the name of hydel power generation, they claimed.