Home Agency News Will work day in, day out for the British people: Rishi Sunak 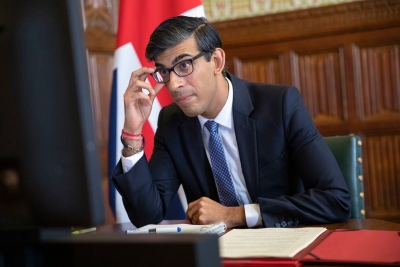 Will work day in, day out for the British people: Rishi Sunak

London: Rishi Sunak, 42, a Conservative party politician who is of Indian descent, will be the next prime minister of Britain. It marks a meteoric rise in British public life, for he became a member of parliament only seven years ago.

In his first, brief public statement after being elevated, he said: “I pledge that I will serve you with integrity and humility; and I will work day in, day out to deliver for the British people.”

It will be the first time a non-white will occupy the position of head of government in the United Kingdom — a major post in international affairs, since Britain is a permanent member of the United Nations Security Council as well as a constituent of the G7 — the most industrialised countries in the world.

The only other contestant in the field Penny Mordaunt dramatically withdrew her cadidature only a couple of minutes before nominations closed with a tweet.

Sir Graham Brady, chairman of the 1922 Committee of the Conservative Parliamentary Party and the returning officer responsible for conducting leadership elections, confirmed ‘we have received only one valid nomination’. He then declared: “Rishi Sunak is therefore elected leader of the Conservative party.”

Born in Southampton to a doctor father and chemist mother, Sunak studied at the private school Winchester College, Oxford University and Stanford University in the US. His professional career was that of an investment banker and hedge fund manager.

He worked as a waiter at a Bangladeshi-owned Indian restaurant in Southampton during his school holidays. While at university, he undertook an internship with the Conservative party at its headquarters in London.

He was elected a member of parliament from the rural seat of Richmond in Yorkshire in 2015.

His first government responsibility was that of parliamentary under-secretary of state for local government.

Then Prime Minister Theresa May appointed him for this in January 2018.

Another former Prime Minister Boris Johnson — who on Sunday night dropped out as a potential contender in the just concluded race — appointed him chief secretary to the treasury in July 2019.

Thereafter, Johnson promoted him to cabinet as chancellor of the exchequer in February 2020.

In July 2022, Sunak resigned from the government citing differences on policy with the prime minister, thereby hastening Johnson’s downfall.

Mordaunt was leader of the House of Commons in the outgoing government of Prime Minister Liz Truss, who was forced to quit on her 45th day in office — the shortest period any premier in the UK has served.

Sunak was expected to be granted an audience by King Charles III imminently to be formally invited to form a government. His immediate task will be to stabilise the British economy after the damage caused to it by Truss.

However, while the new prime minister’s emergence was welcomed by markets and the British pound gained in strength, he will inherit a deeply divided Conservative Parliamentary Party. The ‘STOP RISHI’ MPs hailing from supporters of Johnson, Truss and Mordaunt could make life difficult for the new occupant of 10 Downing Street.

Christopher Chope, MP representing Christchurch in the county of Dorset told The Guardian newspaper: “We have a parliamentary party which is completely riven, and its’ ungovernable.”

Sunak’s shortcoming is his lack of experience in politics. But he also faces a problem from a section of the Conservative party who do not even consider him to be Indian or American (because he held a resident card in the United States). A caller to a chat show on LBC radio station over the weekend categorically maintained, ‘Rishi Sunak isn’t British’, much to the anchor’s horror.

Sunak’s wife is Indian, Akshata Murthy, a businesswoman who is also the daughter of N.R. Narayana Murthy, one of the founders of the Bengaluru-based Infosys.

The couple has two daughters.