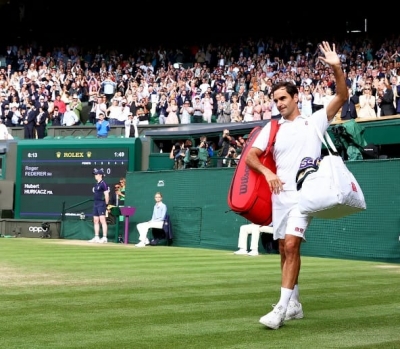 London: Eight-time champion Roger Federer crashed out of Wimbledon Championships, losing 3-6, 6-7(4), 0-6 to 14th seed Hubart Hurkacz of Poland in quarter-finals on Wednesday. But world No. 1 Novak Djokovic recorded his 100th win on grass courts as he beat Marton Fucsovics of Hungary 6-3, 6-4, 6-4 to enter semi-finals.

The former world No. 1 could convert only one of the four break-points while opponent Hurkacz converted five out of 15 break-points. Federer could also win only 67 per cent of points on first serve as against 79 per cent by the Polish player.

Federer had last won a Grand Slam title at the 2018 Australian Open and it is looking unlikely that he will win any more as a lot of youngsters are beginning to challenge him.

The top-seeded player is looking to win his 20th Grand Slam title and draw level with Federer and another former world No. 1 Rafael Nadal as men’s players with most singles titles at tennis’ majors.

“It was a solid performance and I started off really well, particularly in the first five games of the set,” said Djokovic after the match.

“One break of serve in the second and third sets was enough today and I’d like to give credit to Marton for fighting so hard,” he added.

The 34-year-old converted four of the 14 break-points he got and 83 per cent points on first serve. He committed fewer double faults (three) than his Hungarian opponent, who committed five.

Djokovic is now third among players to have entered Wimbledon semi-finals the most number of times. This is his 10th entry to semi-finals at SW19. He is behind Federer (13 appearances) and Jimmy Connors (11 appearances).

The match between Shapovalov and Khachanov was closely-fought.

The 22-year-old Canadian, who entered his first semi-final, managed to prevail in three hours and 26 minutes.