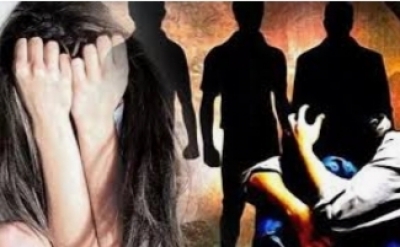 Woman gang-raped by four at ashram in Lucknow

Lucknow: In a second incident reported within 24 hours in Lucknow, a 52-year-old woman was allegedly gang-raped by disciples at a temple-cum-ashram in Gomti Nagar police circle, Police said.

The woman has filed a complaint with the police, who have sent her for the medical examination and registered a case against four persons.

The victim alleged that the head of the ashram did not offer her help and instead threatened her with life if she dared to report the matter to Police.

According to the complainant, the incident took place in the evening on October 4. She had come to the ashram last month.

As per an FIR, the woman reached the ashram through a ‘sanyasini’ whom she had met during Magh mela in Prayagraj earlier this year.

“Earlier I was staying at an ashram in Mathura. This woman was staying at the Lucknow-based ashram. She recommended that I stay at the ashram which was run by her guru. I shifted to Lucknow ashram last month and started living there. However, after some time, the woman had to go to Varanasi as her brother was not well and I was left alone,” she said, adding that on the fateful day, she was offered food laced with sedatives and she fell unconscious.

“When I woke up, I found myself completely naked and my body was trembling. All the four had gang-raped me. When I complained to the head of the ashram, he asked me to keep mum if I wanted to live,” she claimed.

Deputy Commissioner of Police (DCP), east zone, Prachi Singh, said that during investigation the Police came to know about a court case related to some dispute over the ashram property.

The matter would be probed from all angles, the DCP added.

Earlier, an 18-year-old was also gang-raped by an auto driver and his aide in the state capital.