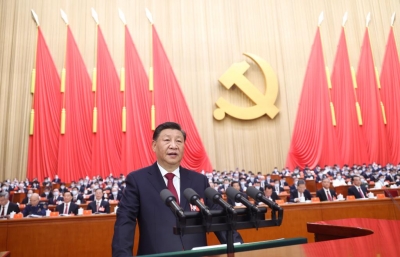 Beijing: As Chinese President Xi Jinping revealed his top leadership team, he also laid out his ambitions for China and reiterated his signature goal for the “rejuvenation of the Chinese nation” — often called the “Chinese dream”, local media reported.

“On the road ahead, no matter high winds, choppy waters, or even dangerous storms, the people will always be our most solid support and strongest confidence,” he said – adding, “The world today faces unprecedented challenges,” CNN reported.

Xi has formally stepped into his third term ruling China, paving the way for “lifelong” rule.

In decades past, when addressing China’s Party Congress, previous leaders had stressed how China was in a “period of important strategic opportunity”, indicating the country was stable and the focus should be on economic growth. But this year, Xi opted not to use that phrase.

“It’s about struggles, it’s about combating these dangerous storms ahead,” she added – which include both domestic difficulties such as an economic slowdown and ongoing Covid disruptions, and international tensions as China adopts a more assertive stance on the world stage. The lineup of the new seven person Politburo Standing Committee is “the latest affirmation of Xi’s absolute power now over the party, and therefore over this nation of 1.4 billion people”, CNN reported.

It indicated that the “old rules” surrounding party leadership – such as succession plans or promotion criteria – “no longer apply”, he added.

Xi himself began straying from precedent in 2018 when he eliminated term limits for the state role of President. Xi is the head of the party, military and state. His real power comes from his capacity as the General Secretary of the ruling Chinese Communist Party, which also controls the military – not from his largely ceremonial role as President of China.

There was also a long-standing unwritten rule that top officials at the age of 68 or over would retire at the Party Congress – but several officials under that age limit are now set to retire, CNN reported.