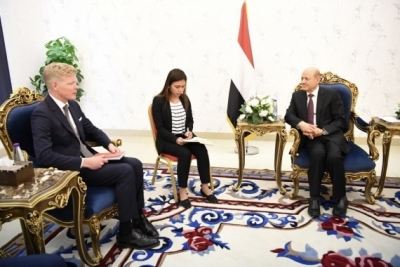 In the meeting, which took place in the Saudi capital Riyadh on Monday, Al-Alimi welcomed the UN efforts to renew the truce, reaffirming his government’s commitment to a “comprehensive peace approach” based on regional agreement and relevant international resolutions.

For his part, Grundberg briefed the PLC Chairman on the latest developments in the UN’s coordination to renew the truce so as to alleviate the suffering of the Yemeni people, Xinhua news agency reported.

According to the Yemeni state news agency, they also discussed “the international pressures required to push the Houthi rebels to fulfill their obligations” under previous UN resolutions.

Last week, Grundberg said he submitted a proposal to the Yemeni warring sides to extend the truce, which will expire within a couple of days. He didn’t elaborate further.

Meanwhile, Houthi spokesman Mohammed Abdulsalam said “paying salaries (to the civil servants in the cities under Houthi control), ending the siege on Sanaa airport and the port of Hodeidah” are among the prerequisites for stability in Yemen, Houthi-run al-Masirah TV reported on Monday, adding that the Houthi group is still studying the proposal.

On April 2, a two-month truce brokered by the United Nations was agreed upon by the government and the Houthi rebels. The truce was later renewed twice through October 2.

Yemen has been mired in a civil war since late 2014 when the Iran-backed Houthi militia seized control of several northern cities and forced the Saudi-backed Yemeni government out of the capital Sanaa.