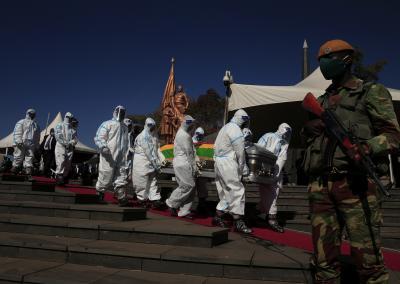 Harare: Some provinces in Zimbabwe are facing a shortage of personal protective equipment (PPE) and healthcare workers at a time when the country is experiencing a third wave of the Covid-19 pandemic, Information Minister Monica Mutsvangwa said on Tuesday.

As a result, Treasury had been directed to urgently release some funds that it had committed for enforcement of the current Level 4 lockdown toward efforts to contain the spread of the disease, Mutsvangwa said during a post-cabinet media briefing.

She said that findings from provinces in the country had indicated a number of constraints in the fight against the pandemic, ranging from vaccine misinformation, shortage of PPE and healthcare workers, and lack of Internet access for most civil servants working from home, the Xinhua news agency reported.

Mutsvangwa said that following the government’s directive for workplaces to decongest to 40 per cent, it had emerged that most civil servants lacked tools of the trade such as laptops, and access to the Internet to be able to work from home.

The minister also added that funerals had become major spreaders of the virus, and she called on relevant authorities including environmental health workers and the police to strengthen enforcement of Covid-19 preventive measures.