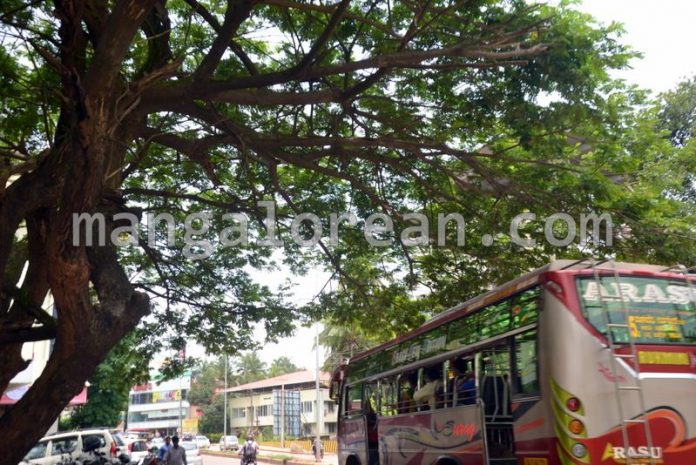 Mangaluru: When a hazardous tree in front of Maharaja Restaurant (near Govt school-Jyothi) on Bunts Hostel Road was chopped down by the MCC for safety reason, during which MCC Mayor Kavita Sanil and MCC Commissioner Mohammed Nazeer had assured that all hazardous trees in the city that pose danger to motorists and pedestrians will be cut within days. But if you look around the city there are quite a few trees which are on the verge of tumbling down, and MCC should look into them soon.There are a few slanting trees on the NH 66 near Nanthoor Junction and few of them on the Nanthoor-Kadri Chef stretch which may anytime collapse. The slanting trees look most dangerous as they have grown old and now due to heavy rain or wind breeze they may fall to the road at any time.

But Team Mangalorean is grateful to Mayor and MCC for cutting down an old tree with hollow bottom near RTO Auto-Rickshaw stand; and also recently the department also trimmed the branches of the line of trees near Fr Muller Auto-rickshaw stand, and also on that stretch of Kankanady-Valencia road which was posing danger to motorists and human life- after both these issues were highlighted in Mangalorean.com before MCC took action. Apart from these two action taken, MCC still has to look into the trees on the NH 66 near Nanthoor Junction and few of them on the Nanthoor-Kadri Chef stretch- because chance is they may uproot or fall anytime during heavy rains or winds.

Having noticing our efforts in highlighting such civic issues affecting the lives of commuters, one of our ardent readers by name of A Prabhum, residing at Capital Apartments/City Gate-near Kadri Jimmy’s Super Market had brought to our notice through his email stating “Dear Mangalorean.Com. Thanks for all your articles on civic issues which may have brought good results. Now bringing to your notice is a tree with rotting roots on the border of city gate / Capitol, near Ballal garage end. At the same place 10 years ago an old tree fell on an ambassador car and two Nuns were trapped inside the vehicle- they were rescued only after the fire service team came. Luckily the nuns escaped with no injuries. Even though we had informed the local corporators about this tree which is hazardous, they have turned a blind eye towards this problem. Please, kindly help through Mayor ma’am. Thanks!”- Regards- Prabhum-City gate / Capitol members / senior citizens.

In response, Team Mangalorean wasting no time made it a point to visit the location of the said tree, and found out that it was on the verge of tumbling down anytime, since many of the bark/branches were dried up- even roots are seen over the soil-also the branches are hanging low on to the streets, when huge vehicles pass by are hit by these branches. Not only that during heavy winds, the branches shake so bad, that chances are they may crack and fall on the moving vehicles. By obliging our reader, Prabhum’s request we are hereby highlighting this hazardous tree, and request the MCC authorities to look into it- and trim the branches- and if necessary take other action?

Apart from this tree, there are many other trees in the City which are leaning/slanting on to the road precariously, and look very fragile and threatening, while some of the infected trees may also be destroying the roots. A couple of these trees have their roots protruding out of the soil, and they may be uprooted anytime, and fall right on the middle of the road. Lately, scores of old trees fell all over the city following strong gales, resulting in damages to vehicles and property. Most of the trees had no room for their roots to spread out and this led to gradual decay.

In other cases, growing trees had their branches cut regularly on one side because they leaned on to private property; the trees grew up lopsided and leaned far on to the roads. This means their remaining branches too were regularly being trimmed and they lost strength. The concerned authorities are expected to monitor a city-wide “tree census” to determine how many trees are really a danger to traffic or at risk of falling down during heavy rain and strong winds. Trees which are unable to bear the air pollution and decaying should also be identified. But seems like no one is doing their job right- and as a result, we have trees come crashing down on vehicles etc now and then.

The problem with our MCC authorities is that they wait till the trees fall, and then only take action–like many trees had fallen due to rains recently. The safety of pedestrians and of all road users should be the first and most important priority for National Highway authorities and also local authorities and also for a State body that has a responsibility in this area. Some of these trees may have the disease, which is a clear indication of root rot. Through this report Team Mangalorean is asking as a matter of urgency that these trees near Nanthoor Junction and also between Nanthoor and Kadri Chef stretch; and also the one tree that is mentioned in this report- are inspected and that those that appear in any way dubious should be promptly removed, before they crash down resulting in injuries or death to motorists or pedestrians.