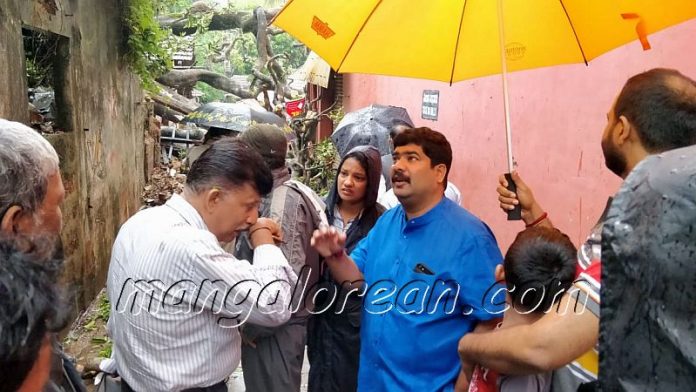 Mangaluru: In spite of falling tree branches and also trees getting uprooted and causing heavy damage to buildings, property, vehicles, and also injuring commuters, the district authorities and MCC Officials have not taken any action in trimming branches or chopping down old hazardous trees. In the past few days, after the city was lashed with torrential rains, with gusty winds, there have been quite a few incidents of trees being uprooted or branches landing on building/homes.vehicles and people.

And once again, in a recent incident, a main branch of a tree fell on the old-building of the famous old restaurant “Akka Makka” in Aithappa Shetty Compound, on K S Rao road, very near to Hampankatta circle-Mangaluru, creating heavy damage to the building, and also damaging a nearby tiled house opposite to the restaurant. Satyavathi, a relative of the owner of the hotel speaking to media said “On Sunday morning around 7 am or so, due to gusty winds and rain, a huge branch of the tree fell on the metal sheet over my room, which came down. Luckily I was out in the yard during that time, if not I would have been injuried”

Sushil, who lives in the house opposite to ‘Akka Makka’ that was also damaged by the fallen tree branch said, ” I had several complaints in the past to the MCC about the danger that this old tree posed, but until now no one cared about it. Due to the negligence of MCC we have to face all these damages now. Will the MCC reimburse the loss amount incurred due to the damages- I bet they wont”.

MLA D. Vedavyas Kamath had visited the spot along with local corporator Poornima and the corporation support staff at around 8 a.m. It took more than six hours for the corporation staff to remove fallen tree branches from the area which has a narrow road for access. Due to traffic chaos on the stretch of this K S Rao road, MCC Mayor Bhaskar Moily had to wait for a while on the road to reach the accident spot, before the traffic police arrived and cleared the traffic. The residents urged the Mayor to prune or cut down old trees in that area which are dangerous to life.

Sources reveal that several other property also were damaged due to rain in the district. In the 24 hours ending at 8 a.m. on Sunday, Dakshina Kannada received an average of 72.4 mm rainfall. While the highest of 79.1 mm was recorded in Bantwal, it was 78.2 mm in Belthangady, 73.5 mm in Mangaluru, 70.6 mm in Puttur and 60.8 mm in Sullia. Officials said that the water-level in the Netravathi at Bantwal stood at 3.8 m against the danger-level of 8.5 m and in Uppinangady, it was at 19 m against the danger-level of 29.5 m.

Sources also reveal that heavy rain and gusty winds damaged a portion of the tiled roof house of Ismail Dappelimar in Subash Nagar in Munnur village near Kuttar. A part of the farmhouse of Sundara in Majaltoota in the same area was also damaged. Urban Development and Housing Minister U.T. Khader visited the two houses and assured the residents of compensation. Falling trees damaged several roadside electricity poles in Kodimbady resulting in disruption of traffic movement on the road between Puttur and Uppinangady. Power was shut down in the area for a few hours on Sunday morning.