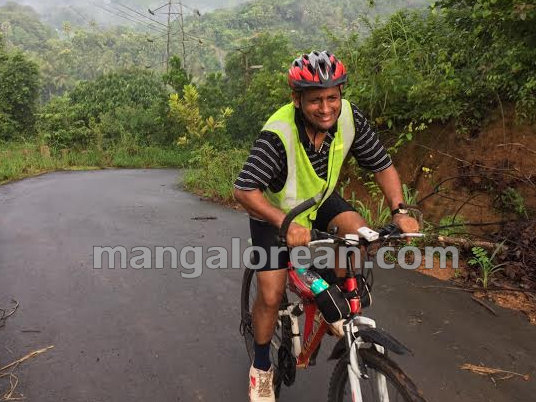 Mangaluru : Riding your bicycle regularly is one of the best ways to reduce your risk of health problems associated with a sedentary lifestyle. And one person who has benefited a lot, including relieving himself from various health problems from regularly cycling is Donald “Donny”Menezes of Mary-Hill here.”Life is like riding a bicycle. To keep your balance, you must keep moving.” had said Albert Einstein- and this cyclist has great passion for cycling that he has enjoyed this hobby by pedaling for fun and glory, and this sport has kept him moving in his life. Not only cycling has kept Donny healthy, it has also brought him name and fame through various cycling records that he has been breaking after he took up cycling only eight months ago. Bravo to a big achiever!

On Aug 18th KOM (King Of Mountain) at a speed of 4 mins 9 seconds-Previous record was 4 mins 11secs.

On Oct 5th, cycling from BC Road- Padil sprint KOM at speed of 26 mins and 20 secs-previous record 27mins 20 secs

On Oct 21, he did two more KOMs, Kavoor climb speed in 1 mins 39 secs-Previous was also 1 mins 39 secs- the same day he did the segment “Fly Baby Fly” in Bejai sprint in 25 seconds- matching the previous record of same timing.

In addition to the above mentioned records, Donny has also to his credit-On September 29, 2015 he set a record by cycling nearly 300 kms from Mangaluru to Byndoor (to and fro) in 14 hrs and 30 mins, a record which no one has achieved in DK. The earlier distance covered in cycling in DK is around 230-250 kms. He also made a record by climbing the elevation (road stretch from Karambar/Kenjar) which leads to Mangalore International Airport, thirty-three times, a total distance of 2697 mts. Earlier record set by Bhavesh of Mangaluru climbing the elevation was 20 times.

In conclusion, pro-cyclist Donny Menezes, turns out he really does just keep going and going, like the Energizer Bunny, the symbol of battery maker Energizer Holdings Inc.,USA -the pink bunny, always pounding a drum, always wearing sunglasses and flip-flops, made his debut in an October 1989 ad and has, well, kept going ever since. Now entering his 26th year, the advertising icon has become famous enough that people who persevere beyond reasonable expectation are often referred to, or call themselves, the “Energizer Bunny.” Nearly three decades later, he is still going strong. The Energizer Bunny -“He speaks to longevity, determination and perseverance. He personifies the Human spirit.”, so does Donny Menezes- who keeps Cycling, and Cycling and Cycling….and simultaneously breaking previous Cycling records! Team Mangalorean wishes Donny more luck and success in his Cycling adventure.

Mangalore: Amateur Cyclist Meets a Pro! Abhishek S from UP Interacts with ‘Nobbie’ D’Souza from DK

Mangaluru: Cyclist Abhishek from UP on his Nationwide ‘Swachh Bharat’ Yatra makes Pit Stop in City

Great going Donyji, I am sure we will stop counting the number of feathers on your cap ,soon, as it is going to be totally crowded .Enjoy and keep inspiring all of us.

Dony,
Your passion and dedication for cycling is outstanding and worth appreciation.You’ve always been encouraging me to take up cycling for healthy stress free life and I am sure to honor your advice shortly.
Keep paddling and I wish you all the best for setting new bench marks.

Dear Dony, Congratulations on your great achievements. We are really proud of you. My support and well wishes always with you. Keep paddling and achieve more KOMs, King of Mangalore. Hahaha

This is amazing. It’s one thing to achieve high speed targets in a controlled, in-door facility. It’s completely different when you are trying to do it in a place like Mangaluru city where the roads and traffic are absolutely dangerous and not designed for bicycles!! This shows that he is not only good in speed and strength, but also in quick reflexes.

More than everything, this is a very positive, healthy thing for mangauluru youth. Good reporting and all the best to this talented man!!

Thanks to all of my admires, and special thanks to Mr Alfie Dsouza, for publishing this article.