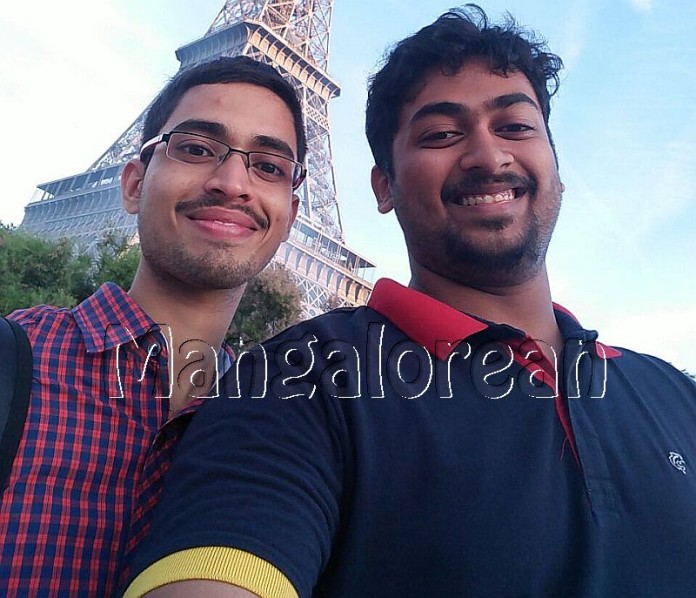 Mangaluru: Viani Antonio D’Cunha and Gahan MG of RV College of engineering, Bangalore participated in two Chess Events in Paris, France and Pardubice, the Czech Republic from July 8th to July 30th, 2016. Chess players from all over the world participated in these two Masters International Fide Chess tournaments.

The participation in Paris open Masters tournament was restricted to players only above 2200 fide rating making it one of the very strong open tournaments. The rating average of this tournament was above 2250+ and there were more than 35 titled players among the 50 participants. Viani started as the 23rd seed and Gahan started as the 41st seed. Both increased rating Elo points and Viani secured 6th place and won the first prize in his rating category for his efforts. He also made his 4th IM norm in this tournament. The tournament was held at Charlety Stadium, Paris from 8th to 18th of July and was organized by Lleague Île-de-France.

The Czech Open was a huge open tournament with more than 1000 chess players participating in all the games and categories. The main A Category had 289 Players from 40+ different countries. The Top seed was Grand Master Surya Shekhar Ganguly from India. Besides the main event, there were events like Blitz Marathon, Rapid and other Blitz tournaments which also attracted good cash prize and top players from different parts of the world. The Blitz Marathon was played for 24 hours at a stretch and 120 games in total. Viani and Gahan not only survived the entire marathon but also won the prizes. Gahan finished credible 5th and Viani finished 11th in the Blitz marathon which was headed by 2706 GM Konenko Dmitry from Ukraine.

The Rapid event was held the next day of the blitz marathon and the rapid event was much more strong and was headed by the world no 20 David Navara from the Czech Republic. There were more than 25 GMs playing in this event and again Viani and Gahan played exceptionally well to finish ahead of many strong Grandmasters and International Masters. Gahan finished 11th place and increased 76 points and Viani increased 15 points.

The main classical event had 40+ Grandmasters and more than 150 titled players. Vani was 132nd seed and Gahan was 169th Seed. Viani and Gahan both increased more than 40 points while Gahan just missed the IM norm by half a point. Viani scored his 5th IM norm and is very close to getting the IM title with the live rating being around 2387. Overall, it was a very good experience and was a successful tour since both of them managed to increase a credible number of rating points and registered victories against Grandmasters and International Masters.