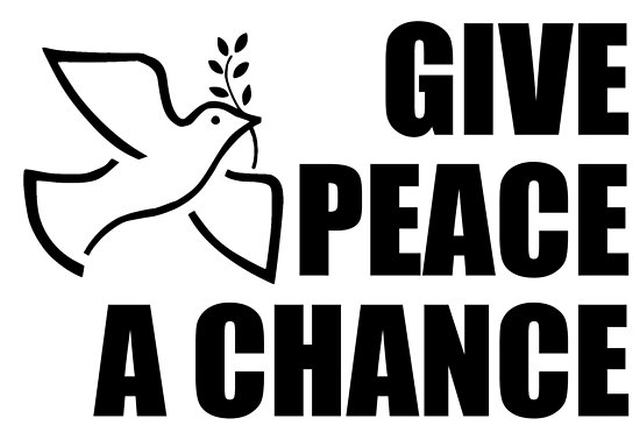 Give Peace a Chance!

Of course Modi was not listening! In the early hours of 26 February, the Indian Air Force apparently crossed the ‘line of control’ (LoC) and carried out air strikes, dropping 1,000 kg. laser –guided bombs on some ‘terrorist camps’ in Pakistan, destroying them completely! The official response of the Pakistani administration denies that there have been any casualties in Pakistan, though they maintain that the Indian Air Force did violate the LoC! So much for the ‘information’ one receives from both sides of the border!

The Government of India and some of the war-mongers in the country have been calling for revenge ever since the Pulwama blood bath of 14 February 2019 in Jammu and Kashmir. With the political fortunes of Narendra Modi and his BJP/RSS combine on an all-time low and with a massive electoral defeat on the cards- Pulwama it seemed was just waiting to happen. The terrible attack on the CRPF convoy deserved condemnation. It came in from every section of society and unequivocally. The forty plus jawans who lost their lives in a single stroke, evoked national sorrow and even outrage. From across the political spectrum there have been statements not merely condemning the terrorist attack but also naming Pakistan for its involvement in the heinous attack.

The Azhar Masood led Jaish-e-Mohammed [JeM] was responsible for the attack. Masood tops the UN Security Council’s list of the most wanted terrorist. The tragic aspect of the attack was that the victims were not on the battle-front but travelling. This sadist criminal has been responsible for countless mass killings and bombings of progressive-secular individuals/organizations and indulges in trafficking of women in Pakistan; he has also been the master mind behind hijacking of Indian Airlines Flight 814 (coming from Kathmandu, Nepal to Delhi) to Kandahar, Afghanistan in December 1999, the Mumbai terror attack in 2008, the attack on Indian Parliament in 2001 and the Pathankot Air Force attack in 2016 besides the latest attack in Pulwama

On 21 February, the United Nations Security Council(UNSC) in a statement said, “The members of the Security Council condemned in the strongest terms the heinous and cowardly suicide bombing in Jammu and Kashmir, which resulted in over 40 Indian paramilitary forces dead and dozens wounded on February 14, 2019, for which Jaish-e-Mohammed (JeM) has claimed responsibility.” Whilst the UNSC resolution is on expected lines – (as it does so for every terrorist attack anywhere in the world), many wondered if India would exercise restraint in dealing with Pakistan.

The cries for vengeance and an attack on Pakistan seemed to grow shriller every day. Pakistan has obviously denied any involvement in the attack. The visit of the Saudi Prince to India and his ‘bonhomie’ with Modi – seem to have ‘delayed’ the response. (Incidentally, Saudi Arabia is known to be responsible for several acts of violence all over the world). However, given the fact that a false sense of nationalism, a misplaced patriotism and jingoism greatly help fascists – it was blatantly clear that sooner or later India would actually indulge in a ‘surgical strike’ on Pakistan. That ‘guess’ has become a reality today!

That there may be another war, does not augur well for both countries. Both have important issues in their own countries to deal with first. Modi and the BJP Government are in the doldrums. They have been losing mass support everywhere particularly as seen in the last State elections, in the Hindi belt. Demonetization has proved to be a heist foisted on the nation; there is growing unemployment, rising pitch of corruption allegations on Rafael and other deals, rise in farmers’ suicides, spiraling violence against women, Dalits and minorities, the privatization of education, fiasco of Citizens Bill which put Hindus against Hindus, loot of banks by people close to Modi and destruction of national institutions like the CBI, RBI and even the Judiciary. More than one million adivasis and other forest dwellers are ordered to be evicted from forest lands over the next four months! Every single global evaluation and report on different parameters have put India in poor light. India as a country has never had it so bad.

An ‘all-out and long-drawn war’ against Pakistan would certainly help to galvanize some sympathy from a naïve and often unthinking electorate, in the run-up to the National elections (significantly the dates have not yet been announced). A couple of days before the Pulwama attack, Mohan Bhagwat , the RSS Supremo said in Muzzarpur that his RSS cadres would need just two to three days to go to war; whereas in the past the army needed six to seven months to do so. Bhagwat’s comments naturally drew flak from all sections of society, but no one is fooled by the fact that he was already talking about “war” even before Pulwama!

There are several major unanswered questions regarding the Pulwama attack, including the fact that Masood and the JeM seem to be strike just before the national election, giving the BJP a distinct advantage. One cannot but help asking if it is a tactical move by the JeM to ensure that the BJP comes back to power and in their scheme of things, destroy India through fragmentation? Or is there a nexus between the JeM and the RSS? It is well known that extremist organizations have no qualms of conscience in collaborating with one another in their evil and insidious designs!

Modi and his ilk may not be stopped in their war cries and games at this moment. The people of India must know better. They need to make their voices heard! They don’t need to sing “Give Peace a Chance!” but to ensure that it becomes a reality in the lives of all people on both sides of the border. Peace is NOT the matter of a choice: it is a must! It is right!