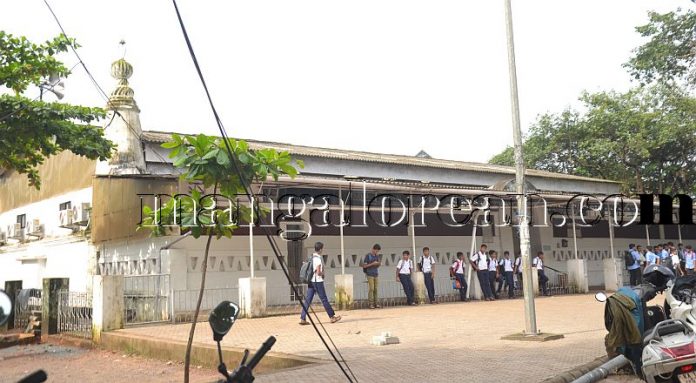 Mangaluru: Seems like a “Amar, Akbar, Anthony’ kind of story? a few days ago, on Saturday 1 July nearly 10,000 students of St Aloysius Institutions took a protest march chanting slogans, like “Anchi Tule Inchi Tule, St Aloysius Road Tule” (meaning See There, See Here, See St Aloysius Road ); “Nyaya Beku Nyaya Beku”; “We Want Justice”; “All Roads Lead to St Aloysius”; “It Was and Will be St Aloysius Road” etc etc in order to retain “SAC Road” from renaming it as “Mulky Sundararama Shetty Road” as planned by the Vijaya Bank Workers Organization, and they were supposed to have a road renaming inauguration on Sunday, 2 July. But due to the constant pressure of the Jesuit priests of SAC, staff and students of SAC, and because of the intervention of the MLC and MLA, the government issued a Stay Order on renaming the ‘Lighthouse Hill Road aka St Aloysius College Road’ to ‘Mulky Sundararama Road”.

Even though there has been backlash from Saffron groups, BJP leaders and few others about the Stay Order decision by Government, and criticizing the role of the Congress MLA and MLC, now The Dakshina Kannada Muslim Sanghatanegala Okkuta is claiming that the present Idgah (a place of worship for Muslims) on top of the hill near the Light House Hill/Tagore Park was the older than St Aloysius Institution and Vijaya Bank Regional Office. K Ashraf, the President of the Okkuta, and also the former MCC Mayor states that, “The Idgah comes under the jurisdiction of Jumma Masjid of Bunder, which was established by Tippu Sultan after he inherited Mangaluru from his Father Hyder Ali in 1784. The place where the Idgah is located now was a large wooded area- so in order to safeguard the territory, a lighthouse and a Canon battery was built on the LHH road.The present Tagore Park was originally named as ‘Tiger Park” after Tippu Sultan. Hence the road leading to this Idgah deserves to be named as ‘Idgah Road”.

Now all these controversies from three communities- Christian, Hindus and Muslims on renaming LHH/St Aloysius College Road has resulted in a big headache for the MCC Mayor and other concerned authorities. A senior MCC authority speaking to media has said, “This is the last thing that the district needed. -communal color accorded to a simple process of naming a road. This was how the Hubballi Idgah Maidan issue came into being in the last decade. we do not want another such issue of that magnitude here in Mangaluru”. but in the meantime, St Aloysius administrators say that the road has been already named and a plaque was embedded at the corner of the road, opposite MCC bank and near KMC.

MCC Mayor Kavitha Sanil states that she is now in a dilemma as the final decision to execute the renaming protocol had to be seconded by the MCC. Seems like the week-long turmoil over renaming a part of LHH Road has now taken a new turn, with Muslims waking up to rename it as Idgah Road. In the meantime, the representatives of St Aloysius Institution, and reps of Vijaya Bank Workers’ Organization have to keep their fingers crossed as to what will be the outcome of this new issue.

The disputed road is of historic significance not just to Mangalore but to entire India. The hill was always ‘Bavuta Gudde’ for the locals. The book ” History and Archaeology of Dakshina Kannada” published by the Department of Archaeology in 2007 throws some light on Bavutagudde ” 3,000-member group led by Puttabasappa alias Kalyana Swamy of Shanivarasanthe, Kedambadi Rame Gowda of Sullia and Banga Arasa of Bangawadi waged a war against the British in Bantwal and Mangalore in March, 1837. They won both Bantwal and Mangalore on April 5, 1837, and released prisoners from Mangalore prison. They set fire to… Read more »

It’s better to name as ‘Idgha Road’ as this masjid is older than the institution and bank. As per the saying all surroundings of the Masjid area belongs to masjid but without proper documentation it was not maintained and others possessed the area. Let’s maintain peace and show the tolerance to other community. its good opportunity to prove that minority community is not always the oppressor.

Just name the road as ‘Light Aloysius Sundaram Idgah Road’ and be done with it — no matter what it is renamed as, the road will anyway be continued to be called Bavuta Gudde Road!

“Now all these controversies from three communities- Christian, Hindus and Muslims on renaming…” – Author.

This is very unfair to Hindoo community. Why does the author view one Vijaya Bank as ‘Hindoo’ community? Did Vijaya bank say that they were doing it on behalf of Hindoo community. On the other hand, St Aloysius College and its supporters are playing religious card ever since beginning of this controversy. This shows how minorities begin the religious tension and then turn around to blame Hindoo community. Very unfortunate to see this mindset even in 2017.

Original R. Pai, Nice to read your post, though I am not commenting on the same as it does not concern me. How are you and how is your family? Mr. Narendra Modi has just completed his three days visit to Israel which, as far as I am concerned, is a thumping success. He was accorded a reception and welcome only accorded to the Pope and the America President. Both the countries have signed many agreements in fields like defence, intelligence, agriculture, water management, solar energy, etc. He also met the Israeli Jews (of Indian origin) and Israelis working there.… Read more »

Though communism has been virtually erased from the globe, I feel disheartened to see some fragmented Leftist parties strutting along to the Lok and Raj Sabhas and their government running the government in Kerala. The Leftist politicians are living in Cuckoo-land and make stupid comments. The Leftists have no relevance today and they should shut their shops and vanish or join some other parties and same applies to Congress, which has not revitalized, streamlined and revamped themselves. Mother and son are running the affairs of Congress which will, certainly, sound a death knell for them.

Nelson Lewis, I’ve been regularly reading your posts. Your views on China and Pakistan with may accurate historic references are something that I fully agree on. I couldn’t agree more with you on India-Israel friendship. India’s foreign policy towards was always hijacked by one particular community (you know who I am talking about). Nehru started the flawed policy by not recognizing and trying to block Israel in UN. India continued with this embarrassing anti-Israel policy for decades. Every Indian should be happy with recent Modi’s Israel visit. Unfortunately, as you have rightly pointed out, some political parties and individuals are… Read more »

Mr. Original R. Pai, Thanks for your speedy response and read your views. Yes, Rahul Gandhi, is the best child artist in India and you should listen and hear the speeches he makes in the Parliament. He is pathetic and makes a fool of himself and provides entertainment to other parliamentarians. Rahul Gandhi’s only right to be in politics is that he is the member of the dynasty and great grandson and grandson of Jawaharlal Nehru and Indira Gandhi, respectively. Sonia and Rahul Gandhi are heading the Congress and aided in this direction by members who are, at best, sycophants… Read more »

Mr. Original R. Pai,
s
Do you have any news about ourcontributors, Mr. Praveen Pinto, Advocate B.N. Pai from Kumbla and one Mr. Shaikh from Jordan?

“he will go and peck the cheeks of Syed Ali Shah Geelani, pseudo preacher, Mirwaiz Umair Farooq, Yasin Malik, Shabbir Shah, Naeem Khan and the ilk. I do not know if he is pecking somewhere else too.” – Writes Nelson Lewis on one shameless Mani Shankar Ayyar from Congress party. Once again, your observations and comments are spot on. I don’t think many Indians are aware of the amount of damage done by likes of Mani Shankar Ayyar, Salmaan Khurshid and parties like Congress and CPI. I strongly believe that they are anti-India. Otherwise, why would anyone push Indian govt… Read more »

” A.p.j abdul kalam road ” will solve all the issues foreva?