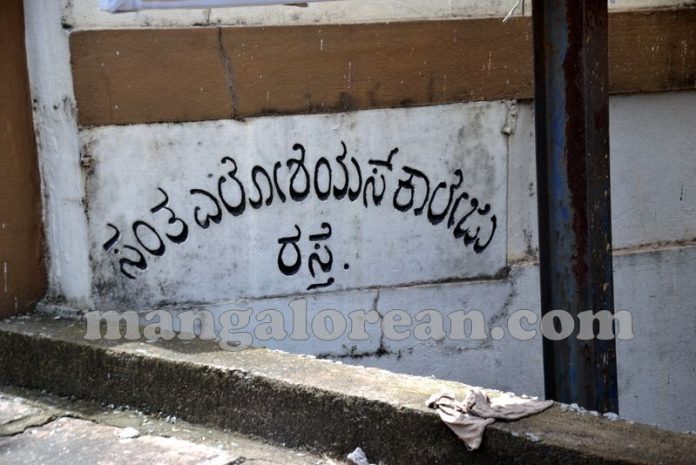 Mangaluru: On the outset, I want to ask, “Is it really necessary to change a street name which has been existing for decades, to a new name which will never be honored/used by anyone in case it gets materialized. Look at some of the new street names which have replaced the old names- and hardly anyone uses them. Like the old name as “Jogi Mutt Road”, which was changed to Sri Vivekananda Road, (from Nanthoor stretch to Kadri Park)- everyone still calls it “Jogi Mutt Road”. Similarly, Falnir Road was rechristened as Mother Teresa Road, but everyone still uses “Falnir Road” in their communications, and even business signs carry the old street name.. And this idea of renaming St Aloysius College Road to Mulky Sundararama Shetty Road is not a right thing to do by Mangaluru City Corporation. Period.

Many citizens want to keep the old street names because they have become a part of their identity. For many of us, street names are no more than simple signposts. Many experts believe it does. If nothing else, most of us say or type our street name on a daily basis, as we give our physical address over the telephone or enter it into a website. For most of us, it is our cultural capital, our cultural history. And it is observed in the breach – you most notice it when a street name is changed. It’s the same as a church or a Temple or Mosque being knocked down: you may never have walked into that Church/Temple/Mosque, you may not be religious, and yet, to most of us, it is an affront, an insult: Someone has changed my environment without consulting me.

How the streets get their new names is a fascinating story, and one that highlights the tension between those in power and those they rule. In this regard, it could be the power or influential connection of a “Particular” community which has been trying to dominate Mangaluru City in many issues- and now wants to change a Catholic Road name. And that MCC is bowing down to them is not right- MCC which should be neutral in such decisions and should not go out of its way- thereby creating disharmony among communities. That environment is evolving all the time, but changing street names, as MCC doing in this regard is unusual. Some locals are really anal about what streets are called, others don’t care that much. Street names have substantial symbolic and historical value, and conflicts over the naming – and renaming – of streets have become a regular part of regime changes.

Sources reveal that there is a Protocol for renaming roads- Every time a road or an area is renamed, questions are raised over the procedure and logic behind the process. Names can be mooted by anyone, either the public or the MCC council. The proposal for renaming is then published in newspapers and objections are invited. On receiving objections, they are discussed in the council for approval. In the absence of a council, the administrator takes a decision. The approved resolution is moved to Urban Development Department, Government of Karnataka which renames places in the city, an official said. After this, an intimation about the same is sent to the Department of Posts. Is the protocol followed in this case?

During a press meet, the management of St Aloysius Institution had expressed its dismay and pain about the reported news that the road from Catholic Club, Hampanakatta to Ambedkar Circle would be renamed as Mulki Sundararama Shetty Road by Mangalore City Corporation as per the Government Order. It is stated that Mangalore City Corporation has taken the decision after getting the consent of several secular organizations.

In the press release, it was stated that – “St Aloysius College has no intention of creating a controversy about the services rendered by Mulky Sundararama Shetty. The college has high regards towards him. However, there have been several roads and buildings named after him in the state. One of the major landmarks in the said road is St Aloysius College. This road was earlier known as Light House Hill Road and later it was named as St Aloysius College Road on the request of the college. The name board still exists. (See photo in the report). So there is no need of changing the name of the road at this juncture.”

“The contribution of the college to the society and the nation is very unique. Apart from maintaining high academic standards, the college has been striving after value based education and training to prepare the students as responsible citizens of the nation. Needless to say that the institution is established and managed by Jesuit Fathers who are known all over the world for their selfless services in education, healthcare and social services. St Aloysius College has immensely contributed to making Dakshina Kannada an educational hub. St Aloysius College is the pride of Mangaluru. The College, having a glorious history of 137 years of its existence, has rendered outstanding service to the society. It is to be noted that the famous Fr Muller Hospital was established by Jesuits. The services of Fr.Muller Hospital have been recognized by naming the main road after it. In this context, the least we could do to appreciate the services of St Aloysius College is to retain the name of the said road as St Aloysius College Road. This is our earnest request.”

“Two illustrious Presidents of India, one Neelam Sanjeeva Reddy and the other, most popular Dr APJ Abdul Kalaam visited the college and spoke very highly of the services of Jesuits in Education, healthcare and social service. At present, there are nearly 14000 students in SAC campus. Many eminent teachers and academicians of high caliber have served in this college. The former students keep speaking very high of their great teachers whenever they come back to their Alma mater. St Aloysius College Chapel is attracting tourists from all over the Globe for its world famous rare paintings. The Chapel is a recognized tourist destination and has made Mangaloreans proud of it. We earnestly appeal to Mangalore City Corporation and Government of Karnataka to re-validate the name “St Aloysius College Road”. It will be a recognition for the yeomen services rendered by St Aloysius Institutions.” added the press release on behalf of St Aloysius institutions, represented by SAC Rector, Fr.Dionysius Vaz, Fr.Praveen Martis-Principal, SA (Degree) College; Dr A.M.Narahari, Registrar; Archibald Menezes, President, SACAA; N.G.Mohan, SACAA; Fr Pradeep Sequeira, Finance Officer; and Fr.Melwyn Pinto, Vice Principal

Speaking to Team Mangalorean, Rector Fr Dionysius Vas said, “Our focus is on communal harmony. We are looking at a ‘dialogue approach’ for the problem, and have no intention of creating a controversy. The circular inviting any objection to renaming the road as ‘Mulki Sundararama Shetty Road’ was published in a tiny column in 2015. But we did not expect it to happen. We will continue calling the stretch ‘Aloysius College Road’. The ‘Aloysius College Road’ marker was put in place 15 years ago on our request. Now all of a sudden, the process of the name being changed to Mulki Sundararama Shetty Road, is underway. We came to know about this through the media. When we asked for clarification at the MCC, we came to know about the formalities in place. Needless to say that the institution is established and managed by Jesuit Fathers who are known all over the world for their selfless services in education, healthcare and social services. Tourists flock to see the chapel here, which is one of the few attractions in the city. This is a 137-year-old Jesuit Institute, much older than Fr Muller Hospital which has a road to its name. So I hope that MCC will change its mind, and retain ‘St Aloysius College Road’ marker as it is”

In conclusion, in order to avoid future controversy in this regard, MCC should change his decision in renaming the said street. Why even bother to change “St Aloysius College Road” marker to Mulki Sundararama Shetty Road”- why can’t they find some other street/road and name it after him. Or build a new monument or a park, and name after MS Shetty. There is already a Circle in the City named as “A B Shetty Circle” after Attavara Balakrishna Shetty- the founder chairman of Vijaya Bank. For that matter, why is Vijaya Bank Head Office located in Bangalore-they should have retained it in Mangaluru, when most of its clients are Mangaloreans. They are also in the process of changing their logo.

The Jesuit priests are making a humble request without stepping into protests or any warnings, so MCC considering this should drop the idea of renaming the said street and retain the old road marker as it is. I am not blaming anyone nor I am against MS Shetty- but being an alumni of this prestigious institution and in the interest of other old students of SAC and citizens of Mangaluru, I feel however it’s not a fitting tribute to MS Shetty by changing the name of a road, which has existed and associated for years with “St. Aloysius College”. The MCC can think of a “better idea” in finding a “Better Road or a Place” to be named after MS Shetty, rather than get into all these hassles and controversy.

Light house hill road. That’s what we call it. Period.

Whats in a name ? as shakespeare says .To recoganise MS Shetty a statue can be installed and his followers can pray their respects there.SAC is a part of history of mangalore and a road named after this 137 year old institution cannot be changed

These so called Christian or Catholic corporators are traitors. They are all in scene. They should be condemned because they supported the move. All they want is vote. Let them vote in the toilet. Tired of mangy politics. Sick. Only the rich are right poor wrong. Tax evaders rich not poor. When it comes to fining also rich are right. Smart city bad people in authority. No. If you know your job do it rightfully. There is no rich middle or poor. End of the day you either will be buried or cremated as per wish. Nobody will be deepfreezed… Read more »