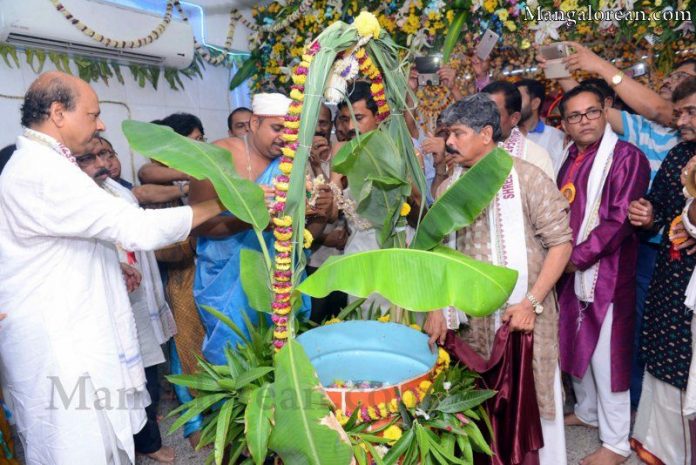 All the three days saw a continuous flow of thousands of devotees of Indian origin as well as other countries from all parts of Omanpartaking in the celebrations and seeking the blessings of Lord Ganesha. A number of dignitaries from the Indian business community, Indian Social Club and Indian Embassy also visited and offered their prayers to Lord Ganesha.

This year, the ceremonial couple, Ashok Kotian and Pushpa Ashok Kotian performed the pratishtapana and immersion Puja rituals under the able guidance of Veda Murthi Shri Shankaranarayana Adiga assisted by Shri Gurudas Pejathaya and a group of local Archakas. Devotees were seen standing in a long queue since early morning at the temple to have the darshan of the presiding deity Lord Ganesha.

After completing the Pranapratishtapanapuja by invoking the Lord’s holy presence into the beautifully crafted statue of Lord Ganesha, the idol was installed inside the mandap. Bala Ganesha wearing a glittering golden crown (Swarna Mukuta) was exquisitely adorned with a variety of flowers and ornaments. In addition, a beautifully engraved silver umbrella was hung above the idol.

The temple hall entrance was decorated traditionally with banana stems, mango leaves, a cluster of tender coconuts, bunches of dates and flowers. The alcoves on the ceilings of the entire hall were adorned beautifully in fresh flower garlands in an artistic pattern, with light and dark hued flowers alternately arranged. Around 200 kgs of fresh flowers of different varieties and colours were flown in from Bangalore and Mangalore. Fresh flower garlands of Mangalore Malige, Roses, Jasmine, Lotus, Kewra, Marigold, Zinnia, etc adorned the idol of Lord Ganesha on all the three days. A rare opportunity for the devotees to witness such a beautiful floral decoration and it was a spectacular treat to the eyes.

Jagannath Rai and his committed team left no stone unturned in taking care of all the logistics and their selfless service over all these years is highly commendable.

Right in front of the mandap, an eye catching Rangoli depicting Lord Ganesha was created by the duo ParuNegandhi and BijalVed. The Rangoli design was replete with all the symbolic representation and ornate jewellery stones, bejeweled with stone necklaces and was glittering under the colourful lights.

The Ganesh Chaturthi celebrations started with Pranapratishtapana, Panchamrita Abhisheka and Gana Homa on Friday, 25th August between 9:05 am and 11:00 am. As part of the celebrations, several other traditional rituals like Aarathi, Maha Puja, Ranga Puja, Vedic Chants, Ganapathi Sahasranamavali, Shukla Yajurveda Ghanam chanting were performed and variety of offerings like 108 Coconuts, Laddu, Kajjaya, Modaka, fruits, flowers etc., were made to the Lord on all the three days.

As part of the festivities, cultural programmes like Bhajans, Devotional Songs, Bharath Natyam, Instrumental Music were presented which were highly spectacular and were performed throughout the day by various Bhajan / Dance troupes drawn from different parts of the country. This cultural extravaganza immersed the devotees into a devotional world of joy throughout all the three days of festivities.

The finale of the three-day celebration was the ritual of immersion. Amidst the repeated and befitting choral chants of “Ganpati Bappa Moriya…Mangal Moorti Moriya” the immersion of the idol of Lord Ganesha was conducted.

Traditional Mangalorean cuisine was served as Prasad on all the three days (both in the afternoons and at night) and on the last day after immersion a sumptuous cuisine consisting of Moode, Payasa, Holige, Chitranna, Dal Tove, Kodhel, Saar, Huli/Sambar, Mosaru/Majjige (Curd/Butter Milk), Banana Podi, Pappad, Sandige were served on plantain leaves to all those who were present enhancing the flavour of the festival. It was catered by Shri RavirajBallal, Swagath Group of Hotels.

Nice report Koni Prakash Naik and thank you Nagesh for such good photographs.

Hearty congratulations to Tulu Koota, on organizing another beautiful Ganesh festival in Oman. Special thanks to Mr Koni Prakash Naik and team for a well written article and the pictures.

Thank you Mangalorean.com for your continuous support in uploading our articles and pictures. We sincerely appreciate your co-operation and we wish you all a very bright future with the blessings of God Almighty.