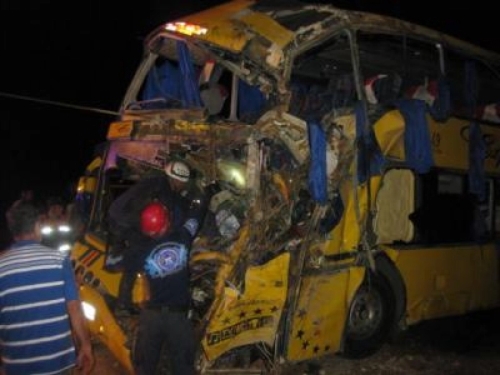 34 killed in Afghan road mine explosion

Kabul: At least 34 people were killed and 17 others wounded when a passenger bus hit a mine placed on a national highway in Afghanistan’s Farah province on Wednesday, officials said.

The explosion occurred around 6 a.m. when the bus packed with passengers detonated the mine on the road linking the provinces of Herat and Kandahar, Farah police spokesperson Muhibullah Muhib told Efe news.

“All victims of this incident are civilians including women and children,” he said.

Victims of the blast were taken to neighbouring Herat province, while the wounded were evacuated to nearby police bases where they were given first aid.

The number of civilian casualties in nearly two decades of the Afghan conflict remains extremely high, with 1,366 dead and 2,446 wounded in the first half of 2019 alone, the United Nations Assistance Mission in Afghanistan (UNAMA) said on Tuesday in its latest report.

According to UNAMA, the “zero victims” goal agreed in July in Doha during talks among the representatives of the US, Afghanistan and the Taliban, is still far from being achieved.

In 2019, 717 deaths occurred due to the actions of Afghan and international forces and 531 due to insurgent groups such as the Taliban and the Islamic State, marking an unprecedented situation since the data began to be collected in 2009.

After nearly two decades of conflict, Afghanistan is at a stage of some optimism in light of progress made in negotiations between US representatives and the Taliban, who insist on the need for the US to withdraw its troops from the country for the peace dialogue to enter a new phase.