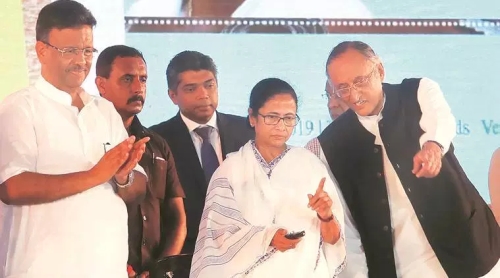 Kolkata: Banerjee said her government has taken a number of steps to protect the environment from the possible pollution at the leather hub and thus decided to set up eight effluent treatment plants.

Chief Minister Mamata Banerjee on Thursday inaugurated several new initiatives at the Calcutta Leather Complex (CLC) at Bantala and said investments worth Rs 80,000 crore will be poured into it to generate 5 lakh employment opportunities.

“This is not only the biggest leather hub in Asia, but in the world. Ninety-eight per cent of the world’s leather gloves are made here. Once complete, this hub will generate 5 lakh jobs. I am naming this hub ‘Karma Diganta’. At the Bengal Global Business Summit, we had said two lakh jobs will be created. In reality, 5 lakh jobs will be created with the investment of Rs 80,000 crore,” she said at the event.

Banerjee formally allotted 70 acres for 187 new tanneries from Kolkata, Kanpur and Chennai, taking the total number of tanneries at CLC to more than 790. Out of the 187 tannery companies being allotted plots, 28 belong to the big category, 97 are medium and 62 are small. Among these, 29 are from Kanpur, two from Chennai and 156 from Kolkata.

“At a time when employment opportunities are ebbing across India, we have been able to generate jobs. Since 2016-17, two crore jobs have been lost in the country. We have been able to reduce unemployment by 40 per cent. After demonetisation, the investors of Kanpur contacted us. We have given them land at a concessional rate. Besides, one lakh jobs will be created at Deocha Pachami,” she said.

Banerjee said her government would also help tanners from the city willing to invest in the CLC to get lands.

“It’s not my land. The land was given by the earlier government to someone else. We will provide special incentives to tanners to get land. There must not be any differences,” she said.

Banerjee said her government has taken a number of steps to protect the environment from the possible pollution at the leather hub and thus decided to set up eight effluent treatment plants.

“We have taken some actions here. When the leather industry in Kanpur is shutting down (because of state PCB orders). We are building eight effluent treatment plants. And out of the eight, four are being constructed. Two will be completed by November and other two will be ready within a short time,” she said.

The Chief Minister opined of shifting of the IT industries located at CLC to some other place.

“Slowly and slowly we will shift the IT industry from here to some other place. This place will open up a new horizon here in the world of the leather industry. It’ll be a unique hub,” she said.