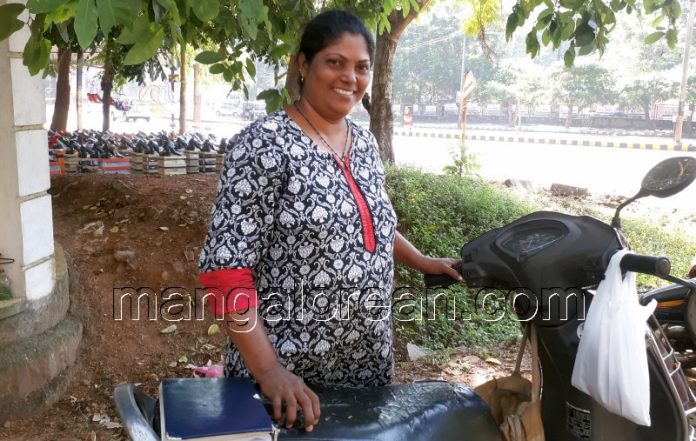 A Guide to Riders

One fine day I decided to learn to ride my motorbike. A friend suggested going to Suguna’s class. To my pleasant surprise, I found an open-air classroom under a big tree. You know a riding class happens here only because of a few motorcycles parked under the tree. No advertising, no signs nor hoardings. Suguna functions purely on word of mouth. As I started my bike riding lessons, I was fascinated by her story.

Suguna is a very busy lady. She holds classes from 8 to 12 in the morning and 4 to 7 in the evenings. In the afternoons she helps out a friend with chores in a restaurant. Her day begins with preparing her daughter for school. After work, she cooks for her family while listening to her daughter play music on a keyboard and watching her husband tend to their small garden and attending to their poultry. Her husband drives a rickshaw for a living during the day. Every night the family says their prayers before going to bed.

In early 2000 the company TVS used to give lessons to people who purchased a motorcycle. Though Suguna worked as a receptionist at TVS, she watched how the other instructors taught riding. This improved her own teaching and today she is a well known and popular bike riding instructor of Mangaluru. Many driving schools send their students to Suguna for lessons.

Suguna is also an athlete and has been a state level champion of weightlifting. She frequently took a bus to work because she would run short of money after a few days of receiving her salary. Suguna met her future husband on the bus she took to work. Her husband is very supportive and is proud of the work she does.

One of the challenges Suguna faces is lack of space. Until recently she could give lessons in a public park. But she can do that no more. Hence she has to teach in a back street. She hopes the city will someday make space for women to learn to ride in safe spaces. She wants women to live independent and free. She also hopes to lead a life that will inspire others. “Give light, and the darkness will disappear of itself, “said Desiderius Erasmus. Suguna did teach me to ride and bestowed her kind light on me. Here is wishing Suguna success in all her future endeavours.