On September 20, we started our journey from the Orient Hotel at 7:30 am after breakfast. First, we visited the store where holy articles such as the rosary and crosses made from pure olive wood were available. We proceeded towards the Chapel of the Milk Grotto, where the priests from the group concelebrated the mass. The Chapel of the Milk Grotto is also called as Grotto of Our Lady. It is a Catholic Chapel situated in Bethlehem. Since the Byzantine times, Catholics have been visiting this place as pilgrims. The present chapel was built in the year 1872 with a mosaic floor, the mosaic being used from the former Byzantine Church which was built in the 5th century. It is said that when Joseph and Mary had fled to Egypt from Herod’s soldiers, they took shelter in this cave and while Mary was feeding baby Jesus, a drop of the Virgin Mary’s milk fell on the stone which turned it white. It is believed that by consuming the powder of that rock infertile couples gets healed. Many infertile couples have conceived after visiting the Milk Grotto and consuming the powder. The powder is available only at the St Catherine’s Franciscan Monastery. 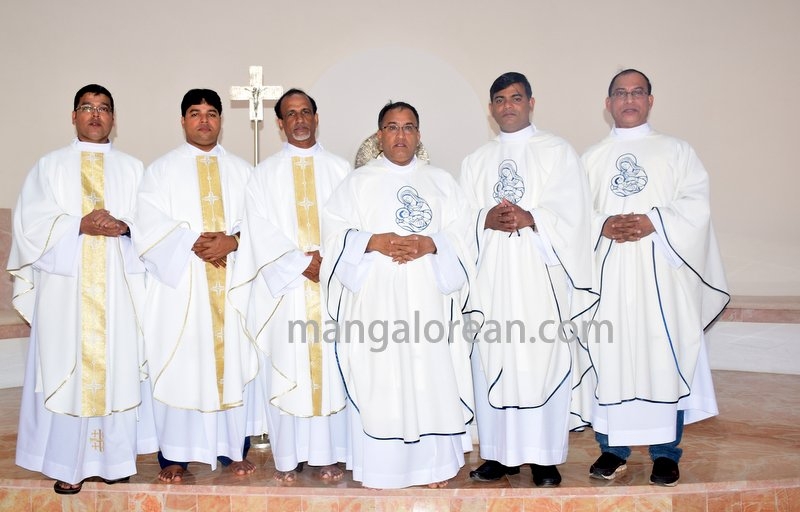 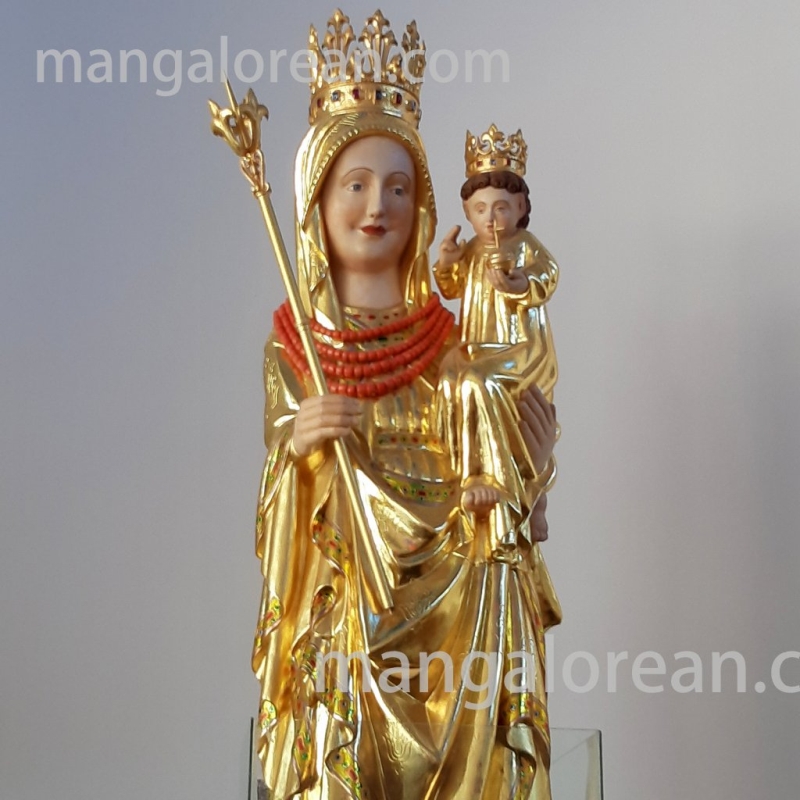 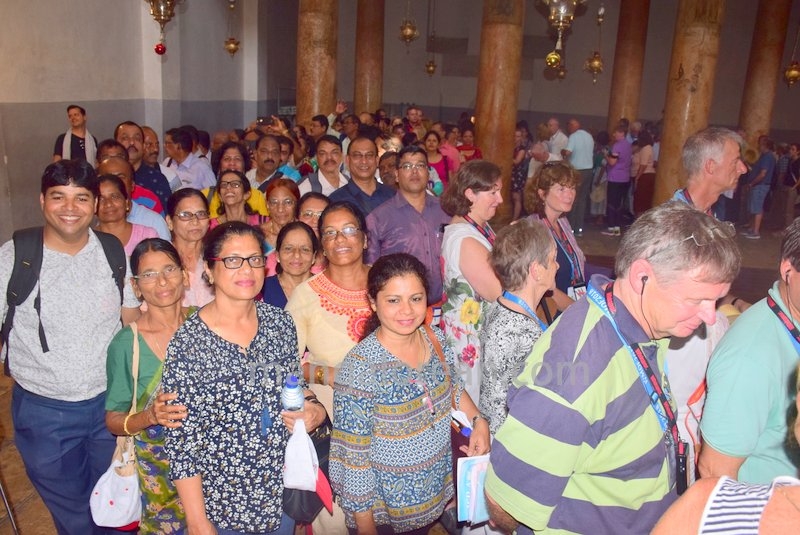 After visiting the Grotto, we proceeded towards the Church of the Nativity in Bethlehem, which was commissioned by Constantine the Great on the site believed to be the birthplace of Jesus. The church has seen numerous repairs and additions since its existence. It is a very religious place for Christians because it is the birthplace of Jesus. A silver star has been fixed marking the spot where Jesus was born. We waited for nearly two to three hours in the queue to enter the Cave (birthplace of Jesus). The wait was worth it since we got an opportunity to see the birthplace of Jesus, which very few people get. After standing for two to three hours, we entered the grotto (cave). The cave is pointed out where Jesus was born and the manger in the cave where each one of us got the opportunity to touch the place where Mother Mary gave birth to Jesus. We also visited the manger and captured the special moments. 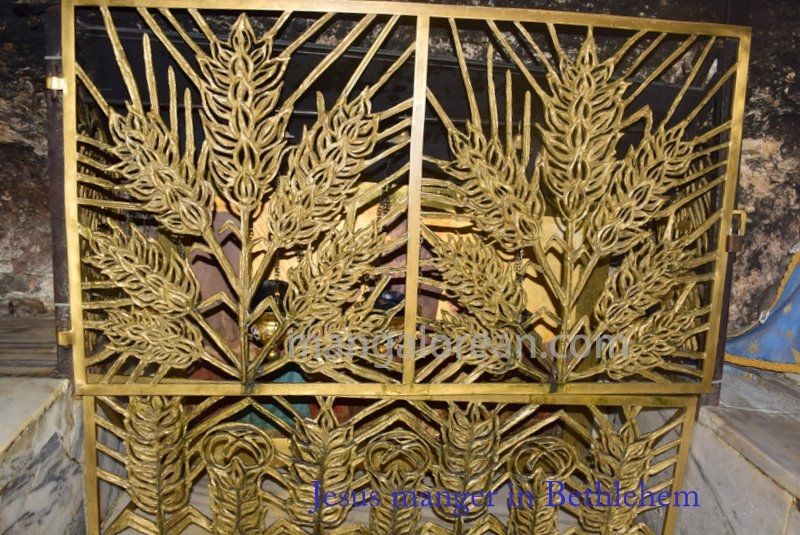 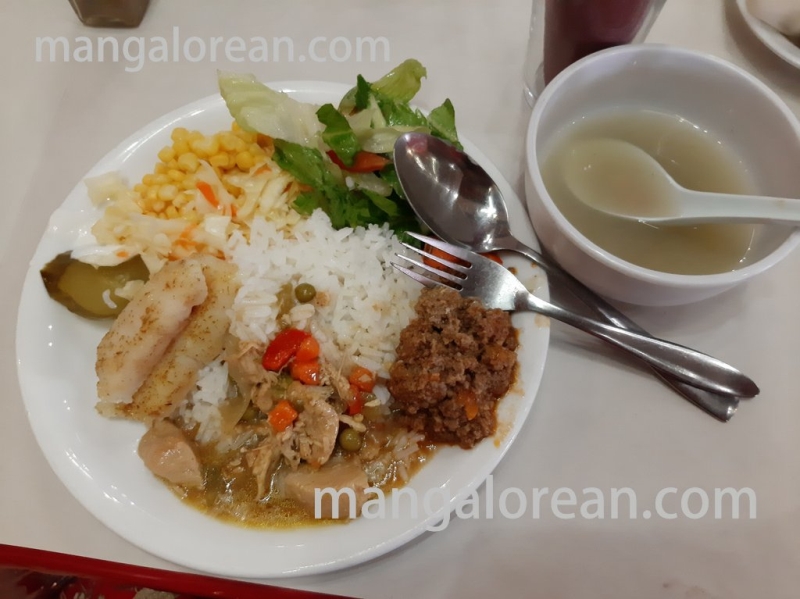 After visiting the Church of the Nativity, we proceeded for lunch and towards the Shepherds’ Field after. The Shepherds’ Field is the site of the Annunciation to the shepherds and also the place where Ruth gleaned grain for herself and her mother-in-law Naomi. The Chapel of the Shepherds’ Field is a religious building of the Catholic church in Beit Sahu, southeast of Bethlehem. The chapel marks the place where, according to Christian tradition, shepherds were making fire at the entrance of the cave as a sign for wild animals not to come close. While the shepherds were watching their sheep, angels appeared to them and announced the birth of Jesus. The Shephards sang “Glory to God in the highest, and on earth peace to people of goodwill”. 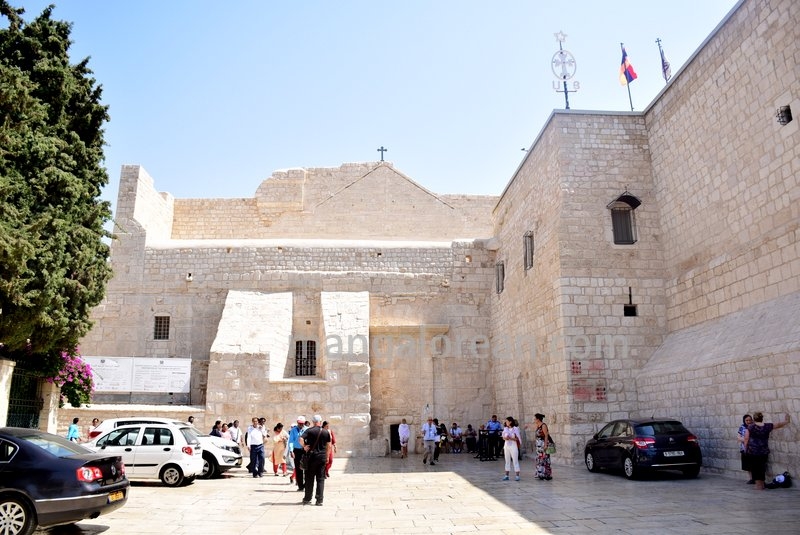 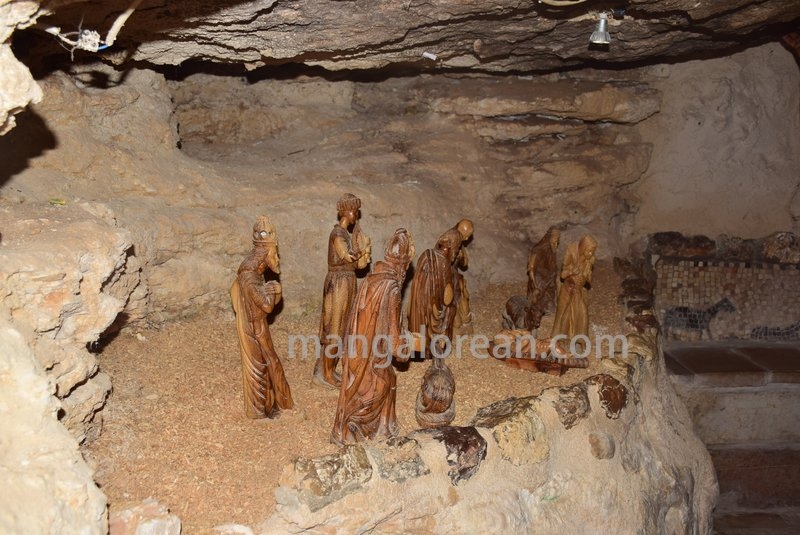 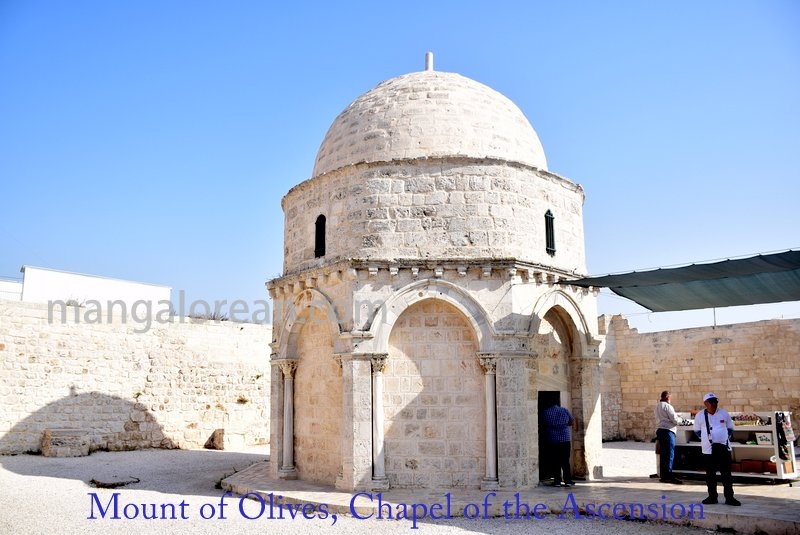 From there, we proceeded to the Mount of Olives in Jerusalem for a panoramic view. Our guide, Freddy briefed us about the significance of Mount of Olives and said, “There are eight gates to Jerusalem – Jaffa Gate, Zion Gate, Dung Gate, Golden Gate, Stephen’s Gate, Herod’s Gate, Damascus Gate and the New Gate. The Church of the Holy Ascension was taken by Salah ad-Din in 1187 and converted into a mosque and remains as such today. It contains what is traditionally the last footprint of Jesus on earth before he ascended into heaven. Scripture indicates that Jesus ascended into heaven in the vicinity of Bethany. The Mount of Olives is frequently mentioned in the New Testament as part of the route from Jerusalem to Bethany and the place where Jesus stood when he wept over Jerusalem. Jesus spent time on the mount prophesying and teaching his disciples. There is a Church of the Ascension which has no pillars nor the cross. This is one of the sites of the Christian Chapel. We read in the Book of Acts that Jesus went with the disciples to the mount called Olivet. It was a Sabbath day Journey from Jerusalem and from there, he ascended into heaven. According to the prophet Zechariah, Jesus will return not only in the same way but to the same place. In a prophecy related to the end times, Zechariah declares, “On that day, his feet will stand on the Mount of Olives, east of Jerusalem, and the Mount of Olives will be split in two from east to west, forming a great valley, with half of the mountain moving north and half moving south” (Zechariah 14:4). 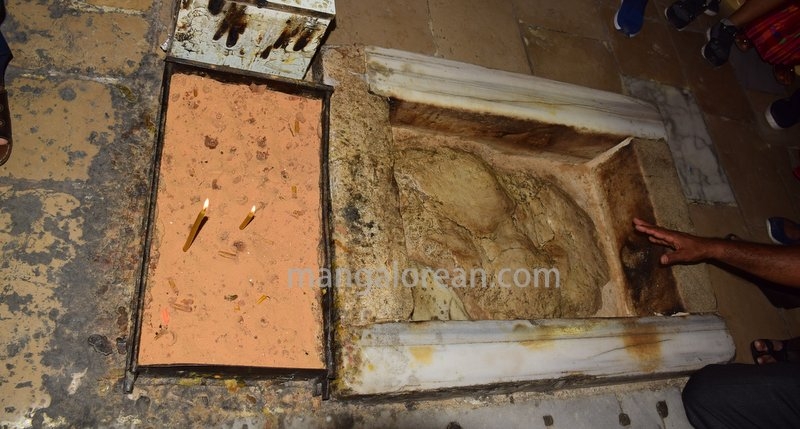 The very location where David wept in defeat and where Jesus was betrayed and rejected, will be the place where Jesus returns in triumph over all His enemies. Briefing about the olive trees, Freddy continued, “Once upon a time, the whole mountain was covered with olive trees but in 1917, there was a disaster. The Turkish cut all the olive trees on the mountain for coal to run the trains.” We also visited the Chapel of Ascension, the church where Jesus said the prayer ‘Our Father’. The Chapel of Ascension is also known as the Mosque of the Ascension, built over the site where Jesus ascended into heaven after 40 days of his resurrection. According to the local tradition, when he ascended to heaven, he left his footprints on the rock. 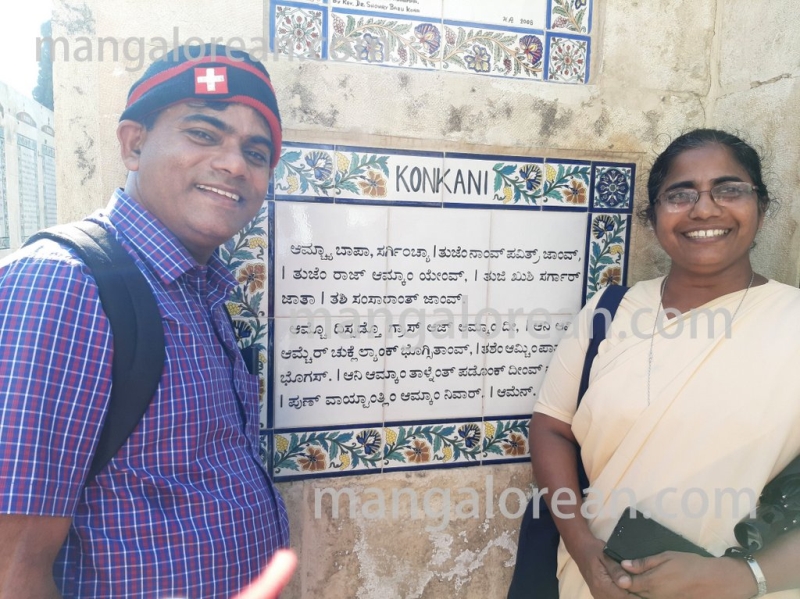 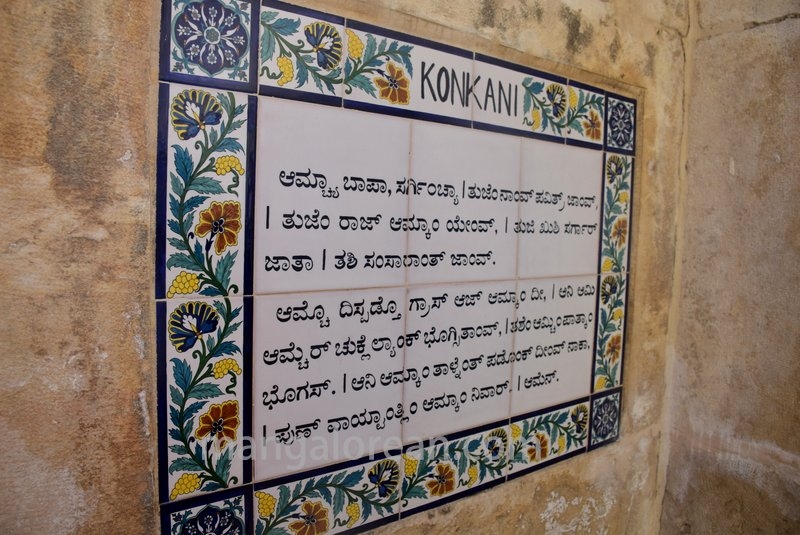 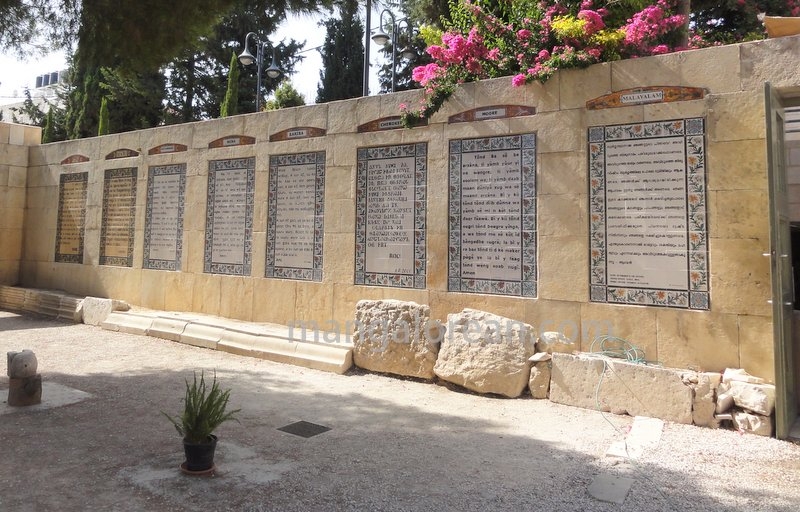 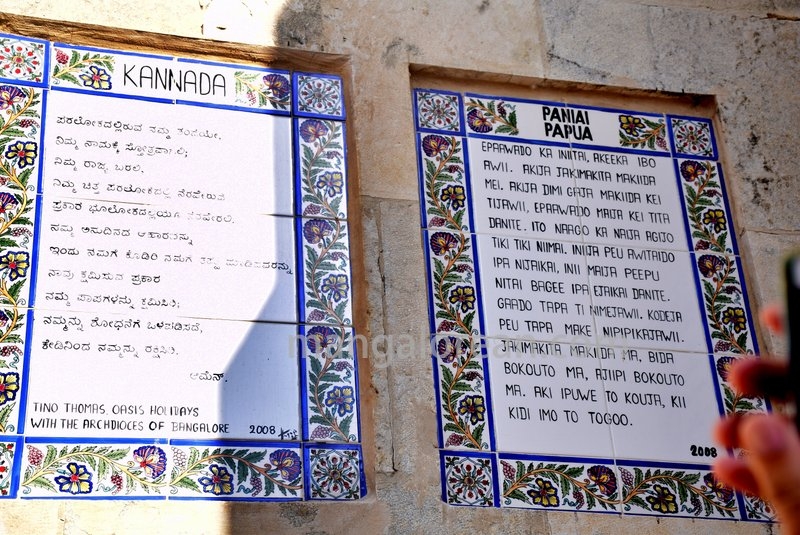 We then proceeded towards the Church of Pater Noster, which is also a Roman Catholic church. The Pater Noster Church is located on the Mount of Olives in Jerusalem. It is a Carmelite monastery and is also known as the Sanctuary of the Eleona. Paternoster means our father in Latin. Jesus taught his disciples the Lord’s Prayer and asked them to pray. It was then that St John asked Jesus, “What do we pray?” and Jesus replied to him to pray to “Our Father”. Jesus prayed “Our Father” in Aramaic. The first church (Cave) was built in the 4th century and destroyed in the 7th century. The present church was built in 1875 by Princess Eleona, who was the founder of Carmelite Nuns in Jerusalem. She died in France but she was buried in Jerusalem. The Lord’s Prayer is written on the walls of the building in more than 100 different languages including Konkani and Kannada. 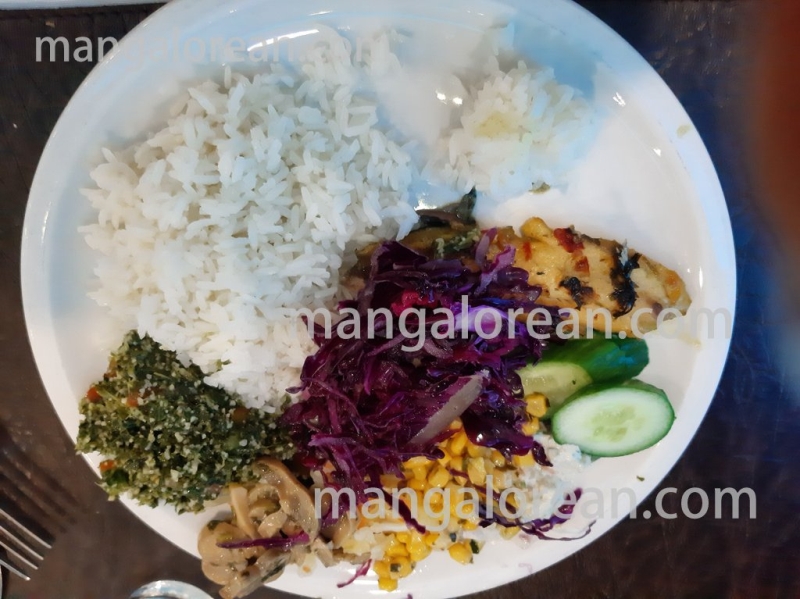 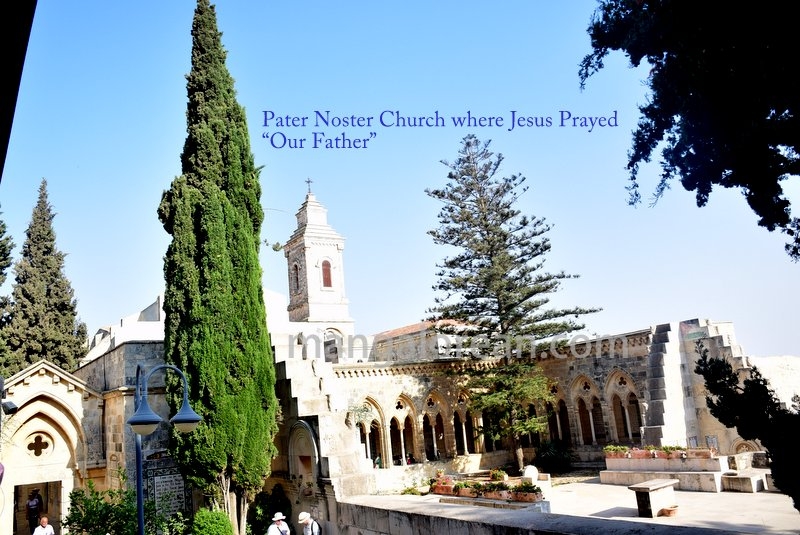 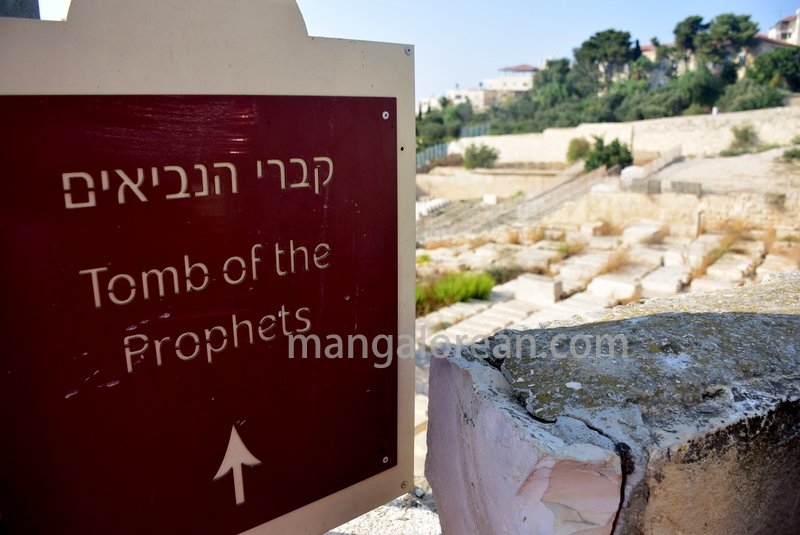 We also walked to the Kidron Valley. Tour guide Freddy said, “The Kidron Valley which is the valley on the eastern side of the Old City of Jerusalem separating the Temple Mount from the Mount of Olives, continues east through the Judean desert in the West Bank, towards the Dead Sea, descending 1,200 m along its 32 km course. From here, we walked down to Gethesmane. We walked for nearly two hours and experienced the way where Jesus walked 2000 years ago. The upper Kidron Valley holds Jerusalem’s most important cemetery from the First Temple period, the Silwan necropolis, assumed to have been used by the highest-ranking officials residing in the city, with rock-cut tombs dating between the 9th and 7th century BCE. The upper Kidron Valley segment north of the Old City was one of the main burial grounds of Jerusalem in the Second Temple period, where 70,000 to 1,50,000 tombs have survived to this day, while the segment east of, and opposite the Temple Mount, boasts several excellently preserved monumental tombs from the same period.” 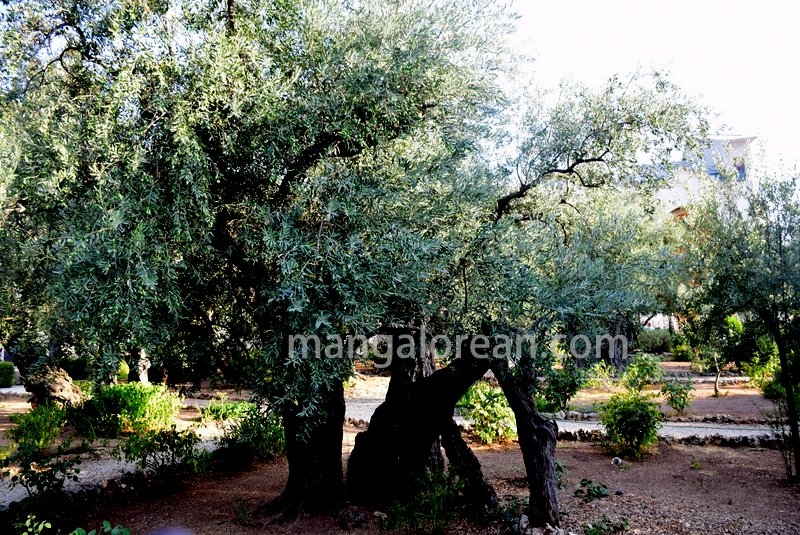 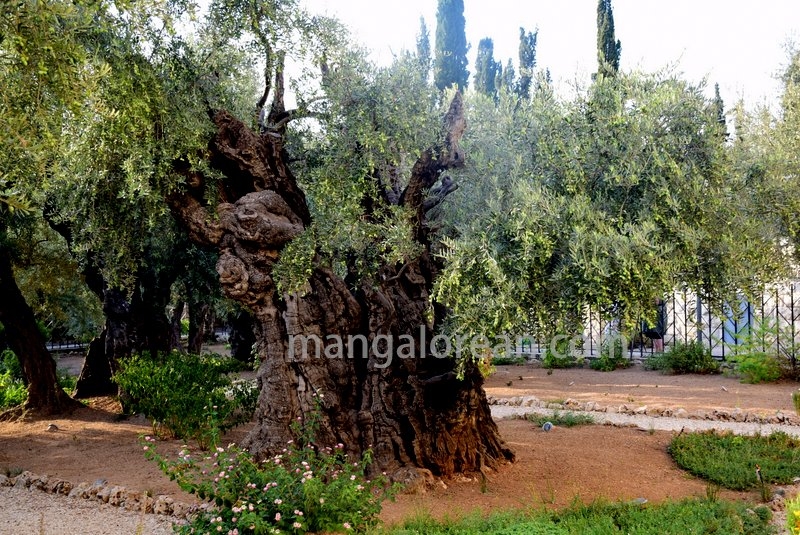 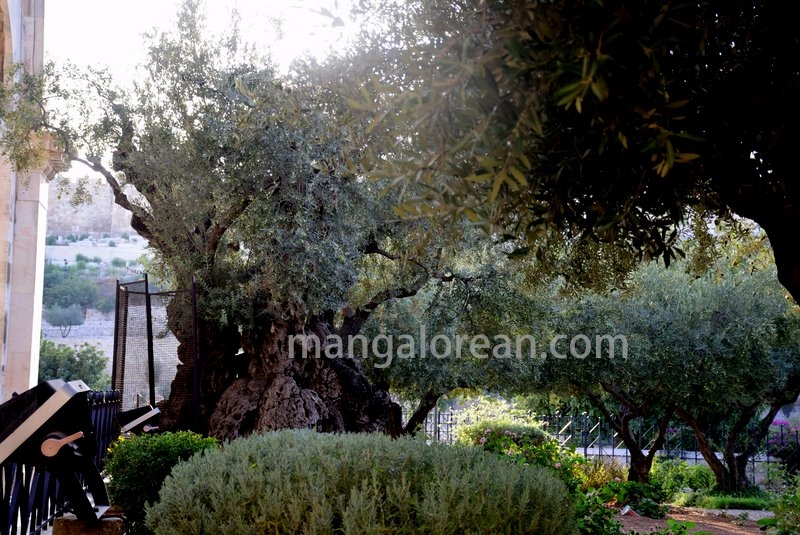 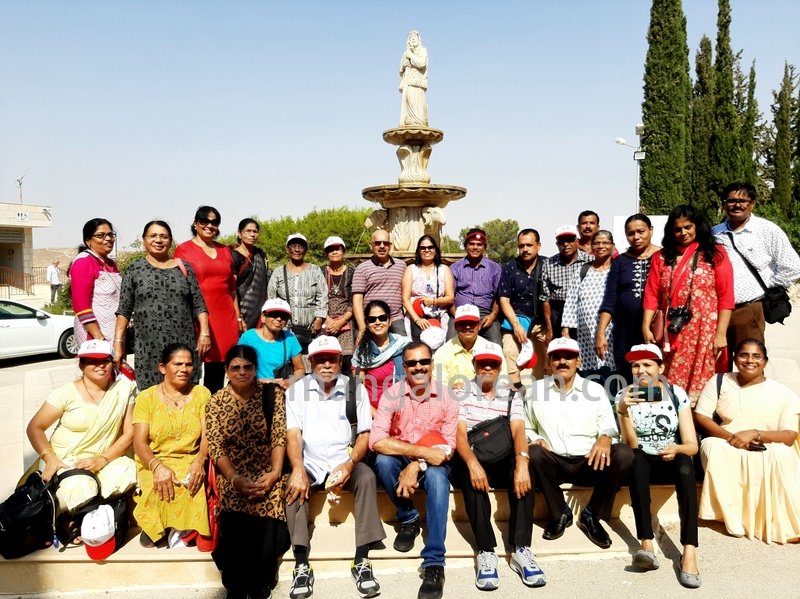 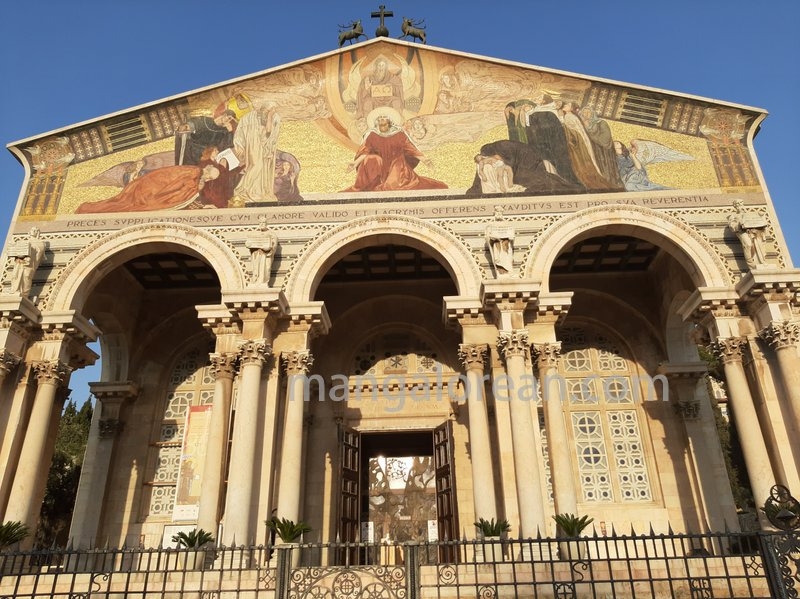 Later, we proceeded towards the garden of Gethsemane, near the foot of the Mount of Olives, where Jesus was arrested and where he prayed his last prayer. Freddy briefed about the Olive Trees and said that the garden of Gethsemane is nearly 1200 square metres where there are 8 ancient olive trees that are nearly 2000 to 3000 years old and still bearing fruit. This is a place where Jesus went with his three disciples Peter, John and James. He had left them at someplace, under one of the trees and had gone to a huge rock which is now inside the church. On that rock, Jesus suffered and with agony prayed his last prayer before he was betrayed. It was the last prayer Jesus prayed before he was crucified. It was then that Judas had come along with the Roman Soldiers and betrayed Jesus with a kiss. The exact place where Judas had betrayed Jesus is not known, but there is no doubt those olive trees in Gethsemane are a witness to Judas’ betrayal.” 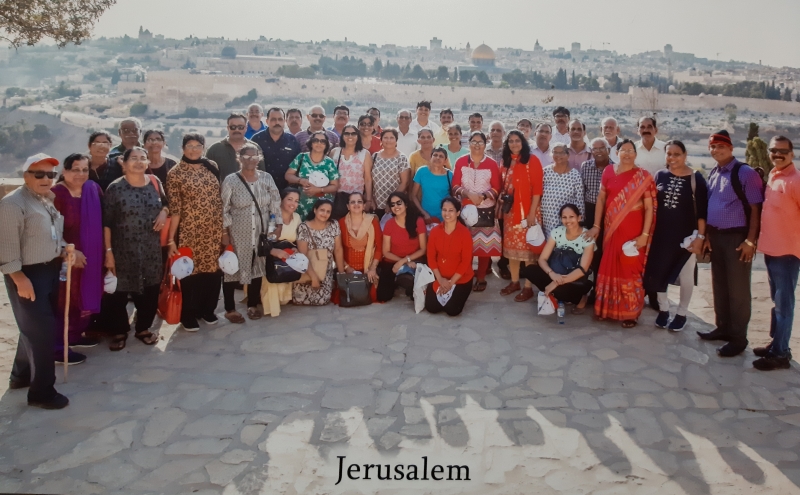 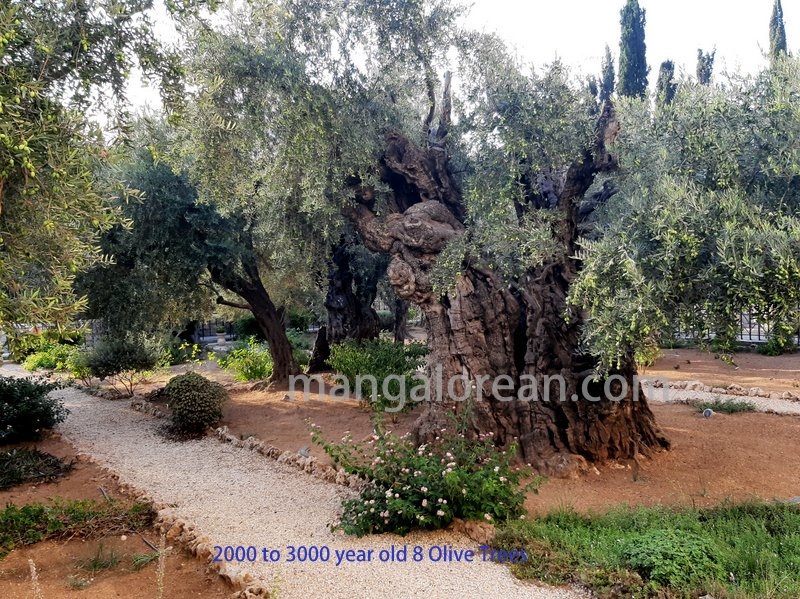 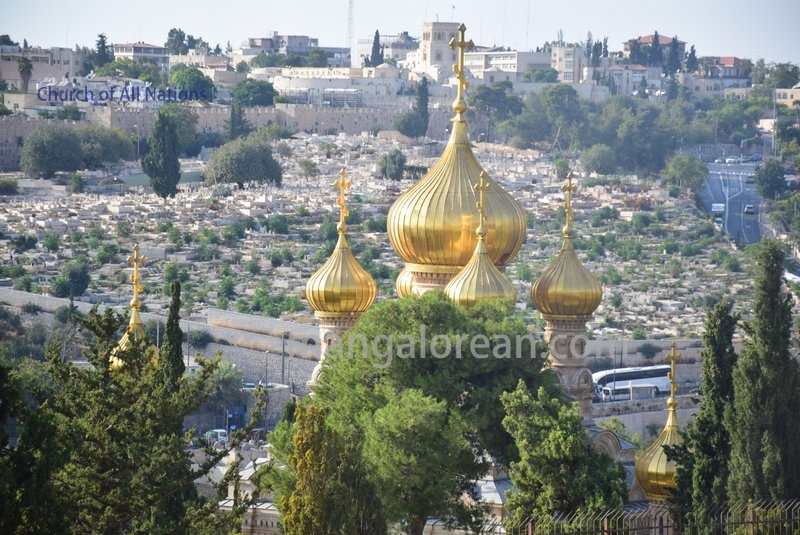 This  Church has three names such as Church of  Gethsemani because it is built-in Gethesmani,  the church of Agony because it is built over the rock of Agony and the Church of All nations because 12 nations gave donations to the Franciscan fathers to build this church.  Franciscan fathers built the church with 12 domes and every dome belongs to one nation such as United States, Germany, Canada,  Belgium,  Britan,   Italy,  Spain, France,  Mexico  Chile, Brazil and Argentina.

Later we proceeded towards the hotel for overnight stay.

A Memorable Journey of a Lifetime- the ‘HOLY LAND EXPERIENCE 2019’