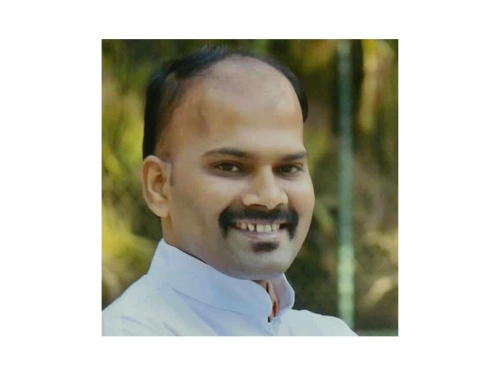 ‘Amalan, Why Were You in a Hurry’?

“Amalan, was a man in a hurry!” said our Provincial Fr Francis Parmar in his moving farewell tribute to you, at the introduction of the Eucharistic Celebration at Rosary Cathedral yesterday (28 June). Fr Francis went on to cite several examples as a justification of his statement: your whole-heartedness to go to Cambodia and master the Khmer language; your tremendous desire to complete your theology studies and be ordained a priest; your eagerness to be completely well, yet your unflinching acceptance of God’s will in your life….all this and much more, which beautifully summed up a brief but well-lived life!

Yet Amalan, the one question which has kept nagging me (and I am sure many many others) ever since your untimely departure in the early hours of 27 June, is “Amalan, why were you in a hurry”? It’s more than 48 hours now since you said ‘goodbye’ to us. For the many loved ones whom you have left behind the only words in one’s heart and on one’s lips were, “he was so young: just thirty- five years old; he was so promising- and the Lord snatched him away!”

It is indeed difficult for us mortals to fully understand and accept the ways of the Lord. But in the words of those who spoke at your funeral: you understood and accepted cheerfully and willingly what the Lord had in store for you! “Amalan, why were you in a hurry?” because we know that you prayed “if it is thy will Lord take this chalice from me”, you were strong and determined in that great struggle to get well again; but then you were always unequivocal and resolute in saying, “not my will Lord, but Thine!”

There is so much you wanted to do in life: as a pre-novice you made your own special efforts to respond to the Gujarat Carnage; in Chennai, when Rupa Mody came to Loyola College to speak at a programme – who spent value time with her; comforting and consoling her on the ‘loss’ of her only son. You were concerned at the injustices everywhere and you always wanted to do your bit to make our world a more humane and compassionate place. You had your dreams; there is so much you had to offer our world. So, “Amalan, why were you in a hurry”?

You spent two precious years in Cambodia: giving your very best to the people there. Just before I left for the Middle-East in a long chat you shared with me your experiences there and how you long to go back there to serve the people- particularly those who were affected by war and violence. I don’t think you ever gave up that desire. There is so much you wanted to do for others. Today they all join me in saying, “Amalan, why were you in a hurry”?

Yes, “Amalan, why were you in a hurry”? As one watched your beloved mother on the day of your funeral, no words sufficed that would actually console her. She gazed lovingly at your lifeless body – surely wondering why you had to go home so soon. She was there by your side these past many weeks –caring and tending for you just as most mothers would do; your untimely death is a void in her life which will never be filled. But she is also a woman of deep faith. When your Uncle Fr David Roy queried her in his sermon yesterday: her reply was a total “yes” to the will of God!

It was fitting that we said the final “goodbye” to you on the Feast of the Sacred Heart of Jesus. Certainly an appropriate day, for during this brief journey on earth, you always radiated love and compassion –even when you were in the height of your suffering. You reached out to the poor and excluded, to the hopeless and the lonely. You always found time for others( as was so emphatically mentioned by all during your funeral service). There is so much you taught us; there is so much more you needed to teach us. So, “Amalan, why were you in a hurry”?

Unlike many others, who knew you more intimately, I do not claim any privileged relationship with you! But all along I was just hoping and praying that you would be victorious in your desire to live! Like all of them (particularly your close relatives, companions and friends) it is not easy to accept that you are no longer in our midst. But tonight as I write, fully accepting and trusting in God’s design for you and for each one of us, I cannot help but say in my human frailty, “Amalan, why were you in a hurry”?

You are in a better place now! Surely enjoying the reward you so richly deserved! Intercede for us dear Amalan! I for one will continue to say to you “Amalan, why were you in a hurry”?

{A personal tribute to FR. AMALAN THAINASE SJ (Gujarat Province) who died of cancer on 27 June 2019 in Baroda. He was 35 years old and 12 years in the Society of Jesus; he was ordained priest in December 2017}.