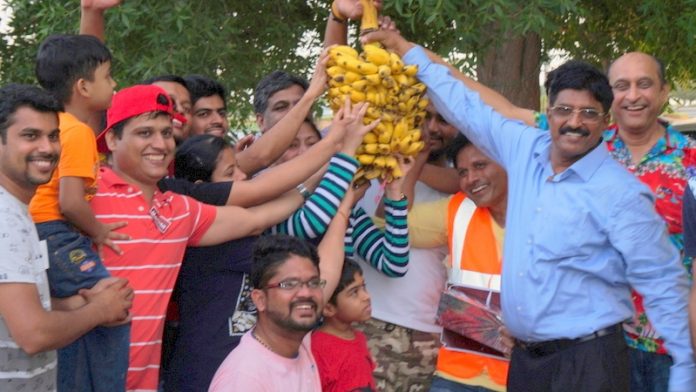 UAE: The Konkani Community of St. Paul’s Catholic Church Mussafah, Abu Dhabi conducted their Third Annual Family Picnic Day on Friday 16th of November 2018 at Yas Island Park with a great fervor. After the Friday morning Holy Mass, all people numbering approximately over 250 gathered near the picnic site. The Picnic started as per scheduled time by 9:30 a.m. with prayer led by Br. Suresh Saldanha and Rev. Fr. Wilson Rumao, Spiritual Director of Konkani Community blessed the congregation. John D’Lima, Main Coordinator of the community welcomed the gathering and appreciated their support for all the events and requested them to continue the same for the future events as well.

Immediately after the opening prayer, traditional breakfast was served to all. Games coordinator Mr. Lawrence D’Souza formed 12 groups and warm up balloon game was played by all participants. Later several other exciting games, such as Passing the plate which was very tricky, Balloon pick up, sack race, forming the number, run with cup & straw, eating the fruits, paper decoration, Crosswords, breaking the earthen pot, plywood walker, water balloon etc., were held. But the highlights of the games were” tug of war “and “breaking the earthen pot” which was tied at a height of 9 ft. to a tree. People enjoyed each and every bit of all the games and appreciated the efforts of the organizers. In addition to this lots of games were conducted for children of different age groups. There was an exclusive game for volunteer which was really an eye catching moment.

The special guest of this Picnic was the presence of Rev. Fr. Ani Xavier, Parish Priest of St. Paul’s Church, Musaffah who has given all praise to the Konkani Community and Picnic organizers for their efforts and blessed the food and appreciated the their activities not only for the community but for the whole parish in general. Traditional lunch was served around 1:30 pm.

Immediately after the food, “cross word” game was played and a good number of gifts were distributed to the winners. The highlight of the prizes was banana bunch (kelaincho godai) which was won by Maroon team as first prize. A member of the Yas Island Park Management Mr. Ali was felicitated for his cooperation as he was a great help to the organizers in providing the permission for picnic as well as assisting in providing generator.

Immediately after the lunch, games were once again resumed first with the cross words and followed by other games. The highlight of the evening session was the kabaddi match played between the groups. At the end of the session, Paper decoration game was conducted and within a period of 10 minutes different groups came up with novel ideas, picturizing Mother Teresa, different political leaders, Santa Clause, Mother Mary etc. People explicated their real inner talent while expressing such ideas. A Baila dance was performed as the final program of the day. All groups who cooperated throughout the day and the winning teams were given special prizes. In between around 3.30pm tea-coffee with snacks was served to all participants which was enjoyed and refreshed all participants. There was a special lucky prize winner as against the ticket and the Lucky winners were given the prizes.

John D’Lima thanked all the people, sponsors and volunteers for their support. The picnic was concluded with reciting Laudate Dominum praising and thanking Lord for this wonderful day. Picnic came to an end approximately at 5:30 pm and it was a fun filled memorable day enjoyed by all.