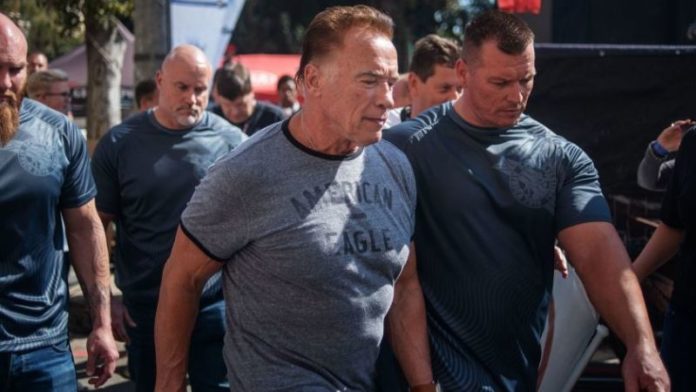 “I just admired him. I loved what he did on ‘Deadpool’. I had a meeting with him and (at the time) he was going to do a second ‘Deadpool’. I said, ‘I want to be directed by you’. And he ended up dropping out of ‘Deadpool 2’ and he moved over to the ‘Terminator’ and I was really happy about that. We had a really good rapport,” Schwarzenegger said.

“He was always very encouraging and very much into communicating with the actors. He’s a guy who really sees the whole thing as a team effort — and that’s what a movie like this needs. He was like that with everybody on set. He works with everyone together, it’s very collaborative. And it works,” he added.

Schwarzenegger loves what Miller brings to the world of “Terminator”.

“What he has done with this movie is great. It’s at 110 percent in terms of energy. The way he pitched it to me was great, too. He was like, ‘We’re going to bring Linda back, and she’s going to be a /big/ part of the story’. I was excited about all of those things and I was delighted with how they all played out on set. I thought he was fantastic,” added the actor.

Produced by James Cameron, the film brings back Schwarzenegger as The Terminator and Linda Hamilton, as an older Sarah Connor. Her son John will once again be played by Edward Furlong.

Schwarzenegger and Hamilton starred together in the franchise 28 years ago with 1991 film “Terminator 2: Judgement Day”.

Although “Terminator: Dark Fate” is the sixth instalment in the franchise, it is being touted as a direct sequel to 1991’s “Terminator 2: Judgement Day”. The film ignores the events of the three films that have come since.

What can you tell us about your role in this?

“I don’t want to tell you because it will spoil the movie, but I can tell you that I am still the T-800, but I have become more humanised than in any of the other ones,” Schwarzenegger said.