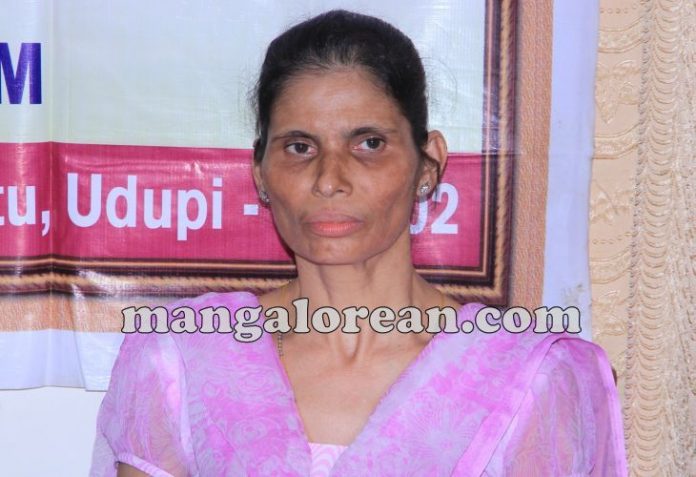 ‘I was beaten black and blue, left to starve’ Jacintha returns from Saudi Arabia

Udupi: “I was beaten black and blue and left to starve,” said Jacintha recalling the horror at her employer’s house in Saudi Arabia. Jacintha from Mudarangadi, who was entrapped in a human trafficking web of Mumbai and sent as a slave to Yanbu has now returned after 14 months of slavery. Jacintha recalled her agony and suffering in Saudi Arabia at the AV Baliga Memorial Hospital, here on September 23.

I used to wake up at 6:00 am and work till late 2:00 am. The employers used to kick and wake me up in the morning. My employer has three wives and their families; I was even tortured by his 5-year-old child. The agony and pain suffered in his house haunts me now. I was not given food, I survived by eating the leftover food from their plates.

One fine day, I managed to escape, but was detained by the Saudi cops and sent back to the employer’s house. The employers angry by my attempt to escape from the house thrashed me very badly, I was wounded but none in the family came to my help.

The employers had bought me for 25000 SAR. I was denied the pay but later after several requests, 1000 SAR was remitted to my children. When I pleaded to relive me from my duties and send me back to India my request was turned down by the employers, they said that I was bought as a slave for 5,00,000 SAR.

Dr Ravindranath Shanbaug the Chairman of Human Rights Protection Forum said that the Mangalore police have booked a case to nab the agency which duped Jacintha in an incompetent manner. James an agent who was arrested may have given possible leads to the police but the accused Agent Shahbaz Khan is not yet arrested by the police. The Ministry of External Affairs has directed the Maharashtra police to investigate the matter but the police of Maharashtra have failed to initiate an appropriate action.

Dr Shanbaug said that due to the effective efforts by the HRPF team and also Roshan Rodrigues and the Ministry of External Affairs Jacintha could return home. A sum of rupees 4,50,000 has been paid to Jacintha’s employer.

Dr Shanbaug said that the medical report of Jacintha from the Baliga Hospital is awaited, as she has been subjected to cruel violence. He also said that she had fainted in the aircraft during her travel back to India due to weakness. Jacintha returned to India on September 22, he added.

Jacintha was flown to Saudi on a Visit Visa and her continued stay in the Kingdom of Saudi Arabia would amount to further legal complications. The penalty for the overstay in the Kingdom was paid to the authorities who later issued her an exit visa due to the timely presence of Roshan Rodrigues, he added.

Jacintha says that it was her ultimate dream to see her children, her children were weeping in the airport. She also said that offenders who are involved in the trafficking the women by duping them after promising of a good job should be detained and prosecuted.

“they said that I was bought as a slave …” report quoting this innocent woman who experienced real hell in a Islamic Kingdom of Saudi. Look at this poor woman – My heart goes out for her. We all have failed her. This is really really sad. Where are the cowards in media? Why are you not asking the hard-hitting questions on the nexus between slavery, religious beliefs and lack of human rights? In fact, if anyone brings this up, the same spineless media and pseudo-secular groups will label you as ‘moral police’ or ‘hindutva’ element. My heart goes out… Read more »

Salute to Sri Ravindra Shanubogh and others who helped to rescue the lady in distress.
It is unfortunate that the concerned Govt. departments are not serious to prevent such situations.

These fraud agents and agencies should be closed and those doing the fraud ahould be sent to jail.

There are many Jacitha’s all over the ME, this is only the small tip of the iceberg. The Indian government should investigate all concerned and there should be levied hefty fines and the monies part or full should be given to Jacintha for the pain and suffering. Special thanks to Mr. Roshan Rodrigues, Dr. Ravindranath Shanbuag and all those who helped. The case should not die a natural death and this matter needs to fully investigated and all found in default should be punished in particular her agents in India, the employer in Saudi Arabia and even the local Saudi… Read more »

Tears in my eyes.. I could feel the pain. If I meet them will kick their ass, cruel ppl..