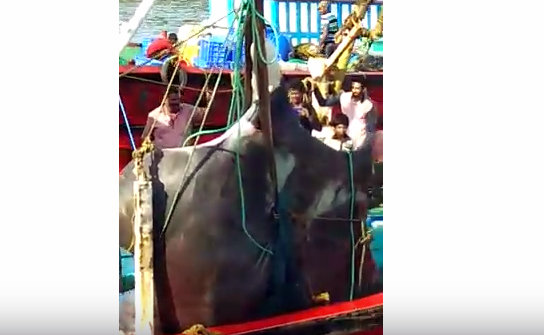 Malpe: A huge Stingray locally known as Torake was caught in the net at Malpe Harbour here on May 11. The fish weighed 1000 KG.

According to the fishermen a deep sea boat Vighna Raj owned by Mithun Kunder of Kola, Malpe had gone for deep sea fishing 10 days back. During fishing, a Stingray was trapped in the net at a depth of 100 meters in the sea.

The huge fish was brought to the shore on Saturday, May 11 using a crane. The fish was later sold for Rs 60000 to a fish dealer in Mangaluru.