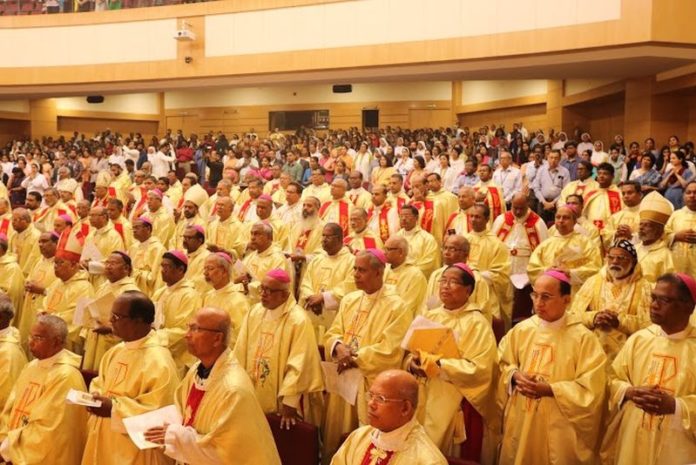 Bishops: ‘Dialogue Can Overcome Skepticism, Doubt and Fears to Build a Harmonious Community’

Bangalore: The Metropolitan Archbishop of Bangalore, Dr. Peter Machado who was the main Celebrant for the Holy Eucharist on Day 6 of the 34th CBCI Plenary Assembly being held at St. John’s, Bengaluru, said in his homily that the day’s Gospel spoke of Jesus’ dialogue with his disciples who complained to him that they had no bread. 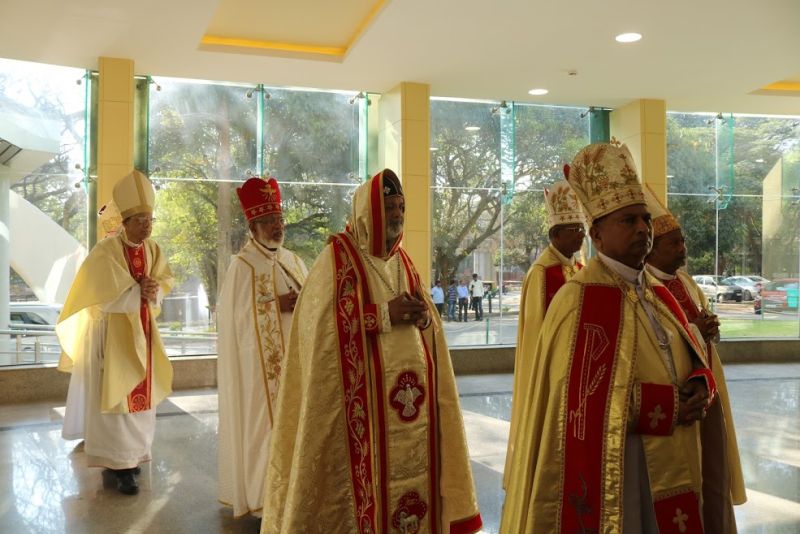 Jesus was surprised at their hardness of heart. In his reflection, Archbishop highlighted some points such as Jesus is constantly in dialogue with us. We are constantly complaining we have ‘no bread’. We cannot be complaining because God is working miracles among us, especially in the Church in India.

“In spite of skepticism, doubt and fears there is so much of growth and development happening around us. Faith is growing when proclamation is made. Martyrs (like those of Khandamal) are giving witness to Christian Faith. The Church rejoices when many Saints from India are being proclaimed as new models for future generations. All these are small miracles and blessings from God. God is at work among us. Let us not be discouraged. God has plans for the Indian Church. So, let us bless and thank God”. 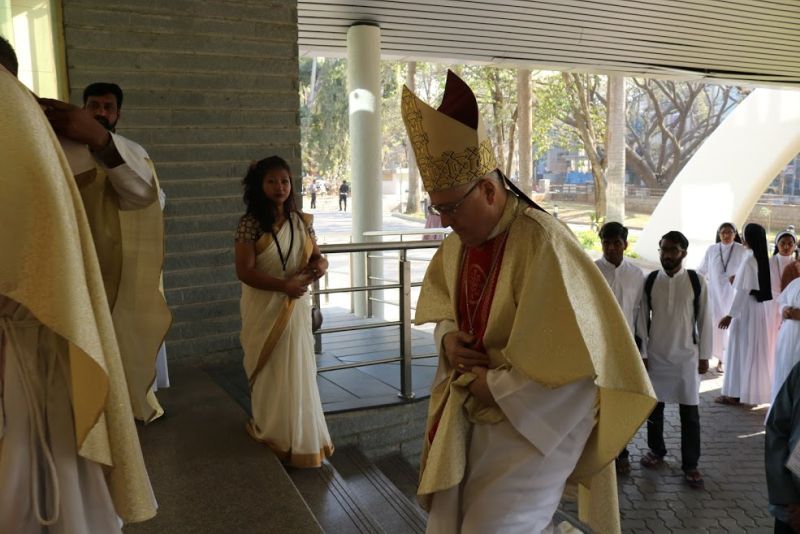 The Day’s Sessions included the reporting of the Laity and Youth Commissions along with CBCI Office for Doctrine; and Office for Dialogue and Desk for Ecumenism and Labour and Prison Ministry India. The Laity Commission’s reporting session was moderated by Archbishop Thomas D’Souza. And the Secretary Chevalier Adv. V C Sebastian presented the report.

The Laity Commission started their report by stating the commencing of the Commission and its meetings held at various places around the country between the time period of 2018 and 2019. During the time allotted for clarifications, it was expressed that it is sad to see that Christians do not get sufficient funds and support from the Government. 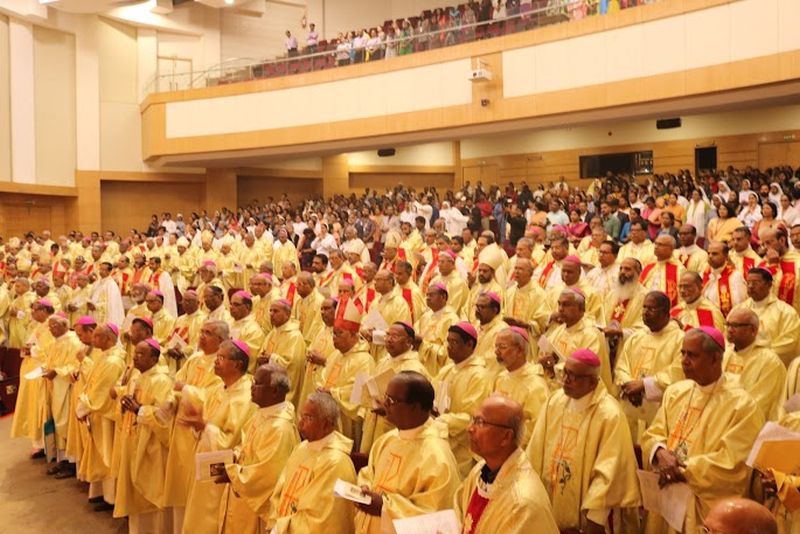 The Youth Commission Secretary Fr. Chethan Machado, read out the report in the presence of its Chairman Bishop Nazarene Soosai. Apart from the youth commission’s activities, the challenges that today’s Indian youth face were also mentioned. Some of the problems they face included the lack of data of migrant youth, the education disparity, sub-standard Church programmes for the youth, lack of animators, lack of faith formation and the expensive youth related resources (YouCat, DoCat, Christus Vivit). After this, the CBCI Office for Doctrine headed by the Chairman Bishop Thomas Mar Koorilos and Secretary Fr. Thomas Vadakkel presented the report.

A brief explanation was made about their functions, activities and future plans for the year 2020. It was highlighted about the mistakes in translating the doctrinal books in regional languages and they urged the local Bishops to take care of such observations and to initiate the necessary measures to solve the issues. The doctrines would be updated in upcoming days in major social platforms.

The Labour Commission, in its report, brought to the attention of the participants that lots of human trafficking was stopped and the victims were given proper guidelines and also were provided with proper jobs, especially in housekeeping and other departments in South India. The participants were informed that a Book containing guidelines on Human Resources is available for any clarifications on the effective use of labour and their safety in the workplaces. 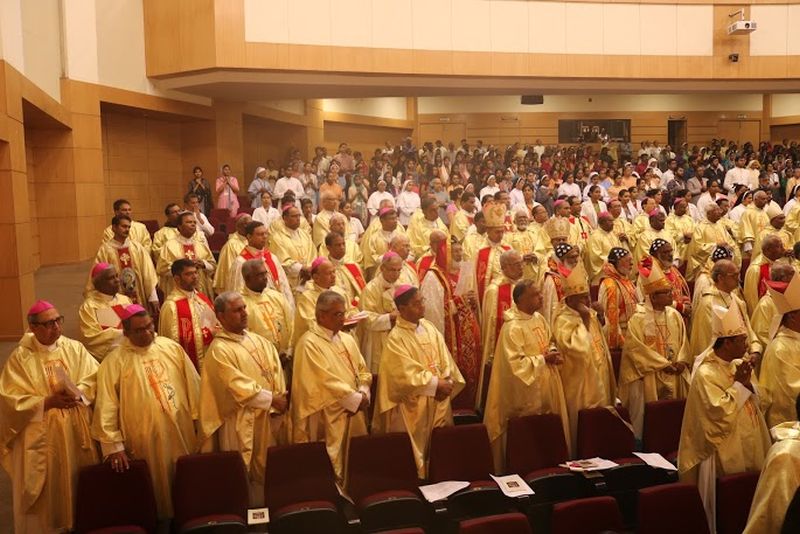 The Commission has taken measures for the uplift of the unorganized workers that constitute about 96% in the country who do not have any social security are helped to get Rs. 1000 from government grants. It also made Pan cards which provide permanent social security at their retirement age.

The Office for Dialogue and Desk for Ecumenism guided by Chairman Bishop Mar Joseph Perumthottam, Archbishop of Changanacherry, and animated by its Secretary Fr. Cherian Karukaparambil, has been doing commendable activities such as inter-religious dialogue and Christmas celebrations with Vaishnavites and other religious groups.

And it also conducted the unity prayer sessions in different parts of the country. Many workshops were conducted in religious communities and major seminaries highlighting the theme ‘Unity in Diversity’. At the august Assembly, Bishop Thomas Dabre released a Book on “Unity, Dialogue and Mission: Ecumenism and Interfaith Dialogue in Indian Context”, published by CBCI Office for Dialogue and Desk for Ecumenism.

It is claimed to be the guide to ecumenical ecclesiology and inter-faith Dialogue. Fr. Francis Kodiyan, Prison Ministry India, in his report stated that many programmes were undertaken. This included the release of many innocent people and also educating the children of the prisoners and providing them with shelter homes. A number of houses were also built for prisoners to live after their release. 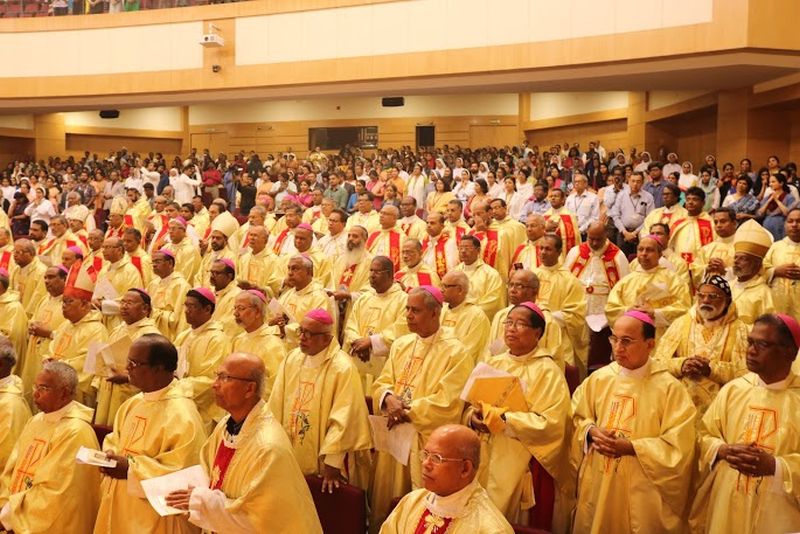 Through their workshops in different seminaries the seminarians were encouraged to participate in prison ministry. Every year the Prison Ministry Sunday is celebrated all over the country to pray for the prisoners and their families besides the Prison Ministry Volunteers. The money collected on particular Sunday was used for the purposes mentioned above.

“It is a great joy in heaven when one sinner converts and turns towards God”, was the concluding statement, which showed the hard work rendered by the members of the Prison Ministry to transform the hearts of the prisoners and to rehabilitate their families, especially the children and youth. The Bishops spent their evening in Prayer, Recollection, Adoration and Confessions.

Fr. Daniel preached to the participants the importance of inner healing and Dialogue with God and with one another. The participants very fervently prayed for their flocks and for the welfare of the nation.