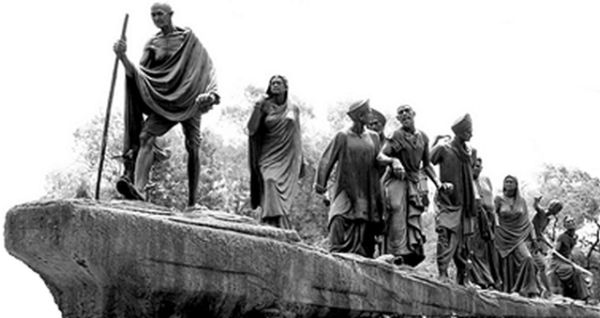 A brief history of the Indian subcontinent

India was first ruled by the East India Company from 1757 to 1858 and later by the Viceroys for the British Crown from 1858 to 1947.  Before British came and ruled India, she was doing quite well economically and during the Mughal rule, India’s GDP stood at 21% of the world’s economy.  India’s handicrafts, silk, spices, food grains, tools, raw materials and many other products had a good demand abroad.  India was quite an affluent nation with a good per capita income.  Once the British came, they put an end to the home industries and got cotton and raw materials other products produced here and sent to England, coming back as finished products to be sold in the subcontinent.

It was Mahatma Gandhi, backed by Jawaharlal Nehru and countless other freedom fighters who fought for the country’s independence, becoming victims of police brutalities and languishing in prisons for varied terms.  The British were master manipulators, who gave hundreds of princes the right to rule their kingdoms, but they had to pay royalties to the Crown and owe allegiance to her. Every kingdom had the Viceroy’s Representative or Agent meeting the ruler once a week.  When the Crown’s Agent went to meet the Nizam of Hyderabad, considered to be the world’s richest man and also a miser to the core, the servant would bring in a silver tray a cup of tea, one biscuit and one cigarette.  When guests in his palace had smoked cigarettes in their rooms, the Nizam would take the stubs and have a puff of them.  He was a born skinflint.

Great Britain would have ruled her Crown Colony of India and other territories in her empire in perpetuity or for long, but sadly in 1939, Sir Winston Churchill had to face that that tyrant and bully, Adolph Hitler and the World War II began in 1939 and lasted till 1945.  In the process, Great Britain lost lots of manpower and had to spend mind-boggling amounts of monies to fuel the war and also became indebted to America which extended lots of aid to her and Russia.  After the World War II ended in May 1945, Great Britain realised that it was in no position to hold on to its colonies, as they were short of civil servants and administrators.  Two years after the World War II, India got its independence on 15.08.1947.

Before independence, Hindus and Muslims lived happily and had cordial relations and social interaction.  It was the feudal lords of U.P. and Bihar, who came with the idea of a separate land for Muslims and they were also instrumental in  the formation of the Muslim League.

Mohammad Ali Jinnah was a brilliant lawyer, who started his career in Bombay and went to England and stayed there from 1893 to 1896, 1913, 1914 and then from 1930 to 1934.  Mohammad Ali Jinnah became very successful in his law, charging huge fees to take up clients’ cases.  He had his own Bentley car and a British chauffeur.  He lived in style and was involved in a very small way with the freedom struggle, though he did not physically take part in freedom movement or satyagraha or spend a day in jail or 10 minutes at a police station.  He hated crowds.  Muslims from U.P. and Bihar initially tried to sell him the idea of a separate homeland for Muslims and he was not receptive to it.  Initially, for the first two decades of 20th century, he was with Congress and later he had differences with Congress regarding its agitational politics and joined the All India Muslim League.  In 1940, he got reconciled to the fact of having a separate homeland for Muslims.  In the 1930s, at the urgings of Muslim League members, he returned to India to ready to take over as the head of the separate land that would be created for Muslims under the name of Pakistan or the land of pure.

In short, he got Pakistan on a platter.  Just before Pakistan got its independence on 14.08.1947, the majority of the Muslims from U.P. and Bihar had moved over to Pakistan and many of them became civil servants.  However, later Punjabis started dominating every facet of life in Pakistan and these Indian Muslims were called Mujahirs.  Today, they are regretting their decision to migrate to Pakistan, as they are treated as second-class citizens and cannot make much headway.  Muhajirs are mostly concentrated in and around Karachi, which was Pakistan’s first capital city.  Later Islamabad was created and made the country’s capital.  Today Karachi has become a lawless city and there is frequent firing by their Rangers and the Army resulting in many civilian deaths and casualties from time-to-time.

Mohammad Ali Jinnah was the most improbable leader to lead an Islamic nation because he was an Aga Khani, never said prayers or fasted during Ramadhan and did not attend the Mosque.  At the age of 40, he married Rattibai Wadia, a Parsi aged 18 years after she converted to Islam and he gave her the unthinkable amount of Rs. 125,000 as dowry.  He smoked “Craven” cigarettes, drank whisky, ate pork and wore Saville Row suits and shaved daily.  When he died, he left behind 300 suits.  He only spoke Urdu and could not write or read that language.  On behalf of Mohammad Ali Jinnah’s client, a verse from Koran was translated by Bhulabhai Desai.  The very next day a news item appeared in the media, “Maulana Bhulabhai Desai translates the Koran for Pandit Mohammad Ali Jinnah.”

It is quite surprising that he imported Urdu from Lucknow and U.P. and imposed it as a national language in Pakistan. Immediately after getting independence, Bengalis from East Pakistan wanted the government to make Bengali as one of the national languages. Mohammad Ali Jinnah refused and it was he who first sowed the first seeds of disintegration of Pakistan and birth of Bangladesh on 16.12.1971.  Other people responsible for the breakup of East Pakistan and formation of Bangladesh were Zulfiqar Ali Bhutto and Gen. Yahya Khan.  Many Indians who are not strong in history may not be aware that the Army Chief was Gen. Sam Manekshaw, a Parsi, G.O.C. East was Lt. Gen. Jagajit Singh Arora, a Sikh and his Chief of Staff was Maj. Gen. J.F.R. Jacob, a Baghdadi Jew.

In fact, when Sir Cyril Radcliffe, the reputed British lawyer finished drawing the boundary lines of the subcontinent to create India and West and East Pakistan, Lord Louis Mountbatten had told Mohammad Ali Jinnah that he feared East Pakistan would secede from the West Pakistan in 25 years time.  How prophetic his words were, because East Pakistan seceded on 16.12.1971, just eight months short of 25 years.

Kashmir problem would have been solved if Maharaja Hari Singh would have immediately signed the papers to join either India or Pakistan, rather than harbouring the idea of having his own Kingdom and running away from his palace to avoid meeting Lord Mountbatten and Indian representatives.  Lord Mountbatten had warned him that he should join one of the countries or he would have two hostile neighbours breathing down his throat and cited the case of last Russian Tsar and his family who were massacred at Ekaterinburg.  He was in love with one of Tsar’s daughter who was also killed.  Maharaja Hari Singh was indecisive and immediately after independence Mohammad Ali Jinnah sent his forces to grab Kashmir on 22.10.1947 and the fighting went on till a ceasefire was declared from 01.01.1949 and the stalemate goes on till today.  He and Jawaharlal Nehru are both responsible for the Kashmir problems, with Pakistani holding on to Azad Kashmir and India holding on to Jammu & Kashmir and the stalemate continues till today.

21% of the population were minorities in Pakistan and today due to persecution, there are hardly 1.5%.  There is discrimination against Shias, Ahmadis, Christian and Parsis.  The golden period of Pakistan was under the self-styled Field Marshal Ayub Khan and Pakistan fell to abysmal depths under Gen Zia Ul Haq, who introduced the Sharia laws, volunteered to help the Americans to fight the Soviet invasion in Afghanistan, rather than keeping his nose clean by avoiding aiding the Americans.  He did all this in order to pocket the substantial amount of billions that Americans gave his regime.  After the invasion, Pakistan should have got rid of Afghan refugees and fighters by sending them back.  This they failed to do, resulting in mushrooming of terrorist organisations which Pakistan is not able to destroy.  In short, Pakistan has allowed snakes to grow in its backyard.  Again, after the terrorist attacks in America on 11.09.2001, Gen. Pervez Musharraf willingly became a pawn in the hands of President George Bush, Jr. by accepting billions of dollars.  There is a beautiful saying in English, “Money makes the mare go.”  How true it is!

Every country is well known for something or the other.  Switzerland for its chocolates and beauty, France for its wine and being leader of tourism, Germany for its quality engineering products, Scotland for its whisky, Japan for its automobiles, Korea for its televisions and computers, Israel is acknowledged being leader of solar energy and water management, Saudi Arabia for its crude and dates, India for its Bollywood, I.T. professionals, world famed I.I.T. engineers and so on and so forth.

Pakistan is notorious for producing terrorists.