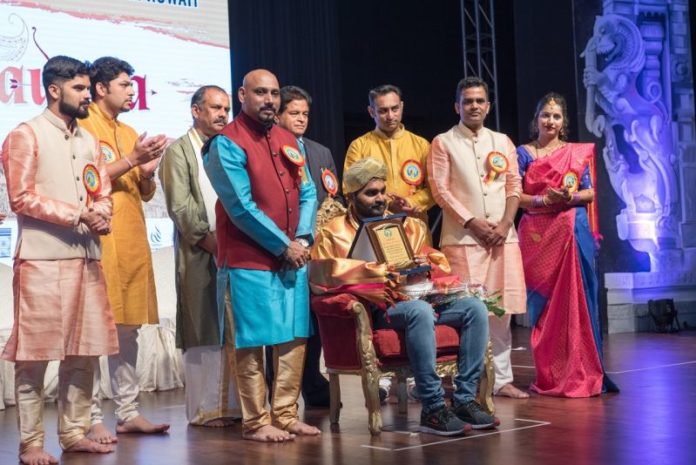 Kuwait: Buntara Sangha Kuwait (BSK) celebrated their 17th year of Annual cultural fest with grace and splendour under the leadership of Guruprasad Hegde to a grand success on October 18th, at the American United School Auditorium, Sabah Al Salem, Kuwait. 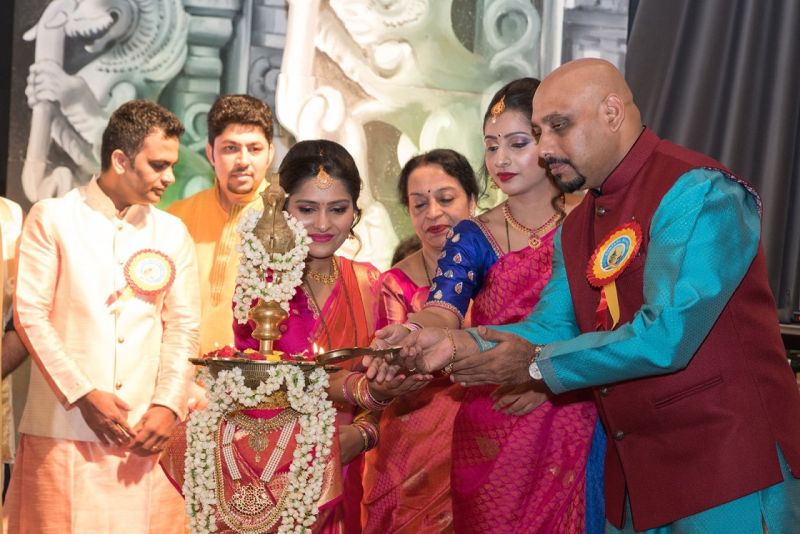 The Chief guests B Vivek Shetty and Shashidhar Shetty, along with the Guest Artists Manju Rai Muloor & Nishan Rai walked the aisle of the auditorium to the tunes of traditional chende and the warmth of aarti reception by the BSK ladies. 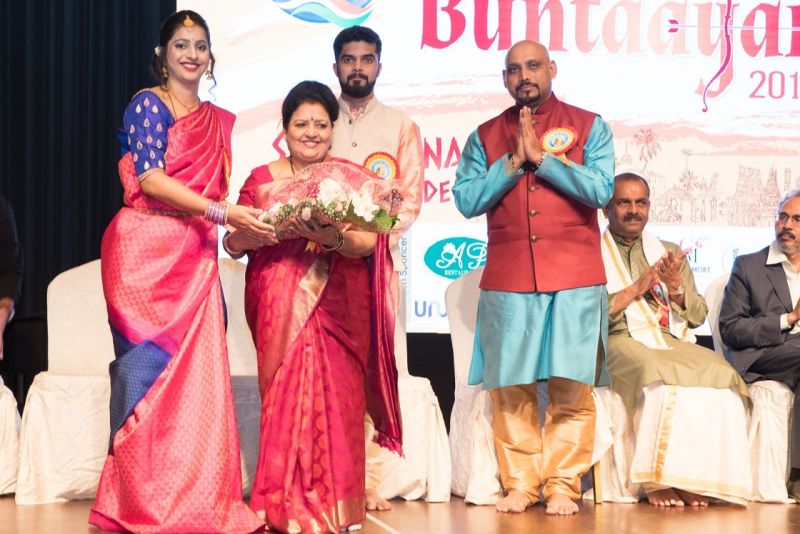 The Event for the day commenced with the National Anthem of Kuwait & India respectively, followed by a prayer song to Lord Ganesha by Amith Shetty, Lohith Shetty, Rajesh Pakkala, Sandesh Shetty, Prashanth Shetty, Deepa Shetty, Reshma Shetty, Laxmi Shetty, Sushma Shetty & Anusha Shetty. Invocation dance with Natasha shloka followed by Ganesha pushpanjali choreographed by Arundhati was well received by the audience with a thunderous round of applause. BSK Managing Committee, Ex-Presidents along with Chief Guests inaugurated the program with the lighting of the lamp. Guest of honour Indian Ambassador to Kuwait, K. Jeeva Sagar along with BSK Ex-Presidents, Managing Committee, Chief guests, Presidents of other south Canara associations were part of BSK Souvenir Release for the year 2019. 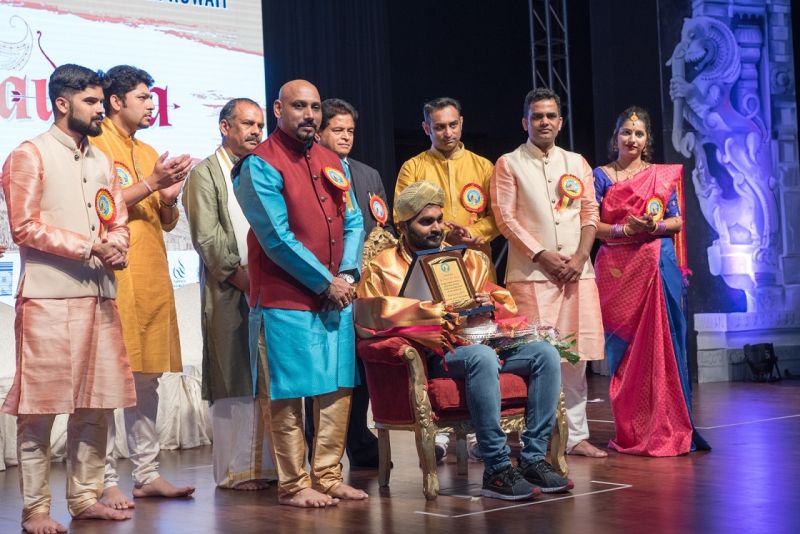 BSK Vice President Rakshak Shetty welcomed the chief guests and the audience and extended his best wishes to the artists and participants of Buntaayana 2019.

BSK felicitated their members Aikala Sudhakar Shetty, Kanjar Pattada Mane Vivek Shetty Belman and Chandrahas Shetty Kathalsar for their selfless service, long term support and contribution to the association. BSK felicitated the chief guests of the program, Shashidhar Shetty & B Vivek Shetty, along with guest artists Manju Rai Muloor & Nishan Rai. Both the chief guests addressed the audience with inspirational and thoughtful words to today’s society and the historic values of Bunts culture and tradition. 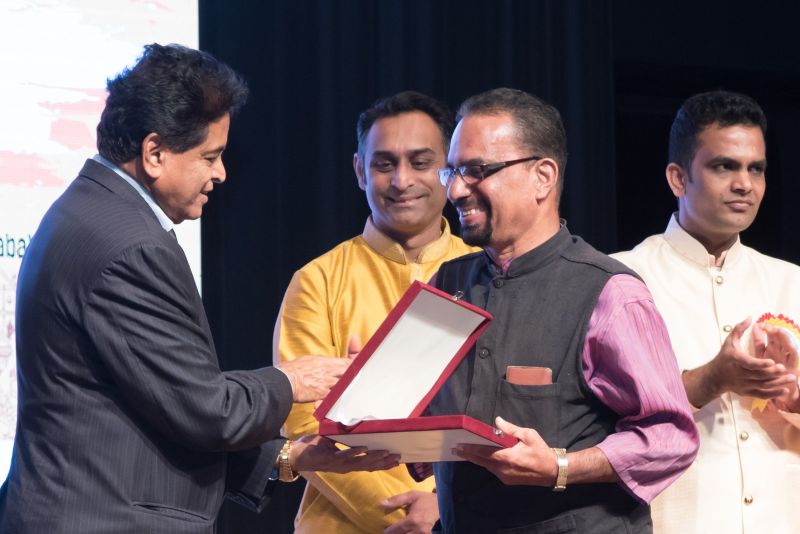 Educational Excellence & Sports Awards were distributed to our achievers, Khushi Prakash Shetty, Shreenidhi B Shetty & Yash Y Alva received for their X standard educational excellence while Prachetha Shetty for her XII standard and Prapti Shetty for her outstanding performance in Inter-School Sports excellence.

BSK President Guruprasad Hegde addressed the audience and highlighted BSK growth over the years, its role in society and their righteous welfare activities. He expressed his gratitude to his managing team and BSK members for their love and support. He thanked both the chief guests on gracing the occasion as well leading an exemplary role in the society and in particular among the Bunts community. 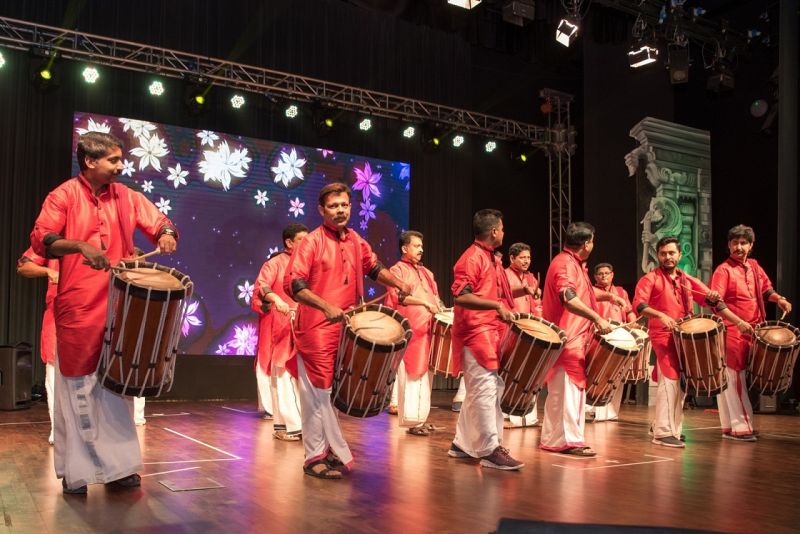 The Cultural event hosted by Manju Rai raised the audience cheers to his timely wit and humour. Known for his comedy timing, this young man kept the audience smiling as well as powerful in delivering a good message of leading a harmonious life and giving quality time to family. Nishan Rai, the young and dynamic sensational singer brought in melody who with his magical voice and beautiful rendition rocked the stage and entertained the audiences. The lighting and glittering sound with the interaction of these 2 guest artists with the audiences was well received. Nishan truly is a bundle of talent who not only lived to the crowd expectation but also made the crowd go full-on with few joining him on stage with some dance moves. Our own BSK lil champs with their innocence and sway dance moves choreographed by cultural secretary Shruthi Rai Pakkala was mesmerizing. Three Indian classical dances, Bharatanatyam, Kathak & Yakshagana set the stage live on fire with beautiful choreography from Prapti P Shetty, Archana Sinha & Manjula P Shetty respectively. The classical dance concluded with a fusion of contemporary moves and gracious synchronizing of rhythm. 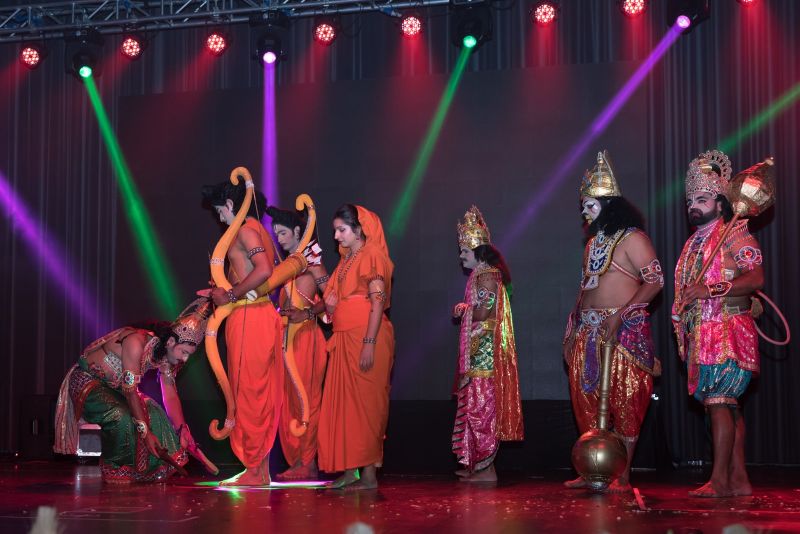 The highlight of the evening “Sri Ramana Dharmanade” a historical epic was enacted by close to 70 BSK artists. The artists performance was outstanding to standing ovation on a few occasions. The showcase of Rama-Sita swayamvar was so gracious and grandeur, the entrance of Ravana and his forceful dragging of Sita by dubious attempt was so powerful and dramatic, the killing of the divine bird Jatayu and his untimely death was far more emotionally enacted, the grand entrance of Hanuman with his vanar sena lifted the audience emotional mood, the background music of Jagadeesh Puttur was both melodious and foot tapping. The overall drama of close to 2 hours which started with a beautiful contemporary dance by BSK ladies was well received by the audience and finally concluded to a grand stage reception by all artists to a standing ovation and thunderous applause. “Sri Ramana Dharmanade” had scripts by Parmananda Salian & was directed by Satisha Acharya. The choreography was by Vidhushi Shanthala Satisha and overall led by Cultural Secretary Shruthi Rai Pakkala. 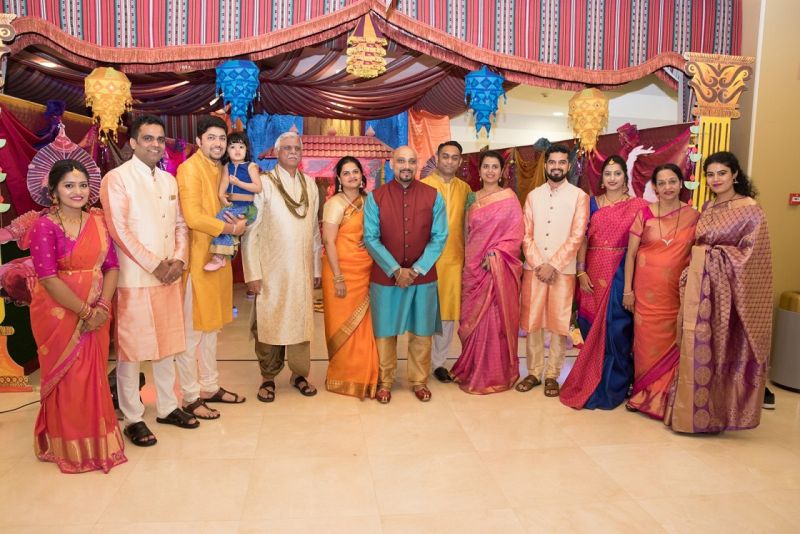 The managing committee led by President Guruprasad Hegde has made Buntaayana 2019 a huge success and has raised BSK benchmark in its cultural fest by far. The event was hosted by Dr Preeti Shetty, Shalini Vijay Shetty & Manju Rai Muloor and Program Co-ordinator Shruthi Rai Pakkala assisted by Jayasheel Shetty. The Sanadige (Traditional deepa/lamp) was beautifully dressed and decorated by Reeta Karunakar Shetty. The PRO team led by Prema Shetty along with her cultural sub-committee members decorated the reception arena to the theme of Diwali lanterns, lights, rangoli and temple in the foreground, the whole atmosphere was divine and so blissful. 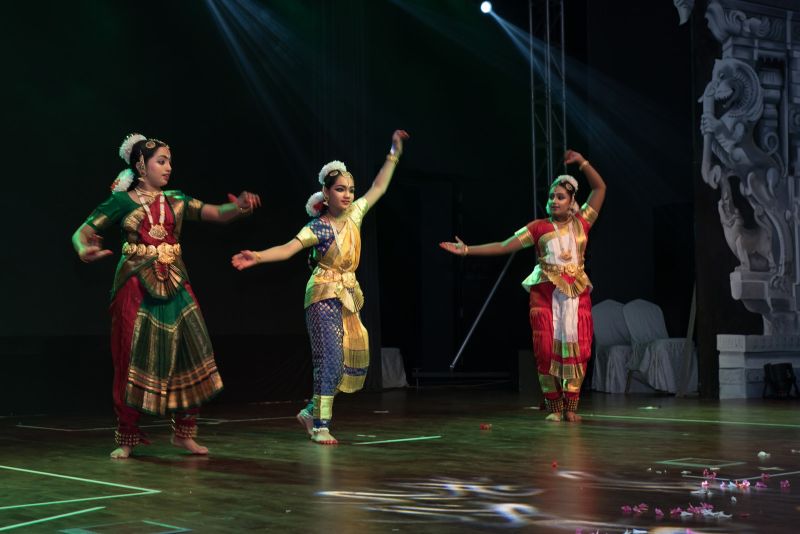 The event concluded with the vote of thanks by General Secretary Dhiraj Shetty. BSK extends its gratitude to the Management of American United School for their utmost support and beautiful venue for Buntaayana 2019. The audience were invited to a rich savory by the best catering service in Kuwait, Oriental Restaurant.