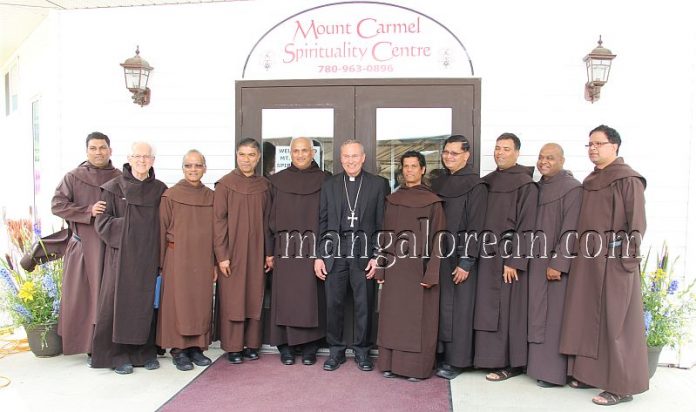 Over 300 people attended the inauguration of Mount Carmel Spirituality Centre. Auxiliary Bishop of Edmonton Gregory J Bittman, presided at the Solemn Eucharistic celebration on July 20, 2017, 11:00 a.m. at 1225 Township Road 535, Parkland County, Alberta. There was a grand reception after the Mass.

The solemn eucharistic was celebrated in the presence of regional superior, Fr Rudolf D’Souza, OCD, superior, Fr Mario Fernandes, OCD and many other priests from Canada.

Ephphatha House was started 28 years back as a project of the Community of the Presentation and has come to be known primarily for its promotion of the truths of the Catholic faith. It is a house of prayer, a retreat house, a gathering place for groups of all types seeking faith-centered activities and an atmosphere of devotion to the Lord.

Regional Superior, Fr Rudy, OCD promised fidelity and obedience to the Archbishop and Auxiliary Bishop of Edmonton. Further, he promised that Mount Carmel Spirituality would run under Christian and Carmelite Spirituality that would help to build Christian values.

About Discalced Carmelite Friars also known as OCD’s headed by Provincial Superior, Fr Charles Serrao is setup under the patronage of the great St Teresa of Jesus of Avila now presented in many states in India and overseas.

Their presence is seen in the dioceses of Karnataka, Maharashtra, Gujarat, Goa and overseas in Tanzania, Middle East, Europe and Canada.

For more information on Carmelites please visit their website :http://www.carmelbangalore.com