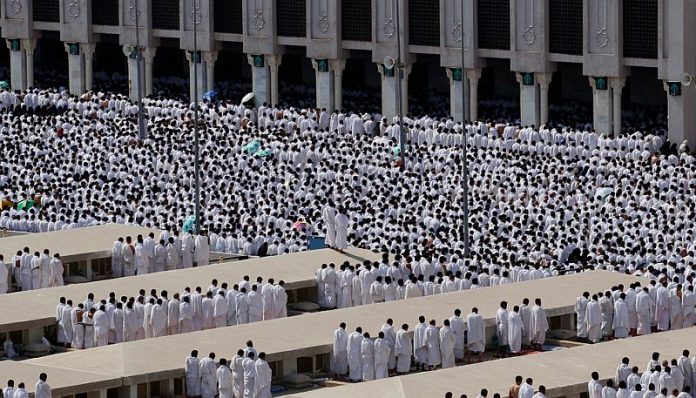 It is very rare that we see the opposition in agreement with the government on the decisions that have vast political implications. This is most often because the political parties are myopic and are concerned about vote bank politics and have no vision beyond the 5-year slots between elections. Must admit, It is a bold move by the Modi government to scrap the annual Haj subsidy that was given to the Muslims. The government justifies that this amount will be better spent on the education of Muslim girls.The government had no other choice but to comply with a Supreme Court ruling of 2012 directing the government to phase out the air travel subsidy to Haj pilgrims over a period of 10 years. Most of the opposition led by the Congress party is in agreement, even though there is no official statement lauding or disparaging this move. Should be recalled that It was the UPA government that was in power in 2012 and they chose not to implement it.

The amount in question is somewhere in the region of 400 crores every year.

What is this Subsidy?

It is a subsidy in the airfare given to Indian Muslim Haj pilgrims by the Government of India in the form of discounted fares on the state carrier Air India. Besides Air India, no other airline other than Saudia flies on this route. The airfare becomes more than double of the regular fare during the Haj season. The justification in the hike of fares from the airlines is that there are strict guidelines from the Saudi Government to be complied with and also during the beginning of the season the flights return empty from Jeddah and during the end of the season the flights to Jeddah are also empty.

The number of pilgrims from India on Haj Pilgrimage in the year 2017 was 1.7 lakhs and this year it is 1.75 lakhs. This is only 5% less than the pilgrims from Pakistan each year.

The government of India also incurs additional expenses in the form of other arrangements in India and in Jeddah as part of the travel that is not part of the subsidy. This expenditure is substantial and there are no official figures.

Will the government use the same yardstick to withdraw expenditure on other religious events?

The government allocation for the Kumbhmela in 2014 was 1,150 crores. The UP government spends about 800 crores for the pilgrimage to Ayodhya, Kashi, and Mathura each year.

Various state governments also spend a substantial amount of money for religious festivities and community appeasement. The Telangana Government also provides a token subsidy to appease the Christian community travelling to the holy land. The Department of Minorities under the Government of Karnataka allocates about 175 crores (2017) to an arm of the Minority Department called the Christian Development Council. This amount is doled out to Churches and religious bodies to renovate buildings and build community halls without any accountability or supervision. A cross-section of Christians in Bangalore believe that this fund should also be stopped as it does not serve the purpose and instead this money should be used to provide free education for the girl children from the Christian community up to class XII in the state across all government and private institutions.

The big question is how consistent is the central government going to be in implementing its decisions and ensuring that the funds released to the states from the central kitty are used specifically for minority development programs only. What is sauce for the geese should also be sauce for the gander. Otherwise, the poor minorities from across all communities such as Muslims, Christians, Jains, Parsis, and Buddhists will be compelled to demand that no one in the community should have cake until all of them get to have bread.

Agreed. Government should concentrate on good governance. Government should have no business funding any religious activity. Those religious groups who rob tax payers money to further their religious businesses have no right complaining about the break down of law and order when the fire reaches their door-step. They have no right then complaining about “SECULARISM” &c.! Government’s business is to provide good infrastructure, maintain law & order, control crimes, provide undelayed justice, regulate and monitor conformance with the laws, social security &c , so that all citizens(irrespective of their organisational leanings in their private and personal life) can live with… Read more »