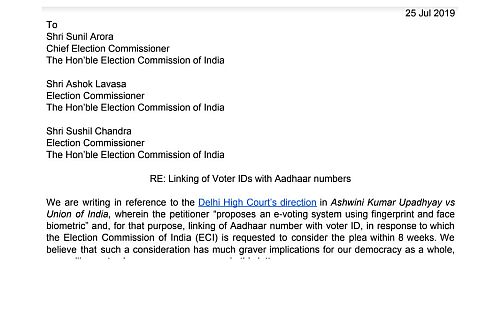 On July 16, the Delhi High Court directed the Election Commission of India (ECI), to consider a plea for an Aadhaar-based voting system, in response to a PIL filed by BJP member Ashwini Kumar Upadhyay. The petition “proposes an e-voting system using fingerprint and face biometric” and, for that purpose, linking of Aadhaar number with voter ID. Such a system, the petition claims, will lead to an increase in voting percentage while also preventing bogus or fraudulent voting. Crucially, the petition does not mention a single study or pilot programme whose results might support either of these two claims. The Election Commission is yet to respond to the High Court’s direction.

The main concerns with this proposal are the following:

While it is assumed that Aadhaar will help reduce bogus voter IDs, there is research to show that there are more errors in the Aadhaar database than in the voter ID database. So, it is unreasonable to expect that linking Aadhaar with voter IDs will help in reducing the number of fraudulent voter IDs.

Aadhaar is by design issued to all those who are residents of India including, for example, foreigners who have been legally staying here for an extended period. Aadhaar, therefore, is not proof of citizenship whereas voting rights are restricted solely to citizens.

This issue assumes even more significance in the light of a letter recently written by the Chief Minister of Maharashtra to the ECI recommending the linkage of Aadhaar with voter IDs. We have seen with Cambridge Analytica the dangers of voter profiling. In Andhra Pradesh earlier this year, the Telugu Desam Party was accused of misusing Aadhaar and demographic data – including names, photographs, caste information, and family details – of 3.7 crore voters. Investigative media reports indicated that another 2 crore voters were deleted from the electoral rolls in Punjab through the misuse of stolen Aadhaar data.

Over 200 civil society organisations and concerned citizens have signed their name to a letter which demands that the Election Commission proactively seek dismissal of this petition. The letter with the complete list of signatories is enclosed with this press release. Some of the notable names, among those who have endorsed the letter, include: