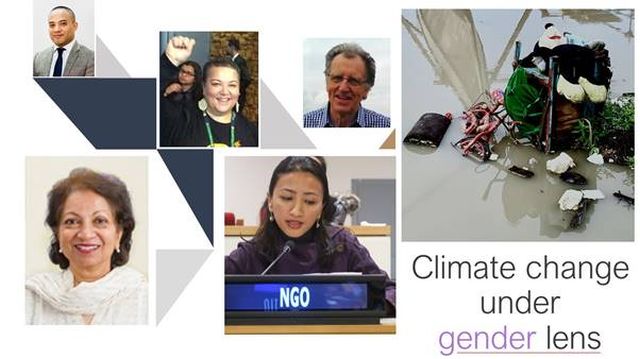 Countries in the Asia Pacific region are in the forefront of bearing the onslaught of climate change. During the last three decades, 45% of the world’s natural disasters have occurred in this region, which is vulnerable to floods, cyclones, earthquakes, droughts, storms and tsunamis.

While climate change affects everyone but the impacts of climate change-related events are not gender-neutral. Women and girls are more vulnerable and disproportionately impacted due to pre-existing gender inequalities that are perpetuated by patriarchal beliefs. These inequalities are exacerbated during times of disasters.

Biplabi Shrestha, Programme Director at the Asian-Pacific Resource and Research Centre for Women (ARROW), cites some of the gendered impacts of natural disasters as revealed by numerous studies done by ARROW: “In Bangladesh, even upon receiving early warning sirens women did not immediately seek refuge at cyclone shelters. Instead, they stayed back to manage the household and to safeguard their assets and livestock. There is also the added burden within the households and girls drop out of school to help gather energy, food and water for the family. Early age marriage is used as a coping strategy in many poor communities in Bangladesh, Indonesia, Laos and Nepal, despite child marriage being legally banned in them. During any disaster, sexual and other forms of gender-based violence within family increases. Also, women and girls are more exposed to sexual violence in shelter camps. Gender ascribed rules and household food hierarchy systems existing in most communities lead to food insecurity and malnutrition of women and girls. It also prevents women and girls from accessing healthcare services, especially sexual and reproductive health services. As a result, the maternal mortality rate goes up, and so do unwanted pregnancies, because of unmet need for contraception and lack of access to safe abortion.”

Natural disasters adversely impact maternal health and uptake of family planning services. However, two studies conducted by Population Council – one in Cambodia and another in Pakistan – show some very interesting results to the

A study on the 2013 massive floods in Cambodia, done by Dr Ashish Bajracharya, Deputy Director (global country strategy), Population Council, suggests that floods did not affect maternal health and family planning services uptake and outcomes, perhaps because flooding in Cambodia is endemic. So resilience and adaptation is likely high through years of experience. Also, maternal health service seeking behaviours might particularly be inelastic to shocks.

Another study done by Dr Zeba Sathar, Country Director, Population Council, Pakistan, on the impact of 2010 floods in 3 districts of Pakistan found that women’s involvement in both agricultural and non-agricultural work increased (as more men migrated in search of work) and they were forced to come out of complete ‘purdah’. Their health-seeking behaviour and family planning use also improved in comparison to the dismal baseline figures. This could possibly be linked with greater exposure and access to health services provided by responding organizations.

In fact, unmet need for family planning and maternal mortality ratio are two important indicators of the general status of sexual and reproductive health and rights (SRHR) across cultures in the region and give the scale of challenge in each country.

The global targets, that are a part of the UN Sustainable Development Goals (SDGs), are to (i) achieve universal access to family planning services – that is unmet need for family planning should decline to zero by 2030, and (ii) reduce the global maternal mortality rate to less than 70 per 100,000 live births by 2030. Achieving these targets will not only contribute to good health and wellbeing for women and girls but also lead to gender equality.

But perhaps it might be more realistic to achieve the goal of reducing the unmet need of family planning to 10% instead of zero by 2030, feels Dr Adrian Hayes, Honorary Associate Professor, School of Demography at Australian National University. He shares some interesting data on these two indicators for some countries of the Asia Pacific region: “As per estimates of UN Population Division, the unmet need for family planning target of 10% has already been reached by some countries of the region including China, Taiwan, Hong Kong, South Korea, Iran, New Zealand, Singapore, Sri Lanka, Thailand and Vietnam. But others have still a long way to go. In South Asia, only Bangladesh is expected to reach the 10% threshold by 2030, while Afghanistan, Pakistan, Nepal, India, and the Maldives are likely to miss it and remain around 20%. Similarly, in South-East Asia, Malaysia, Indonesia, Philippines and Myanmar appear likely to just miss the 10% target by 2030. In the Pacific Islands, there are many countries with higher unmet need at 20% or more in 2020.”

So while progress has been fairly good on these two indicators in some countries of the region, programmes in few South-East Asian countries need a dose of revitalisation to realise them by 2030. However, many countries in South Asia and the Pacific need major reforms in policies and programmes to make family planning services accessible to all women and to also reduce maternal mortality.

Biplabi rues that though sexual and reproductive health and rights and gender find a place in international agreements, there are no accountability frameworks within them to ensure that countries respect, protect and fulfil their commitments to basic human rights, which get further violated in times of crisis. There is lack or absence of gender mainstreaming and sexual and reproductive health and rights in most countries’ climate-related policies and programmes. Women are made invisible in the environment and climate-related discourses. This again perpetuates the vicious cycle of inequality for women and girls.

Noelene Nabulivou, co-founder of Diverse Voices and Action for Equality (DIVA) stresses upon the important linkages between sexual and reproductive health and rights and climate change, between disaster risk and response and elimination of violence against women and protection of LGBTQI human rights. She says that sexual and reproductive health and rights are central to any development response to pandemics (like COVID-19) and all natural calamities like floods and cyclones because it is the body where the damage and human rights violations are felt most.

All these deliberations took place during the fifth online session of the 10th Asia Pacific Conference on Reproductive and Sexual Health and Rights (APCRSHR10 Virtual). Undoubtedly, improving sexual and reproductive health and rights in Asia and the Pacific region will contribute to not only realising the vision of the 2030 Agenda for sustainable development but also help in resolving anthropogenic climate change.

(Shobha Shukla is the founding Managing Editor of CNS (Citizen News Service) and is a noted health and gender justice advocate. She is a former senior Physics faculty of Loreto Convent College and current Coordinator of Asia Pacific Media Network to end TB & tobacco and prevent NCDs. Follow her on Twitter @shobha1shukla)