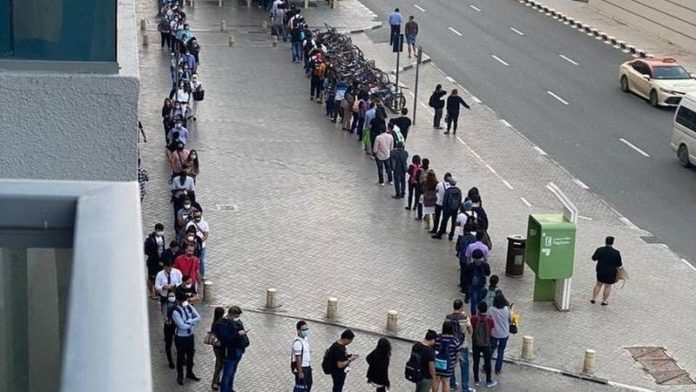 It’s said these measures are in line with taking extra caution in the interest of the public.

Metro commuters queued outside the station this morning, as they stood impatiently, confused, trying to comprehend the reason for the serpentine lines.

One of the main stations affected that saw kilometer-long queues of people waiting outside, were Al Rigga Metro and Burjuman Metro stations.

Khaleej Times spoke to a few commuters who waited outside for their turn to enter the stations.

Many even thought the metro had probably closed down in a bid to avoid crowds.

“Some people seeing the crowd thought the metro has stopped its services and a few even returned home. But I waited a bit longer to understand the situation”, said Bharati who travels for work from Al Rigga.

Another commuter, Mohammad Saad, whose office is at Burjuman metro station said, “I can see they are allowing ten to fifteen people at a time, so the good part is trains will not be crowded but it also means you are in greater proximity with people in the queue, so that is equally worrying.”

Anirban who occasionally takes the metro, said, he was taken aback, to see how limiting passengers was leading to long delays, “prior notice would have helped, as these days we are glued to the net for latest information. So, many of us got delayed today. But it’s after all in the larger public interest. So, we must be patient.”

Meanwhile, we wait for an official statement from the Roads and Transport Authority (RTA)e on the actual limitation on commuters in each wagon and the use of travellators and escalators in the station’s premises. This information will be updated as per further clarification.