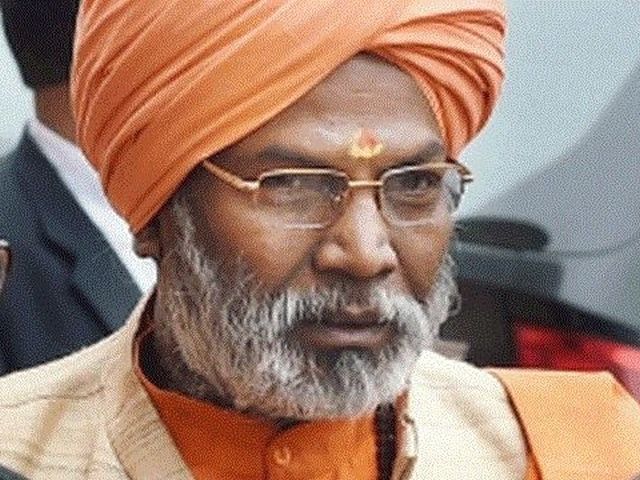 Demolish Jama Masjid, hang me if idols are not found: Sakshi Maharaj

Unnao: In what could stoke a fresh controversy, Bharatiya Janata Party (BJP) Member of Parliament (MP) Sakshi Maharaj has called for the demolition of Delhi’s Jama Masjid while asking the people to hang him if idols of Hindu deities are not found beneath the staircase of the mosque.

Addressing a public rally in Uttar Pradesh’s Unnao on Friday, the BJP parliamentarian said, “After entering politics, the first statement I made in Mathura was: Leave Ayodhya, Mathura and Kashi and demolish Delhi’s Jama Masjid. If you do not find Hindu idols beneath its staircase, you are welcome to hang me.”

Maharaj, who is known for making controversial remarks, even cornered the Supreme Court for delaying the verdict on the Ram temple issue.

“I condemn the attitude of the Supreme Court. They delivered verdicts on a number of cases of less significance, but they are deferring the Ayodhya matter. I expect Prime Minister Narendra Modi government to pass a law in Lok Sabha for the construction of a Ram temple in Ayodhya. I expect the construction of the temple will start before the 2019 Lok Sabha polls,” he asserted.

Jama Masjid is one of the largest mosques in India built by Shah Jahan between 1644 and 1656.

Maharaj’s statement comes at a time when scores of political leaders are seeking a government ordinance for early construction of Ram temple in Ayodhya.

On Friday, Shiv Sena leader Sanjay Raut even questioned as to why the Centre is taking so long to bring an ordinance for construction of Ram temple in Ayodhya when Ram bhakts (devotees) had demolished the Babri Masjid in just 17 minutes.

The Ayodhya dispute has been a talking point of late, a mass gathering by organisations such as the Vishwa Hindu Parishad (VHP) and some Hindu activists and saints will be held in Ayodhya on Saturday and Sunday. The mega show will coincide with a two-day visit of Shiv Sena chief Uddhav Thackeray to the city.