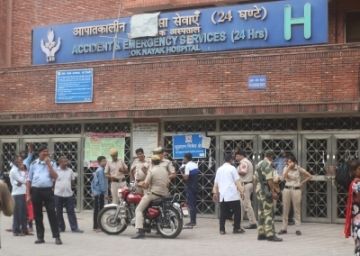 New Delhi: Resident doctors at various government hospitals in Delhi continued their strike for a second day on Friday, shutting down OPD and emergency services in protest against the National Medical Commission (NMC) Bill.

Doctors at Safdarjung Hospital in south Delhi blocked the Out-Patients Department and shouted slogans against the NMC Bill which was passed by the Rajya Sabha on Thursday.

“I came here all the way from Bareilly (Uttar Pradesh) to get my daughter-in-law operated but the hospital refuses to even hear my case due to the strike,” complained a despondent Rajini.

Like her, there are many who either squatted outside or waited on stretchers, praying that the strike would end soon.

“I spoke to the doctors to remove their doubts regarding the Bill. Being a doctor, I am aware about their concerns. We care about the interests of the patients as well as the doctors. This Bill will bring about major changes in medical education,” tweeted Vardhan.