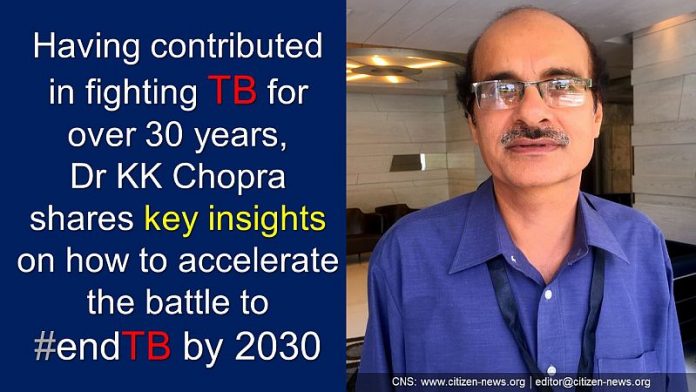 Wisdom of Nelson Mandela, “It always seems impossible until it’s done”, has only deepened in relevance and context when we review the fight against tuberculosis (TB), a curable disease which continues to be one of the top ten causes of death globally.

In lead up to World TB Day 2017, CNS (Citizen News Service) spoke with Dr KK Chopra, Director of New Delhi TB Centre, who has invested over 30 years in this battle against TB. Dr Chopra reflected on key gamechangers in past decades and shared key insights on upping the pace to end TB. This interview is part of CNS Inspire series – featuring people who have had decades of experience in health and development, and learning from them what went well and not-so-well and how these learnings can shape the responses for sustainable development over the next decade.

The UN Sustainable Development Goals (SDGs), as well as WHO End TB Strategy, are two major demonstrations of political commitment to end TB. But the ground reality puts these commitments in stark contrast to the abysmally slow pace of TB decline – year after year. In fact, TB cases and TB deaths actually rose in 2015 as per the latest data.

NTP TO RNTCP: MAJOR WINS BUT CHALLENGES AHEAD

“When I was a postgraduate student we practiced domiciliary treatment for TB. Back then, we had the National TB Programme (NTP), in which treatment was based on X-Ray examination, and its duration was of two years. We routinely asked patients while taking their history if they had taken ’90 injections’ to find out about previous treatments. Short-course therapy for TB was just beginning in those years. Although there was a reporting mechanism in NTP but complete data was not available of patients put on treatment or treatment outcomes,” shared Dr KK Chopra.

NTP WAS BARELY GETTING TIP OF ‘TB ICEBERG’

Today over 85% of diagnosed patients complete treatment. But in the early 1990s, only 30% were getting diagnosed and receiving treatment, and barely one-third of these were completing treatment.

IMPROVEMENT BEGINS WITH I

“That is why NTP was revised in 1993, and expanded in 1997, with help from DOTS strategy (Directly Observed Treatment Shortcourse) and became formally known as Revised National TB Control Programme (RNTCP). With the advent of RNTCP TB diagnosis with sputum test examination became more specific and treatment got shorter” said Dr Chopra.

“With RNTCP, there was a regular supply of quality-assured TB medicines. A box with all medicines for every patient was in the DOTS centre. In earlier NTP era there were very few days when we could get all the three drugs: Streptomycin, Isoniazid and Thiazides. At any given time, in the NTP era, it was very likely that either of the three drugs was not available. Many patients were not able to buy medicines from the market and had not much choice but to take the available medicines. This was also a reason why patients discontinued treatment in between” shared Dr Chopra.

The issue of drug stock-out has been raising its ugly head in RNTCP era too, but far less often than before. Making drug supply chain as efficient as possible is no less critical for ensuring treatment success.

MOST UNHAPPY PATIENTS ARE GREATEST SOURCE OF LEARNING

The cycle of “Diagnosing every TB patient accurately → providing effective treatment → ensuring cure” is absolutely non-negotiable, when it comes to public health as well as social justice. If patients are unable to complete treatment, or treatment is getting interrupted, this calls for emergency measures. These are important not-to-miss lessons to improve public health programming. In pre-1997 NTP era, 30% patients were getting diagnosed and put on treatment and one-third of these were completing treatment. Today, over 85% of patients complete treatment. We need to fill the gap and ensure no patient is left behind midway and receives full support to help get cured.

“Another achievement was the prompt retrieval of those patients who were dropping out of the treatment. In Delhi, there were only 10 chest clinics at the time of NTP; now there are 25 chest clinics with 500 DOTS providers. If a patient does not come to take treatment, DOTS provider should visit the patient either on the same day or the following day, give health education and bring the patient back to the programme fold. More than 85% of patients are completing the treatment today”, said Dr Chopra.

After 2008, there has been rapid progress in scaling up programmatic management of drug resistant TB (PMDT) services to care for patients with drug-resistant TB. It is alarming that the number of multidrug-resistant TB (MDR-TB) cases are increasing. “It might be that with rapid scale-up of availability of better diagnostics and laboratories across the country, we are able to diagnose more patients who we might have been missing earlier”, said Dr Chopra.

“Another breakthrough towards ensuring early and accurate diagnosis of TB in India has been the introduction and scale-up of rapid TB diagnostics. Previously it took us 3 to 4 months to diagnose a case of MDR-TB, but with rapid diagnostic facilities now we can confirm TB and MDR-TB both within two hours and initiate appropriate treatment. This has been a game changer. We are not losing patients now!” explained Dr Chopra.

“There is no doubt that we have to reduce the duration of TB treatment. This will majorly help improve programme outcomes. After a long gap of few decades with no new TB drug on the horizon, finally, we have got the WHO endorsement for a shortcourse MDR-TB regimen: 9 months MDR-TB regimen instead of 27 months regimen! I feel this endorsement came a bit late and could have come a few years earlier and helped us respond better to MDR-TB crisis”, reflects Dr Chopra.

Dr Soumya Swaminathan, Director General of Indian Council of Medical Research (ICMR) and Secretary of Department of Health Research, Ministry of Health and Family Welfare, Government of India, recently shared with The Indian Express that Delamanid might become available in India within 3-4 months.

Bedaquiline was launched in India before World TB Day 2016 for 600 patients across India. To review the progress since then, with World TB Day 2017 ahead of us, Bedaquiline is available in five cities now: Delhi, Mumbai, Chennai, Guwahati and Ahmedabad, and only a little over 200 patients have got the benefit. 400 doses still remain which were made available last year under compassionate use. Is this acceptable with the ground reality globally being that hardly one-fifth of those needing MDR-TB treatment are receiving it?

Over 80% of people with TB first attend the private sector, yet substantial diagnostic delays occur, and diagnosis and treatment are of variable quality. This, combined with the absence of drug quality controls, leads to drug resistance. This urgently necessitates enhanced engagement with the largely unorganised and unregulated private sector which accounts for at least half of those treated for TB in India.

“In the new National Strategic Plan for 2017-2025 of Government of India to fight TB, we are focusing more on interfaces between the public and private sector and recommending public private partnerships (PPP) based approaches to help improve care for TB patients in the private sector. The public programme can provide health education, build the capacity of private practitioners to treat TB patients more effectively and/or support them in form of logistics, diagnostics and, may be, free drugs to the patients even in the private sector. We have tried such pilots in three districts of Patna, Mumbai and Mehsana, where we gave drug vouchers so that patients in private sector can also get free drugs, while being cared for by their private doctor, and continue the treatment regularly. This has given good results of 18% TB patient notification from the private sector. Now we are introducing it throughout the country” said Dr KK Chopra.

The government of India made TB a notifiable disease in May 2012. Since then, more than 0.4 million TB patients were notified from the private sector till the end of 2015. Significant cost reduction of select diagnostics has been achieved by Initiative for Promoting Affordable and Quality TB Tests (IPAQT). 131 private sector laboratories have been networked by IPAQT to provide four quality tests for TB at, or below, the ‘ceiling prices’.

OTHER ‘COG IN THE WHEELS’ TO #ENDTB

One of the key components of implementing WHO End TB Strategy is to provide social support and end the catastrophic costs for TB patients. “Nutritional support, psycho-social support, financial support (may be in form of insurance) and rehabilitation of patients with TB are other critical ‘cogs in the wheel’ to end TB. At times, physical activity of TB patients decreases despite being cured. Rehabilitation assistance will help prevent relapses in future also. The new NSP (National Strategic Plan) will address these aspects too”, shared Dr KK Chopra. People and healthcare providers need to be made aware and motivated to fully utilise the facilities available in the public sector, such as quality assured diagnostics and treatment for TB and drug resistant TB.

CNS (Citizen News Service) team had met Dr KK Chopra in 2013 when he shared very initial details of a proposed study on TB in Delhi prisons. We checked with him on the progress since then. He shared with us a brief update: “We have sensitised the staff nurses, doctors, paramedical staff on TB related issues in prison of Delhi state. We have established a DOTS sputum microscopy centre in the prison too. We held discussions with authorities and have got their nod to conduct the study in prisons. In this study we will not add any other staff, rather utilise the staff that is already working in prison settings. These paramedical staff will help us identify TB symptomatics and seek help from the already functional DOTS centre in prison for diagnostics. We are also planning to include a Gene Xpert machine too by collaborating with DDU Chest Clinic. All sputum samples will be collected and, with help from the transporter, transported to DDU Chest Clinic where tests will be conducted by Gene Xpert machine to not only accurately diagnose TB but also test for drug resistance. We are planning to identify and build the capacity of some inmates to act as monitors so that they can help identify TB symptomatics. Based upon results, treatment will be initiated from the DOTS centre which already exists in the prison. In prisons, a large number of people are under-trials so we are working with prison authorities to link those inmates, who are being released, to the DOTS centre nearest to their homes. This will help the patient continue the treatment after being released from the prison. The mechanism of proper referral has to work properly and very efficiently if we have to make this programme succeed.”