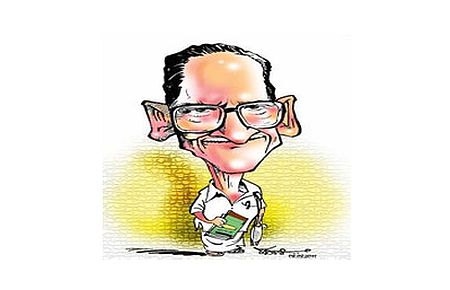 Senior journalist Padyana Gopalakrishna (PaGo) wrote a column titled ‘Vishesha Srushtigala Lokadalli’, which was released as a weekly column in Hosa Digantha during 1995. This column in which Pa Go penned down his experiences portrays the various phases and faces of journalism. As a working journalist himself, Pa Go’s works not only stands out as a unique piece of writing in terms of column writing and Kannada literature, it also stands as his own autobiography.

‘Vishesha Srishtigala Lokadalli’ is a column that reached the hearts and minds of people in 1995 through the Hosa Digantha Kannada daily. Today, after 22 years that column has been compiled into a book titled ‘Anubhava Anubhaavagala Naduve’. This book is the third title to be brought out by the Kanthavara Kannada Sangha as a part of their ‘Samskruti Samvardhana’ series.

The book is set to be released at 10 a.m. on 18 February 2018 in the K B Jinaraja Hegde Memorial Kannada Bhavan which is a part of the Kathavara Kannada Sangha situated in Karkala taluk of Udupi district. The programme will be graced with the presence of senior statesman and thinker Dharwad Sri Chandrakantha Bellad as President. Senior writer Dr Erya Lakshminarayana Alva will be releasing ‘Anubhava Anubhavagala Naduve’ published by Panchajanya publication, Bengaluru.

The release of this book 20 years after his passing stands proof to the fact that despite not climbing the steps of High school, Pa Go’s writings remain evergreen.

Padayana Gopalakrishna’s birthplace is Adyanadka which lies on the border of Dakshina Kannada and present-day Kasaragod districts. Born in 1928, he entered into the world of journalism in Bengaluru. His first foray was in 1956 through the Kannada daily ‘Vishwa Karnataka’. Later, he worked in Tayinadu, Congress Sandesha and Samyukta Karnataka. He also had a stint as the Bangalore correspondent of Madikeri based paper Shakthi.

Coming to Mangalore in 1959, he worked as a Sub Editor in Navabharata and Kanndavani Newspapers before shifting to The Indian Express, Kannada Prabha, Samyukta Karnataka, Munjane and the Times of Deccan. In 1963-1964, he worked in all parts of journalism, becoming a reporter, printer and publisher of his own Kannada weekly newspaper “Vartaloka”. He retired from a career of active journalism after working for nine years till 1994 for Times of India. He left the mortal world on 10-8-1997, ending his streak in freelance column writing.

Pa Go contributed as a columnist in various newspapers during the four-decade-long period from 1956 to 1997. The written literature is estimated to be more than four thousand pages. This is also credited with the works ‘Belliya Seragu’, ‘Gun Bow Street’ and ‘O.C. 67’ to Kannada literature. The former being a social novel while the latter two are investigative novels.

Padyana Gopalakrishna was the founder member of the undivided Dakshina Kannada District Working Journalists Association and was the first secretary of the same. It was inaugurated on 6 October 1976, by Karnataka state news and power minister. Every year, the PaGo award is being bestowed on the journalist with the best story on rural journalism.