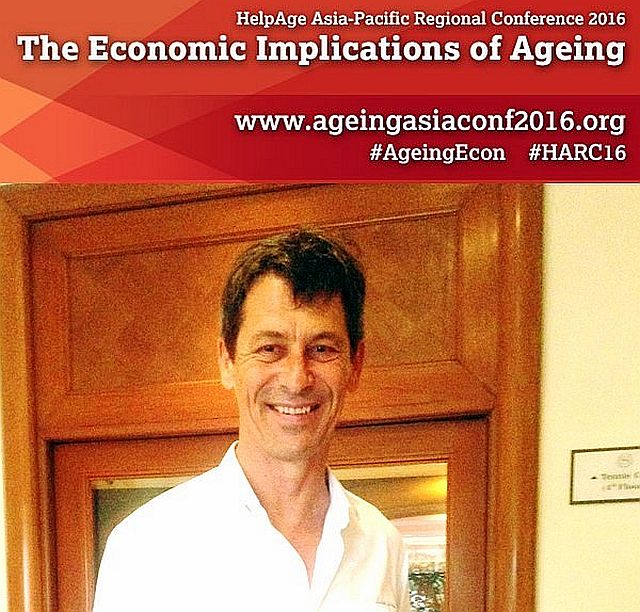 (CNS): With declining fertility rates and increasing life expectancy, the proportion of people aged 60 and over is growing globally. There are currently 900,868 million people aged 60 or over worldwide (12.5% of the global population). Nearly two-thirds (533 million) of them are in the Asia-Pacific region and it is at the forefront of the global phenomenon of population ageing. Due to their longer life expectancy, women constitute the majority (53.5%) of the population aged 60 or older in this region. In 2013, there were 229 million older men and 261 million women above 60 in the Asia-Pacific region.

This feminisation of ageing is an important and yet highly neglected women’s issue. It has profound and far-reaching social, economic and political implications. The gender dimensions of ageing are in the forefront of the HelpAge Asia-Pacific Regional Conference 2016, being currently held in Hanoi, on the theme of ‘The Economic Implications of Ageing’. There is a general consensus that female senior citizens are more disadvantaged than their male counterparts.

In an exclusive interview given to CNS (Citizen News Service), Dr John Roland Beard, Director of Department of Ageing and Life-Course at the World Health Organization (WHO), agreed that there are many issues that specifically confront older women. Women tend to live longer than men and also tend to get married to men older than themselves. So a higher proportion of older women are likely to be widowed without adequate income support. Economically, women in many countries do not have the opportunity of building the same social security safety nets as is available for men. Men are often the primary earner in the family, and when the man dies, the pension amount (if any) is reduced or becomes totally inaccessible to the widow. In some parts of the world, like in Africa, women have no ownership rights over property, and when the husband dies the widow is reduced to penury.

Dr John Beard lamented that apart from economic and health problems, they have to grapple with isolation and loneliness too. In his candid opinion, “There is also the issue of sexuality in older people. Older people too have sexual rights just as younger people do. But sexual rights of senior citizens are not spoken about at all and society holds to deny that they too like to have sex. This becomes particularly harder for older women who live alone. This issue should not be brushed under the carpet.”

Thelma Kay, former Chief of the Social Development Division, UNESCAP and Senior Advisor on Ageing Issues, Ministry of Social and Family Development, Singapore, echoed similar sentiments. “Many women do not work and even for those who work, their careers are often interrupted due to the raising of children and other family issues. As pensions are usually built up over working years, women often do not have that cushion of security in their old age that men have”.

Thelma pointed out that even though women live longer than men, their health does not remain as good. Instead of compressed morbidity women suffer from expanded morbidity. Women have different sets of medical problems and people do not realise that. They are sicker for longer periods – more so because of childbearing and other reproductive health-related issues. Thus older women face worse health and financial security problems as compared to men.

Unfortunately, these special issues of older women are not been given due attention. Women need to be educated enough to take care of their health and genealogists should be trained in women health issues more, felt Thelma. Older women too should have their own social networks which should be strengthened.

Mathew Cherian, Chief Executive of HelpAge India, finds Indian women becoming more housebound as they grow older. “In Delhi, we deal with around 600 associations working for older persons. But while older men do join in big numbers older women do not. Their participation is very low in all of them. But in religious places like temples, gurudwaras, and churches older women participation is more”.

This could also be the result of stereotype social constructs wherein after a certain age, Indian women are expected to spend all their time in prayers and other religious activities. Older women tend more to be part of prayer groups – singing hymns and bhajans. Mathew felt that perhaps one could involve older women could be involved in more socially productive activities through faith-based organisations.

Gender inequality and discrimination against women are perpetuated into old age. Women are more vulnerable to falling into poverty, often being more financially dependent than men due to lower participation in the workforce and lower education levels.

The invisibility of older women is a serious global issue. The new post-2015 Sustainable Development Goals (SDGs) recognise the importance of older people and ageing for sustainable development. SDG-3, which talks about ensuring healthy lives and promoting well-being for all at all ages, is particularly relevant.

Policymakers must focus on the challenges faced by an ageing female population and make inclusive policies for older women. They should not be left behind. The challenge is to ensure that governments follow their commitments around SDGs, by putting these goals into practice in a way that is fully inclusive of women and men of all ages.