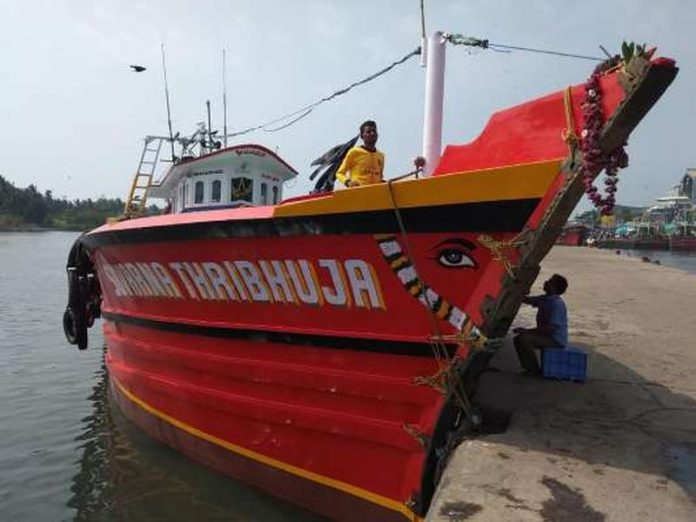 Udupi: In a major success after four-and-half months the fishing boat Suvarna Tribhuja, which had set sail from the Udupi coast and had gone missing, the Indian Navy has found its wreckage off the Malvan coast in Maharashtra. All the seven crew members of the boat are feared dead.

The Indian Navy spokesperson in their tweet said, “After an intensive search by ships and aircraft since December 2018, we have located the wreckage of the fishing boat 33 km of the coast of Malvan on Wednesday. The wreck was found through ‘Side Scan Sonar’ operations and confirmed on Thursday by naval divers.”

INS Nireekshak set out in search of Suvarna Tribhuja last week along with experts and a few fishermen along with Udupi MLA Raghupathi Bhat. During the search using ‘Side Scan Sonar’ technology, they found the wreckage on Wednesday 60 ft deep in the sea. Expert divers on Thursday reached the wreckage and confirmed it as that of Suvarna Tribhuja. The navy has not commented on the missing crew, but sources said there is no chance of their survival.

The wreck was found through Side Scan Sonar operations and confirmed today by Naval Divers undertaking saturation diving at a depth of 60 metres.2/2 pic.twitter.com/SuVFNEpOnz

The vessel had gone for deep sea fishing from Malpe harbour in Udupi on December 13, 2018. The seven fishermen on board included five from Uttara Kannada and two from Udupi. On December 15, 2018, when the vessel was off the Malvan, it lost contact with other fishing boats and the harbour. Since then, there has been no word about the vessel nor the crew.

Missing Fishing Boat Wreck Found by #IndianNavy – After an intensive search by ships & aircraft since December 2018, #IndianNavy has located the wreck of fishing vessel Suvarna Tribhuja 33 km WSW of the coast of Malvan. The wreck was found by #INSNireekshak on 01 May 19. 1/2 pic.twitter.com/23ZVJ3XfxZ

Ever since the vessel went missing, ships, choppers and aircraft of the Indian Navy, Coast Guard and Coastal Security Police had scoured the seas, but could not find any clue. Defence minister Nirmala Sitharaman had also visited the missing fishermen’s houses in Udupi.

Fishermen Laxman, Ravi, Harish, Satish, Ramesh of Uttara Kannada district and Chandrashekar and Damodhar of Udupi district were on the fishing boat. With no word about them, the families could only hope against hope that they would return home.