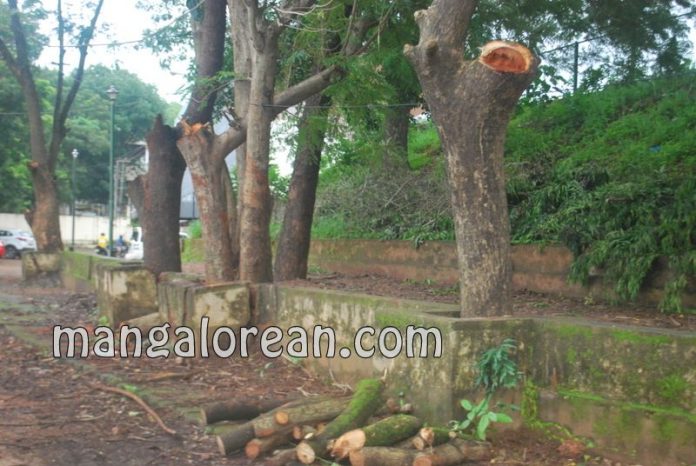 Mangaluru: Following close on its heels after Environmentalist 107-year-old Saalumarada Thimmakka and her foster Son Umesha had appealed to the citizens of Mangalurunot to cut down trees, instead plant more saplings for a better and cleaner environment, but here we have an incident taken place a few days ago where a tree was chopped down, and 14 other trees trimmed by a local volleyball coach, by hiring a contractor.

The incident was brought to light by a activist Sashidhar Shetty on Thursday morning, which led the Forest Department to book a case on volleyball coach Narayan Alva and a tree-cutting contractor for the alleged illegal felling of a rain tree and the pruning of 14 other trees in and around the volleyball training ground adjoining the Mangala Stadium in the city.

When Team Mangalorean contacted P Sridhar, the range Forest Officer he said, ” Even though the trees were felled few days ago, the incident was brought to our knowledge by activist Shashidhar Shetty on Thursday morning. A three-decade-old rain tree near the volleyball training area had been cut down, while branches of Ashoka and 13 other trees in the area between the stadium and the volleyball ground has been pruned. Even though an application was made by Deputy Director of Youth Services and Sports Pradeep D’Souza to our office on June 4 seeking permission for felling and pruning of some trees whose branches were likely to fall down and cause harm to volleyball players training at the ground, but before we could send the personnel, the sports department had got the contractor, who illegally cut down the old tree on Wednesday. Pruning of branches of other trees was done on Monday and Tuesday,”.

Meanwhile Narayan Alva, a senior volleyball coach who trains State and national level volleyball players at the court adjacent to Mangala Stadium clarifying on this incident said, “The application for pruning of trees was made a day after the fall of a branch of the old rain tree when the training was on. I was concerned about the safety of around 100 volleyball players . Hence I requested the department for pruning of the old rain tree near the practice area and other trees outside. But I was really shocked to see the contractor had felled the old tree, which was among the several trees in the area that served as shelter for players. The personnel of the contractor carried out their work between 9 a.m. and 4 p.m. when there was no practice session, so I was unaware of it”.

It is learnt that the video made by Sashidhar Shetty about the act went viral in social media, and in response there were quite a few calls made by concerned citizens/environmentalists to Deputy Conservator of Forests V. Karikalan and Pradeep D’Souza condemning the decision taken by the volleyball coach and the illegal act of tree cutting contractor.