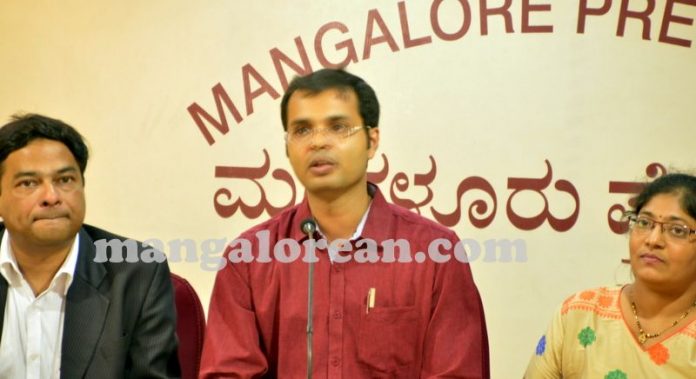 Mangaluru: “CAE Healthcare in association with Macula Healthcare is organising HPSN INDIA 2016, The First International Conference on Healthcare Simulation in India, on 3 to 4 December 2016. Institutes having the country’s advanced simulation centre, Father Muller Medical College and Yenepoya University will co-host the conference. This conference will be attended by more than 300 participants who will include resource faculty and delegates from all over the world”, said the In charge of the Simulation Centre, Fr Muller Medical College, Dr Ritesh Joseph D’Cunha in a press meet held at the press club, Urwa, here on November 25.

Addressing the media persons, CEO (Growth & Strategy) Macula Healthcare, Tarabrata Bhattacharyya said, “Medical simulation” a new terminology is a branch of simulation technology related to education and training in the medical field. The history of medical simulation dates back 15 to 16 years in the western world, but it India it is a new and developing concept and is a new method of teaching medical students, paramedical students and nurses. We represent a company called Macula Healthcare and we are proud to say that we have done simulation labs in Father Mullers Medical College and Yenepoya. These labs are first of it’s kind in terms of equipment and space and is beneficial not only to the students but also the faculty. Just like we have flight simulations done by leading US company CAE Healthcare, where every pilot undergoes training and up to 200 hours of flight simulation before they even touch a plane, Medical Simulations help the students to understand their field before they can practice it on real patients.”

He further added, “CAE Healthcare does an annual event called HPSN- Human Patient Simulation Network, which is conducted in the US, and now spread to Europe and Asia-Pacific and now in India. Mangaluru being the number one simulation city of India and having the maximum number of simulation training labs due to all the well-known medical colleges is the ideal place to hold the HPSN India Conference.”

He further elaborated on the conference schedule, “On November 3, we have a pre-simulation conference in which 5 international faculty members from Singapore, United Kingdom, Australia and Malaysia will deliver a talk on how to do a simulation on a mannequin and how to teach the medical students with the mannequin. The delegates will have first-hand training on a simulation, such as ultrasound Simulation, birthing simulation and others.”

“The last day”, he said,” is the first day of the conference, where international as well as national leading simulation educators, will be attending to talk about their experience with medical simulation.”

He concluded by saying, “A special ‘Disaster Drill’ will be performed, to show how the general public can tackle a wide scale disaster such as a blast, with the help of the fire and police department. I invite all the media persons to attend this ‘Disaster Drill’.

The Inaugural program of ‘HPSN INDIA 2016’ will be held at Father Muller Medical College on December 3 at 10 am, which will have the Minister of Medical Education, DR Sharan Prakash R Patil as the chief guest and the Director of FMCI, Fr Patrick Rodrigues as the Presiding Officer.

The Valedictory program will be held at Yenepoya University on December 4 at 10:30am, which will have the Director of Medical Education, DR Sacchidanand as the Chief Guest and the Chancellor of Yenepoya University, Yenepoya Abdullah Kunhi as the Presiding officer.