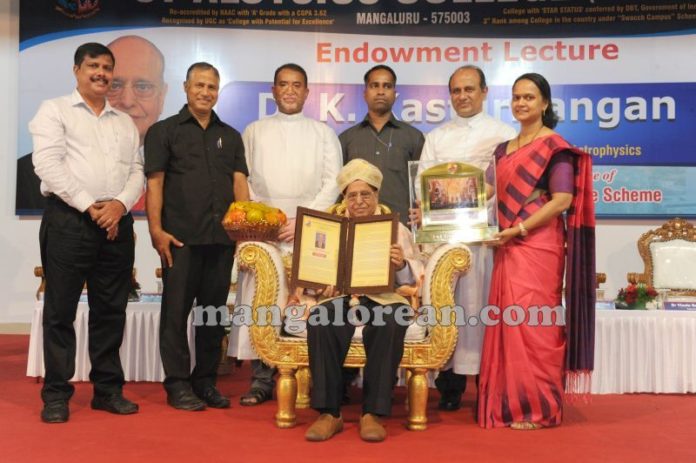 ‘Forays into Space and Beyond’- A Endowment Lecture by Dr K Kasturirangan-Former Chairman of ISRO held at St Aloysius College, Mangaluru on 4 December 2019

Mangaluru: St Aloysius College (Autonomous), Mangaluru organized an Endowment Lecture on the topic ‘Forays into Space and Beyond’ on December 4, 2019, at L F Rasquinha Hall, LCRI Block. Dr K Kasturirangan, Former Chairman of ISRO and Chairman of the Committee for Drafting National Education Policy was the Speaker. 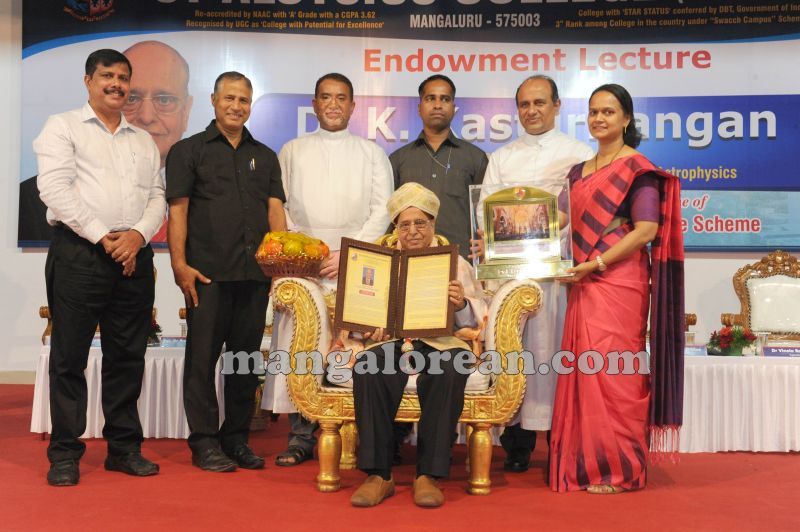 Rev. Fr Dionysius Vas SJ, Rector, St Aloysius Institutions presided over the programme. Dr Fr Praveen Martis SJ, principal, St Aloysius College, Dr John E D’Silva, Director of Xavier Block, Dr Ronald Nazareth, Coordinator of the programme and Dr Vinola Rodrigues, Convener of the programme were on the dais. Rector in his presidential address, briefed on the Indian space programmes. He said that space research has given so much to the world. He emphasized the role of sustainable development goals which would definitely be attained through space research. 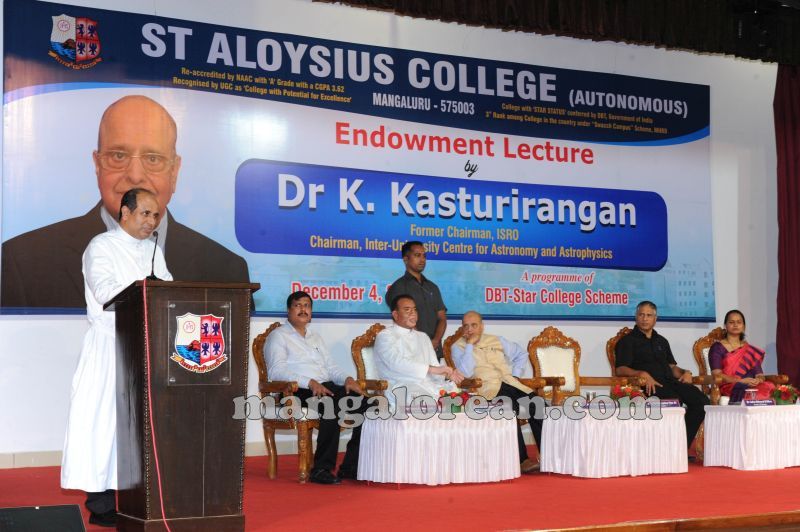 Dr K Kasturirangan in his lecture articulated about the history, the expanse and context of space exploration by various nations with relation to military, scientific and socio-economic development. He narrated the vision of the Indian space research organization mentioning how it meets the socio-economic needs of the society. He reminisced the role of Dr. Vikram Sarabhai in Indian space exploration, achievements of ISRO in the last 5 decades of Indian space exploration and the five major programmes of ISRO namely remote sensing, communication, broadcasting, navigation, space science applications and space transportation. 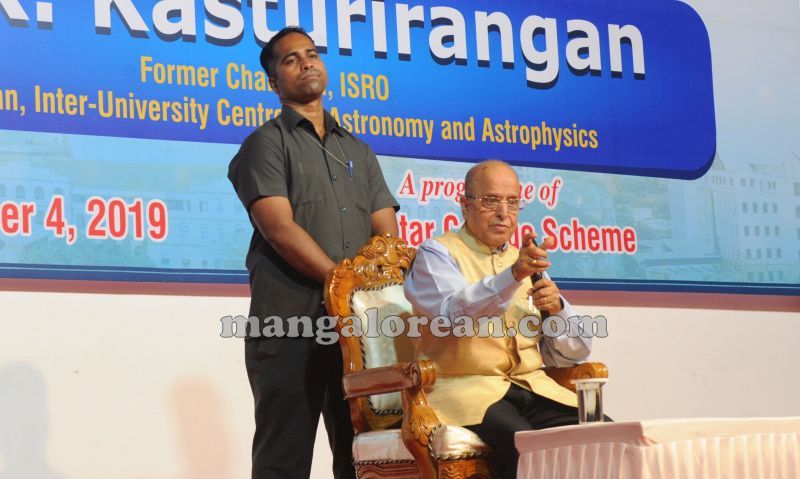 He also gave information regarding the application of IRS series of satellites in disaster management, environment and ecology, agriculture and soil management. He elaborated on the growth of ISRO through – PSLV, GSLV, GSLV MK-III, space vehicles. He also told about the future space missions of ISRO and other important missions of India in science and technology. He gave an insight into the timeline of Indian space launch projects; Chandrayaan 1 (2008), Mangalyaan (2013), Astrosat (2015)-the only multi-wavelength observatory satellite in the world and Chandrayaan 2 (2019) which have been milestones in world space exploration. 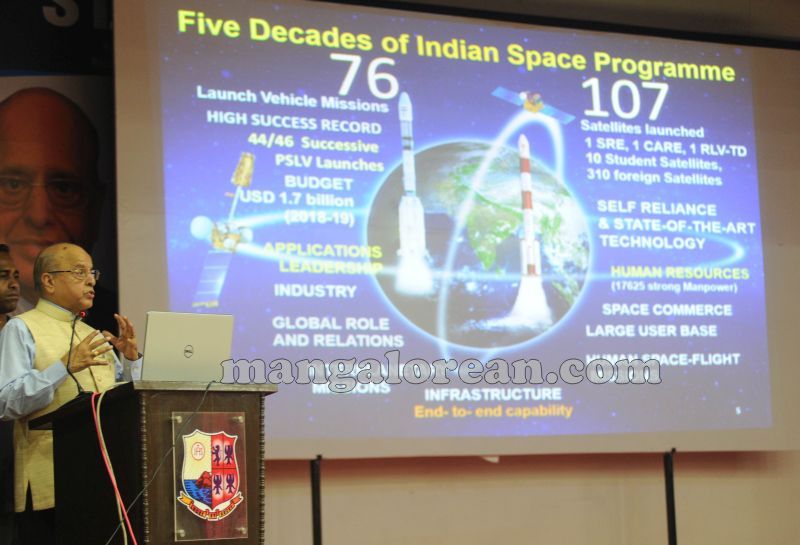 He revealed the future projects envisioned by ISRO; Aditya L1 and Xposat (2020), Venus Orbiter (2023), Chandrayaan 3 (2024) and ExoWorlds (2025) – the proposed exo-planet mission by ISRO. “This will be the most challenging mission of ISRO which intends to explore details of the precursors of life on other planets,” he said. He concluded his speech by quoting John F Kennedy, “There are costs and risks to a program of action, but they are far less than the long-range risks and costs of comfortable inaction”. 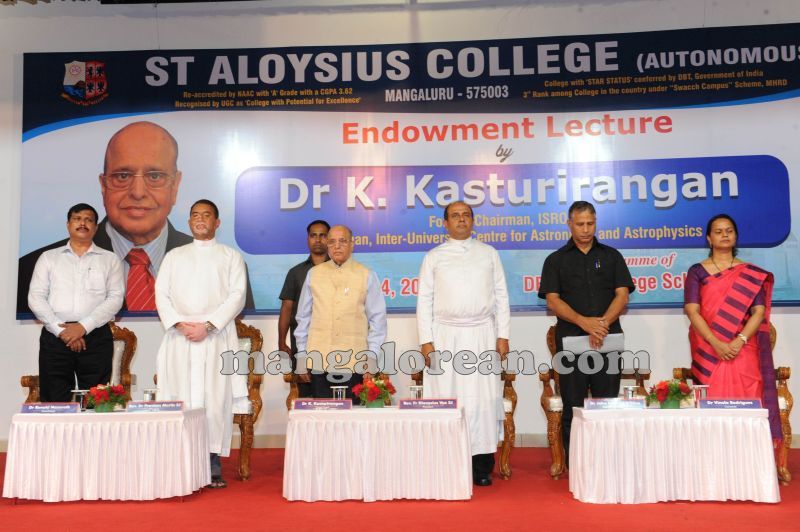 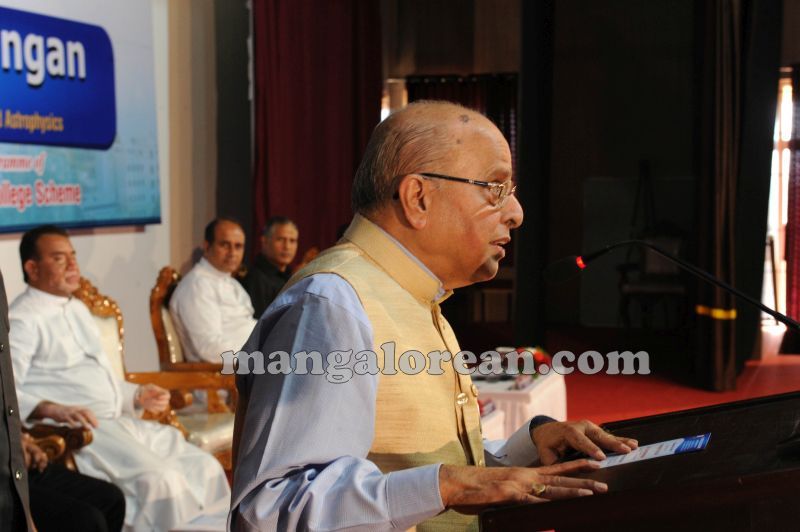 Dr K. Kasturirangan is currently Chairman, Inter-University Centre for Astronomy and Astrophysics (IUCAA), Chancellor, Central University of Rajasthan, Chairman, Public Affairs Centre, Bangalore, Member, Atomic Energy Commission, an Emeritus Professor at the National Institute of Advanced Studies (NIAS), Bangalore, and Honorary Distinguished Advisor, Indian Space Research Organisation (ISRO). Earlier, as Chairman of ISRO, he oversaw the space programme of India between the years 1994 and 2003. He was a Member, Upper House of the Indian Parliament (2003-2009) and concurrently the Director of NIAS, Bangalore and subsequently, Member of the erstwhile Planning Commission. Dr Kasturirangan was also the Chairman of the Committee entrusted with drafting the new National Education Policy (July 2017-December 2018). Dr Kasturirangan completed his Bachelor of Science with Honours and Master of Science in Physics from Bombay University and received his Doctorate in Experimental High Energy Astronomy in 1971 while working at the Physical Research Laboratory, Ahmedabad. His interests include astrophysics, space science and technology as well as science-related policies. 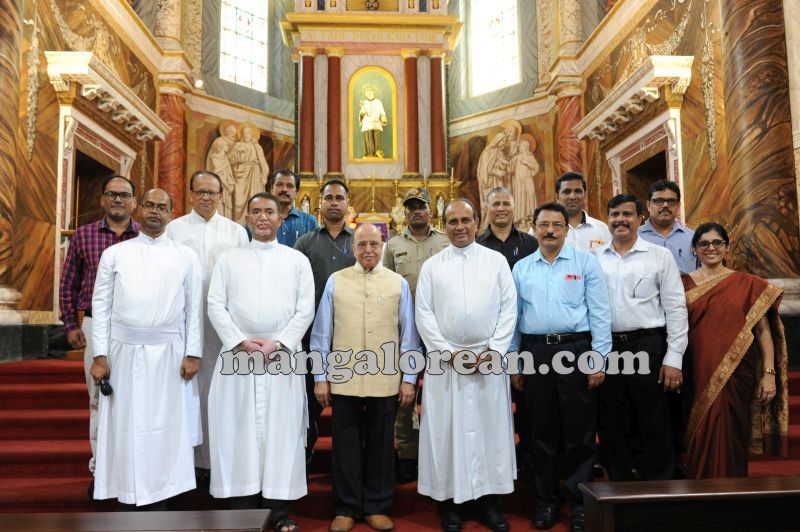